Today, we not only meet people in real life, we  also form friendships across the world through the Ethernet via Social Media.

And what’s even more fun is when these friendships are solidified in the flesh!

This week I met Michela Fantinel for the first time face to face. I’ve ‘known’ Michela for over a year via social media having ‘met’ her on Twitter as @rockytravel. Michela is Italian and is currently spending 3 months travelling solo around Australia. Her website Rocky Travel:

is all about travelling Australia. 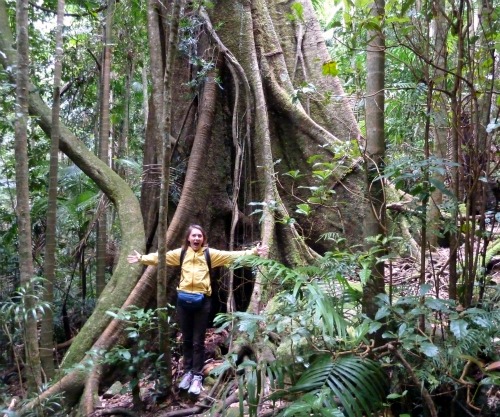 Although only 0.3% of the Australian continent is covered in rainforest , half of all of Australia’s vegetation types and one third of all Australian mammals and bird species call the rainforest ‘home’. It is therefore a special place and one worthy of overseas visitors 🙂 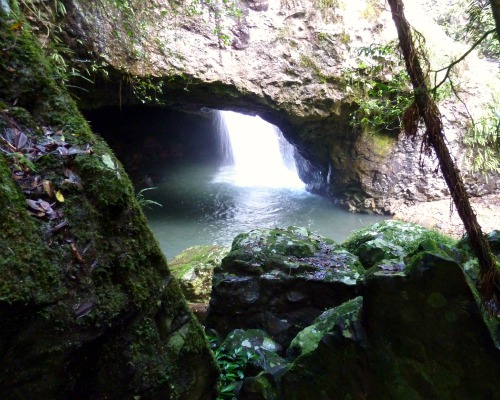 I first took Michela to Natural Bridge , which although only an hour and a half south of Brisbane in SE Queensland, is a particularly pretty little pocket of rainforest, with a stunning waterfall that cascades down into a cave through an overhead opening. I love Natural Bridge with its strangler fig trees and epiphytes (plants that use another plant as a host to grow off – ie they have no roots in the soil, they are an air plant) so will devote a fuller post to this spectacular spot in the coming weeks. 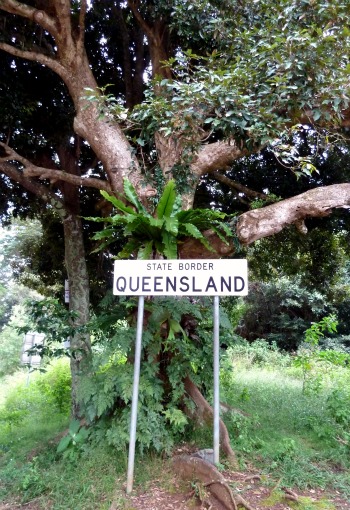 Just a few kilometres south of Natural Bridge we ascended the pass to cross the border into NSW, leaving Queensland behind. Once down in the Tweed Valley we turned west on the Murwillumbah – Kyogle Road to Wollumbin, Mt Warning. Mt Warning was named by Lieutenant Cook as he sailed up the east coast of Australia in 1770, and being the highest peak closest to the most easterly point of Australia (Byron Bay) it’s always the first spot to catch the sun’s morning rays each day. 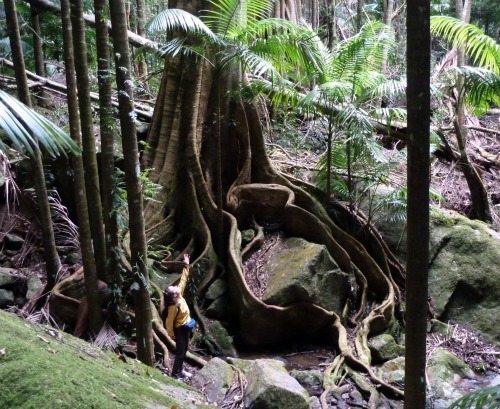 The lower slopes are covered in stunning rainforest vegetation and the size of some of these beautiful rainforest trees is quite staggering, as can be seen in the first photo of Michela at the top of this post, where she’s illustrating the breadth of a rainforest tree trunk – which must have had a 3-metre diameter.

The base of Wollumbin is a rainforest lover’s dream destination ~ I recently shared an image of the above buttress rainforest tree in a Photo Friday post (taken on a previous visit), but seeing Michela standing beside it really gives it some scale 😉 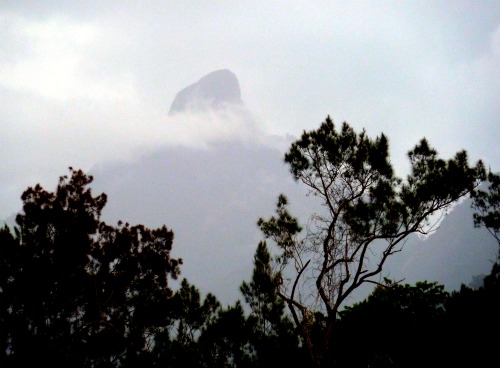 When we approached Wollumbin, Mt Warning was totally shrouded in a thick white mist, living up to its Cloud Catcher name

As we left, the volcanic plug peak briefly poked through the clouds for a fleeting glimpse.

Before visiting me Michela had had the fun of meeting up with many other tweeps who’s friendship she first formed on Twitter, such as:

Have you met face to face with someone you first met on Twitter?

Twitter – Are you all of a flutter? Or still sitting on your perch?

Add *your* story in the comments below