It was 3 years before the billionth tweet was sent.

Today, a billion tweets fly through the Ethernet every week 🙂

I joined Twitter two and a half years ago, then spent the first six months sitting on my perch observing – but as any little bird would know, you don’t get any worms up there. 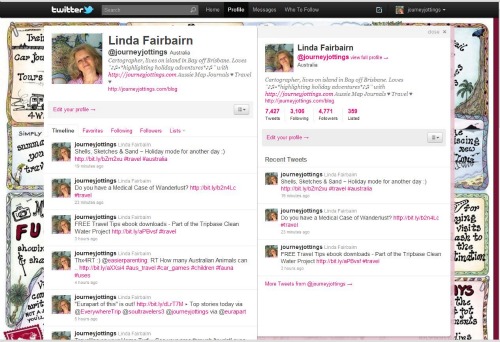 – You pop down the Main Street and bump into different people each day depending on who is out and about – As in any regular social street encounter you make passing comments. You hear highlights of news… personal problems… soaring triumphs. Over time these little conversations add up until as in real life, relationships develop and you become part of Twitter’s global community.

As in any community some relationships flourish and deepen, whilst others remain more superficial. That’s a reflection of life.

I’ve developed some fantastic relationships with people that don’t occupy my local neck of the woods so my engagement with them simply wouldn’t have been possible, if not for Twitter. This has led me to:

Connecting with holiday and tourism related businesses from as far afield as Cape York in Queensland to the Spa region of Victoria, and who we’ve gone on to supply with our Map Journals and Mail-It Maps.

Engaging with fellow businesswomen, resulting in meeting face to face at Tweet Ups when I’ve travelled interstate, where we’ve got to hear each other’s voices and the sound of our laughter.

Meeting with Tweeps on holiday when they’ve come to Queensland – and with whom the relationship has then solidified so I’ve engaged them to supply services to my business.

Connecting with holidaymakers and travellers who tell us when and where they’ve bought, or used one of our maps ~

And then to make contact as they pass on their travels around Australia. to say ‘Hi’  🙂  [I wrote a post about meeting up with traveller in Australia: Michela!]

@journeyjottings “Used your map to chart our journey from Perth to Adelaide, Linda – a great memento to keep.”

@journeyjottings “I saw your products sold in Uluru airport and shops at the resort! Pretty neat! I collect fridge magnets & got one of yours”

Unlike a village (or shopping centre) encounter

– On Twitter you join in any conversation with anyone.

Gary Vaynerchuk was the first I heard of expounding how he searched for people on Twitter talking about wines (his interest) to which he’d join in their conversation offering advice, help, assistance and so engage with potential customers.

I use the Twitter Search function to see who is talking about ‘travel’ in ‘australia’ and if I can bowl in with a suggestion of where to go or what to do, I will – I was recently contacted by a tweep in Melbourne who was moving to Brisbane and wanted to know if there was a cycle way crossing the Gateway Bridge – Within minutes he had an answer 🙂

– with the ability to chat to anyone, I engage with:

Fellow businesswomen, travellers, travel destinations and tourist attractions both here in Australia and from around the world.

I group my interests together into ‘lists’ so, to name a couple I have created a:

As numbers grow (I currently follow over 3,000 tweeps and have 5,000 following my antics) it makes it easier to see who is saying what in my various areas of interest, and is also a way of sharing with the wider community of Twitter users the connections that I’ve taken the time to make, so they can simply follow these lists if that is where their interest lies.

It’s fun the number of travellers who are using Twitter, and who are blogging about their experiences on the road. I get the impression many use Twitter as a pool for launching their blog posts, so Twitter is virtually a ginormous RSS feed. What a brilliant resource.

Go onto Twitter on any Tuesday at 9.30am and/or 9.30 pm Greenich Mean Time and you’ll see 5 questions based around the weekly theme – a travel topic or region – which are posed every 10 mins during the hour, using the hashtag* #TTOT.  (*No matter who you’re following, the #hashtag allows you to see any question or answer that contains this search mechanism: #TTOT). It’s therefore possible for anyone and everyone to follow the fast moving stream of conversation.

If you’re not already on Twitter go to Twitter Search and enter the search term: #TTOT. You’ll then see this week’s question and the myriad of answers that flow in from travellers around the globe, all purporting their views and suggestions on the topic –  Previous topics have included Oceania, Travel Photography, Round the World Travel, Wildlife Travel, Problem Solving on the road… Go to http://search.twitter.com and see what information you can glean from those on the front line.

Editor’s Note: There’s also a #expchat on a Thursday! Click #expchat for details 🙂

Its strange when you’ve been conversing with someone you’ve been seeing around the traps (or in Twitter speak ‘in the stream’) and they ‘disappear’, and you’re left wondering….  It seems I’m not the only one who worries!

Jack McClane, of A Blog About Nothing… Much put up a post last month asking did anyone know of the whereabouts of an active Tweep who last September ceased to post with a ‘final’ tweet saying:

“Sometimes being sick, lasts a long, long time. I haven’t had much energy to keep on things lately. I am getting better though!”

Having interacted with her I too was left thinking was she OK? How is she now? It’s interesting how deep a relationship can become through the Ethernet and in 140 character bursts ~ You’d think on Twitter one’s connections would be merely a fleeting tweeting passing in the stream relationship but real friendships are formed.

Twitter is a village on a global scale where you meet people beyond the confines of your geographic area, and are able to directly approach anybody from any echelon, without any fanfare (with 140 characters to play with, things have to remain concise and to the point).

– As they are in real life!

On the face of it, Twitter may appear to be a stream of instant messaging, but instant messaging doesn’t equal instant friendships or acceptance into the fold. Relationships whether face to face or in the Ethernet require constant work – They can never be taken for granted.

Today, the fabric of traditional ‘village’ life is being replaced with sprawling suburbs and characterless shopping centres. More and more people are working from the confines of their homes where Twitter is a way of connecting, communicating and spreading the word. It’s a global village of gossip, which in some cases spreads like wildfire (or in Twitter speaks ‘goes viral’) or is left to quietly flow down the stream to be lost at sea.

If you want to know the global ‘gos’ – Twitter is the place to be!

Who have you got to know?

26 thoughts on “Twitter – Are you all of a flutter? Or still sitting on your perch?”