It was a perfect Queensland autumn morning in the Bay off Brisbane. 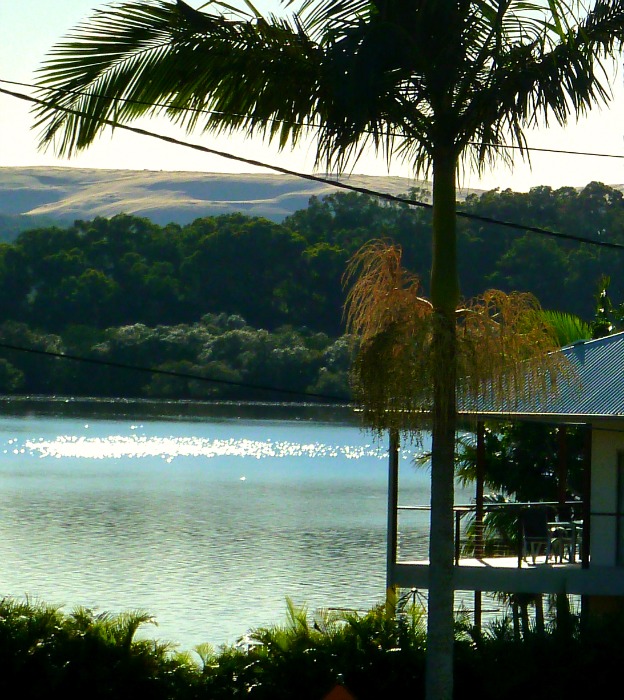 After weeks of rain, the excitement of seeing a sky of blue and a sea sparkling like diamonds had me out of the door and off on a morning walk in the woods before settling down to my day job – Hand drawing pictorial journal-maps for Journey Jottings (which for the curious, helps you record your travel memories on a single sheet!). 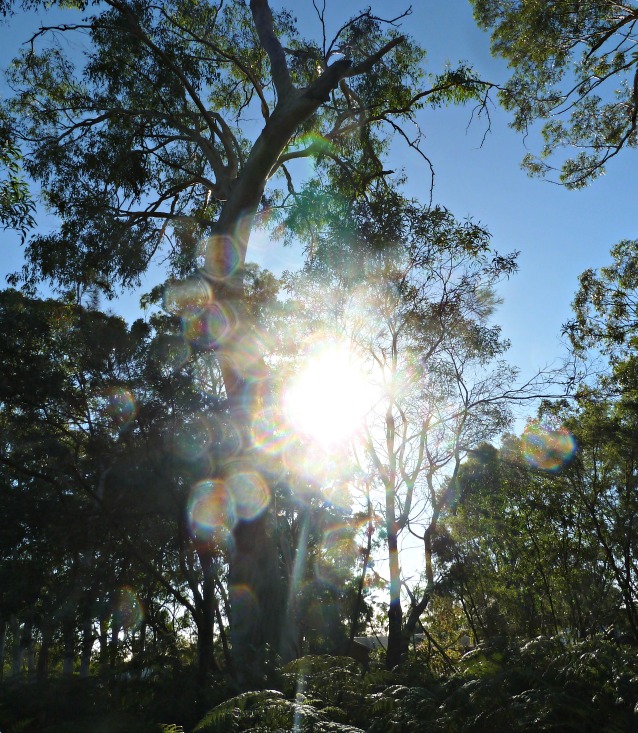 Walking in the Eucalypt Woods

The sun shot shards of light through the eucalyptus branches spotlighting bracken ferns on the forest floor.

While areas filtered by the silvery eucalypt leaves formed shady glades of dappled contrasts in the leaf litter. 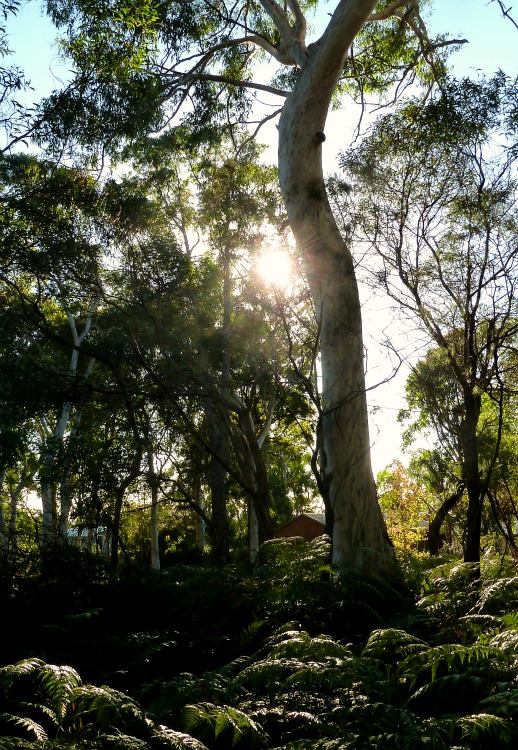 Soaking up the warming rays I was walking with my head tilted skyward, only glancing downward in momentary bursts (to check where I was going) when something out the corner of my eye grabbed my attention. 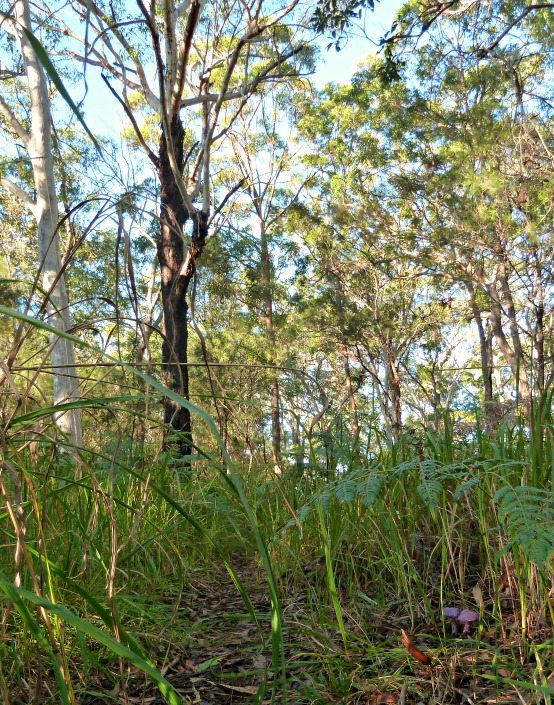 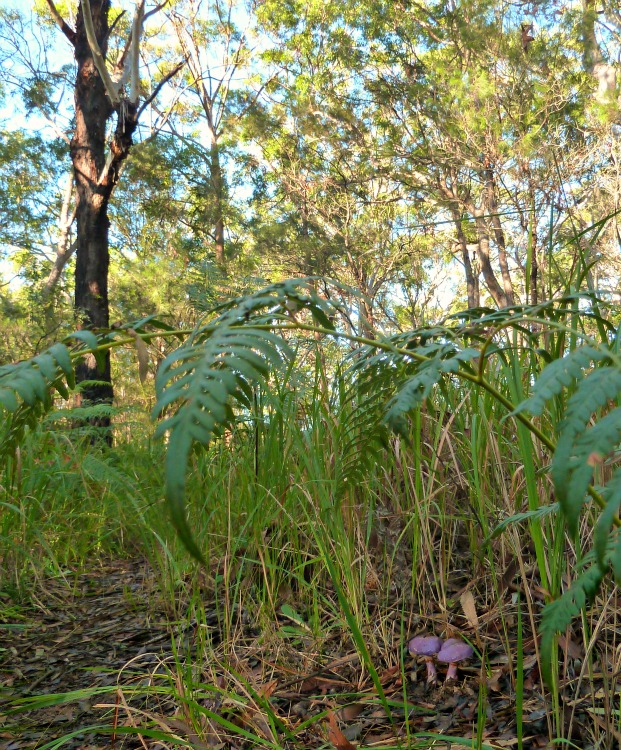 A little splash of purple sprouting in the composting leaves. 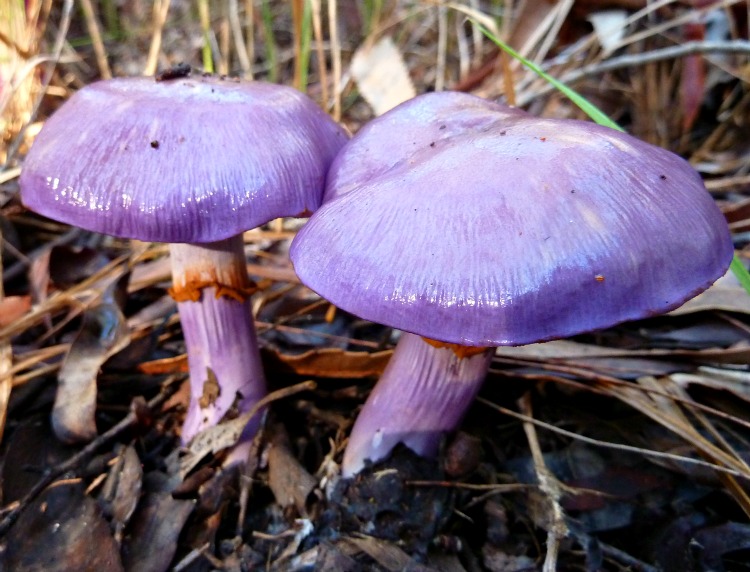 What a delightful find!

A Purple Cap –
A member of the Cortinarius family –
From what I can ascertain a  Cortinarius archeri.

There are over a 1,000 species within the Cortinarius family, so named for the cortina they all possess, which is the thin veil like covering on the underside of the cap protecting the immature spore bearing surface.

Once broken, and the spores are released a rusty coloured ring becomes visible around the stem called a spore print –
Which it appears is the stage my fungi were at! 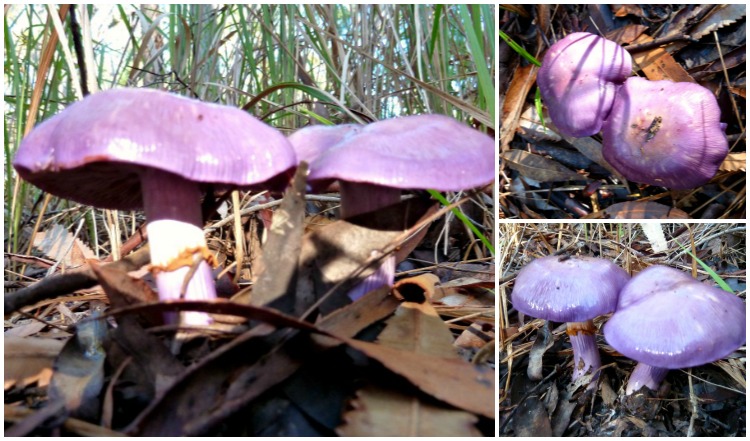 Fungus (plural fungi) unlike plants, produce no chlorophyll; their energy being sourced underground as they feed and grow in a mycelium, which is a network of microscopically thin cobweb-like threads called hyphae. Their real work goes on unseen below the surface where the fungi are critical nutrient recyclers, decomposing the forest debris making rich compost for future propagation.

Their fleeting appearance above ground is merely to fruit.
The work of this beautiful purple cap is the fungus “flower”, perched atop its stalk raises the fruit bearing mechanism to improve its spore (seed) distribution. 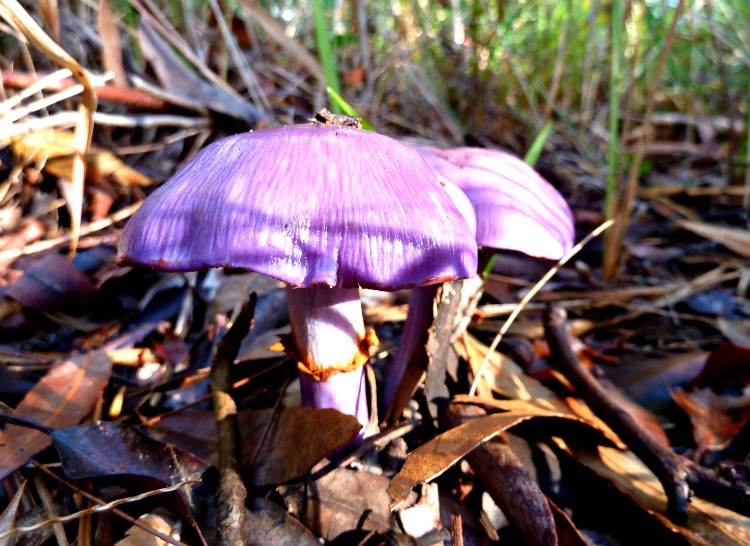 One autumn, when walking on Stradbroke Island I came across a
bevy of Australian fungi.
But this solitary splash of purple in the undergrowth was not only more startling,
it was simply… special 🙂

What fabulous Australian fungi have you spotted?

Have you ever seen a purple one?

14 thoughts on “Fabulous Fungi in Australia. Have You Seen A Purple Mushroom?”