Long and seemingly endless, they’re bordered by an expanse of bush vegetation that imperceptibly changes until there’s a sudden realisation you’re driving through a different vegetation zone. 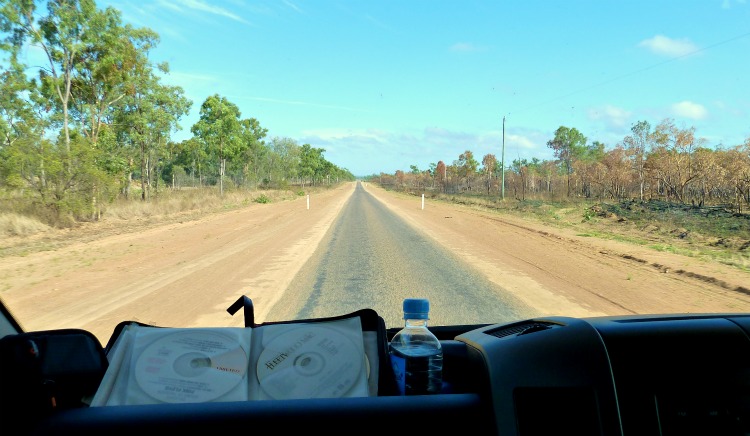 Some might call the landscape monotonous, but sitting back at the wheel of your vehicle of choice, free of any manic city traffic, it’s an amazing experience taking in the immense vast nothingness that lies ahead of you… falls away beside you… and disappears over that conquered horizon behind you…

Until, that is, when glancing up at your rear view mirror to enjoy that disappearing horizon line you’re confronted by the sight of…

this monster looming down on you. 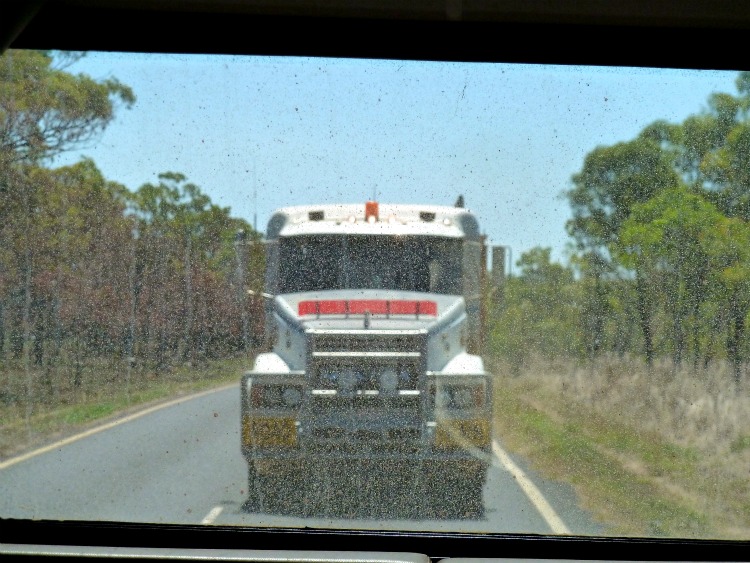 Its only a truck, (you tell yourself) but it approaches like a tornado, feeling as though its tearing up the tarmac as it travels at the max, which for road trains in NSW, Qld & SA is 90 kph.

You on the other-hand are trundling along at 80 kph to take in the scenery and soak up the view ~ He’s at work, you’re at play.

There’s a bristling when next glancing up at the mirror –

Is he maybe trying to tell you something? 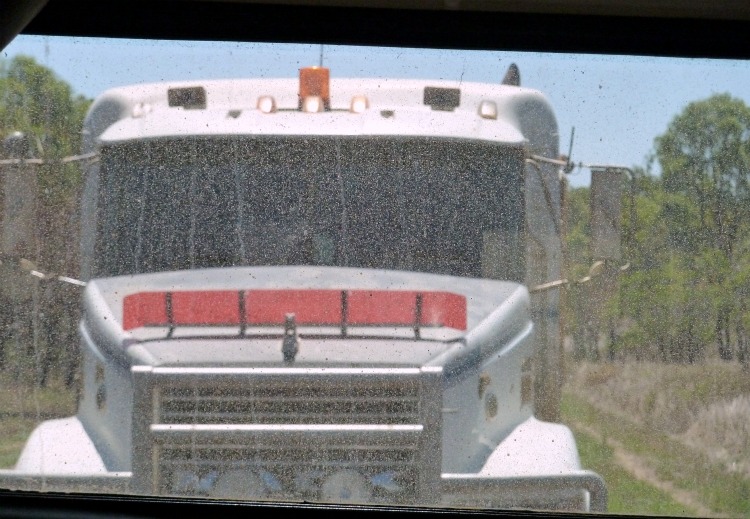 Can he seriously get any closer without joining you in your cab?

Pulling a 6 berth motor-home over onto an outback gravel shoulder at 80 kph isn’t really an option, and applying the breaks (to slow down sufficiently to tackle this manoeuvre)  doesn’t seem like too good an idea either, with 100 tons of rolling stock sitting on your tail :/

So you focus on the road ahead to keep steady.

Gripping the steering wheel to hold the vehicle firm, you’re suddenly aware of a sucking sensation. 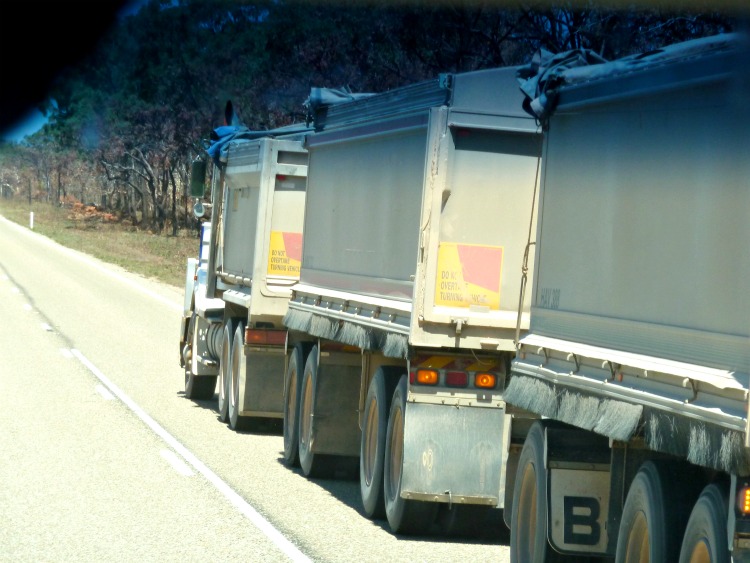 Hanging on for dear life, you withstand the vortex that desperately tries to suck you into their space with mere centimetres separating you, as you both thunder at what feels like break-neck speed, when…

With white knuckles regaining some colour, you settle back to enjoy the view that lies ahead of you… falls away beside you… and disappears over that conquered horizon behind you… 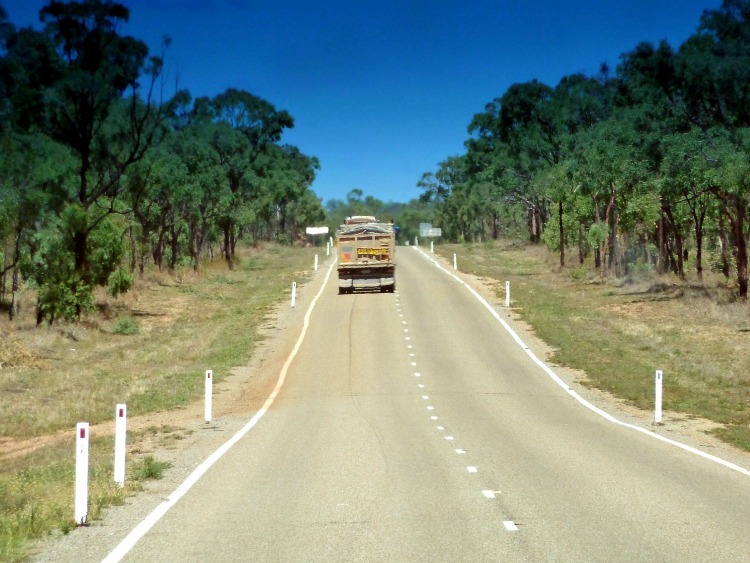 While road monsters are found in some states of America, Mexico and Canada (known as  Long Combination Vehicles ~ LCVs), Australia has the largest legal limit – some topping 200 tonnes, although 80 – 120 tons is the norm. Some have up to four trailers, reaching 55 metres in length.

Rivalry in Australia for driving the longest road train started in… 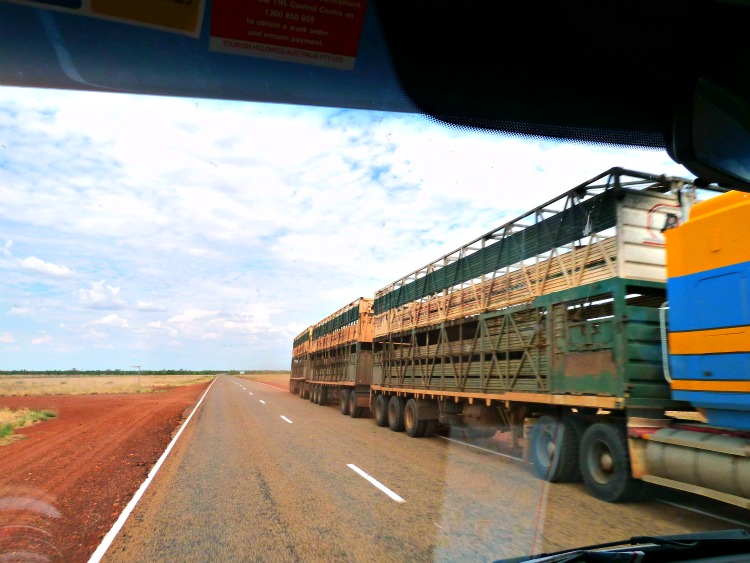 Road trains are most commonly used for transporting livestock, fuel and mineral ores .

They’ve played a significant role in the economic development of Australia’s remote areas where communities rely on being able to ship produce out to mainstream markets, whilst receiving regular supplies in to replenish stocks of food and basics.

Road trains are descendants of the old steam traction engines.

Designed to pull multiple wagons, steam traction engines were used in military manoeuvres as early as the Crimea war (1853 – 1856).

But it was not until the 1940’s that the South Australian Government introduced a fleet of 8 wheeled military trucks, pulling two or three 6 metre (20 foot) trailers to transport freight and supplies to the Northern Territory, taking over from the Afghan camels that had been operating the desert route since the late 1800’s. 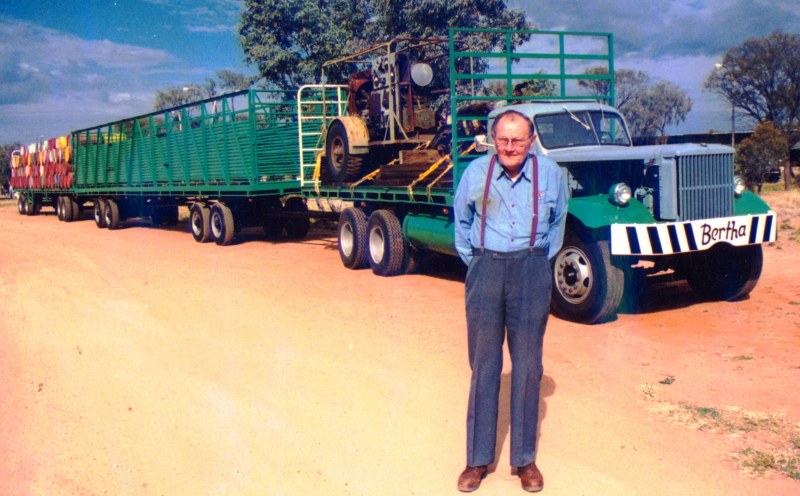 Australian Kurt Johansson, (pictured above in 2005) is recognized as the inventor of today’s road train.

The story goes that having transported 20 stud bulls to an outback property the station owner posed the problem of how to transport 100 cattle, five times the quantity, back out.

Inspired by the tracking ability of the SA government’s military wagons Kurt Johansson developed a system that had steering wheels on each trailer making them easier to manoeuvre the narrow bush tracks and creek crossings.

The Diamond T980 Kurt developed was called ‘Bertha’ and is now housed in the National Road Transport Hall of Fame in Alice Springs. 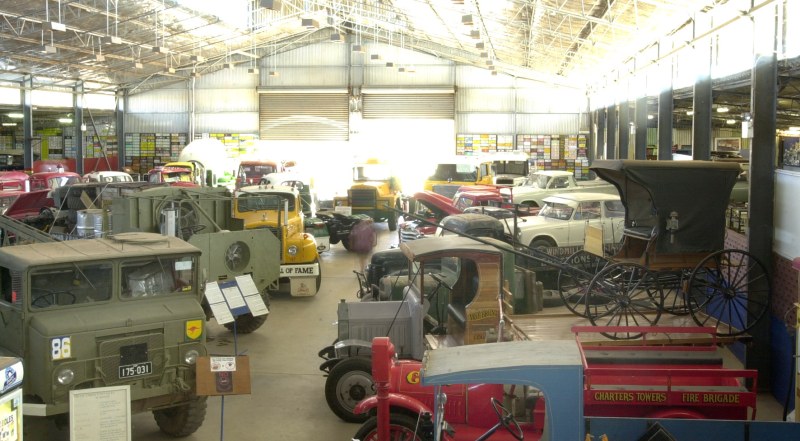 Photo from the National Road Transport Hall of Fame

Opened in 1995 the National Road Transport Hall of Fame‘s charter is to show the vehicles “as they were in their working lives, including the crude modifications and adaptations that “bush mechanics and engineers” had to undertake to ensure they could perform in Australia’s harsh working environment.”

Viewing their collection of outback monsters is a must when in Alice Springs. 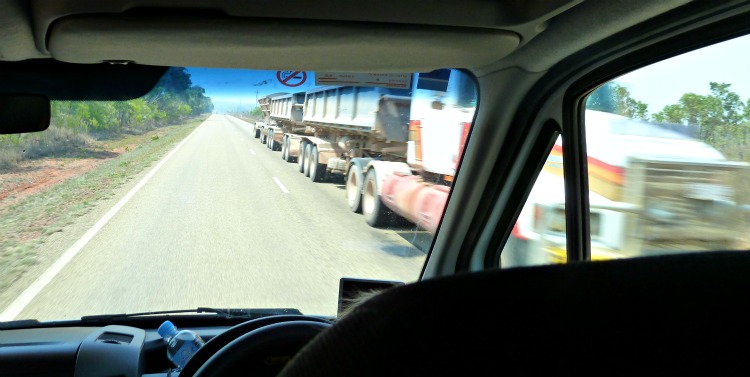 But it still doesn’t make passing them any easier!

Is it just me being wussy?

Do you feel intimidated by these road monsters?

Do share your road train monster moments in the comments below 🙂

9 thoughts on “Monsters of the Outback… Road Trains”