Last year, I initiated a monthly post where I looked back at the preceding 4 weeks and using one of the 11 boxes surrounding our hand drawn Australia Map Journal, recorded a *highlight*. 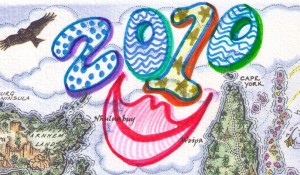 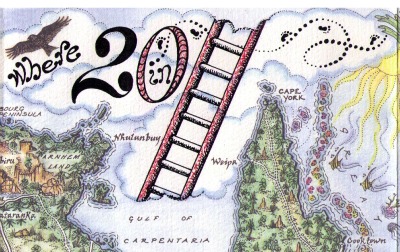 In January, our Map Magnet manufacturer moved their operation to Brisbane!

Our products are therefore not only Australian Made, but they’re all produced within a 100 km radius of our office ~ Our magnets… 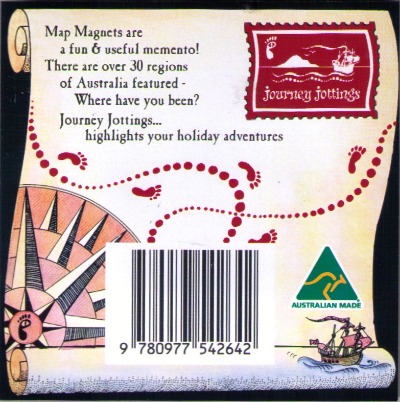 …our printing, our travel wallet manufacture and display box production is all created in Brisbane.

Its a bit like the 100 mile diet, which is a diet consisting of food only grown within 100 miles of one’s home, except in our case its manufacturing all components within a 100 km radius of our office so its the 100 kilometer product 😉 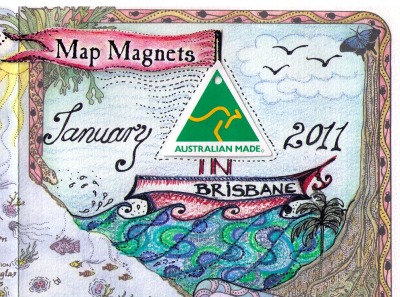 My illustration for January 2011 *highlights* the celebration of launching our locally made magnets, but also reflects the dreadful wet weather circumstances that occurred as our first batch rolled off the Brisbane production line.

After months of rain (due to La Nina) Brisbane river devastatingly broke its banks submerging tens of 1000’s of homes and businesses.

This link shows remarkable before and after aerial photos ~ http://www.abc.net.au/news/infographics/qld-floods/beforeafter2.htm

The flooding of the Brisbane River came after three quarters of the state of Queensland had been declared a disaster zone due to widespread flooding that covered an area the size of France and Germany.

The aftermath of this water deluge was still being contended with when a category 5 cyclone Yasi bore down on northern Queensland ripping apart homes and businesses around Tully and Mission Beach.

This was followed by extensive flooding in Victoria and Melbourne.

While Perth, Western Australia was facing bush fires that tore through and destroyed 72 homes 🙁

With so much adversity it’s been hard to concentrate and focus, but small businesses pushing forward is critical for an economy now having to budget a major rebuilding and recovery programme.

Were you personally caught up in any of these awful freaks of nature?

Did you have friends or relatives affected?