What delectable tasty’s have you relished?

What horrendous ‘foods’ have passed your lips?

What gastronomic delights have you savoured on your travels from around the world?

It was NOT a pleasant experience! I certainly showed all the signs of a young, naive backpacker. At the young age of 21 playing grownups in a nice restaurant in rural England, we were waiting to be seated at our table. Our table wasn’t quite ready and so they seated us at the bar. They served us drinks and pre-dinner nibbles of which I had no idea what they were. From the shape I decided they were miniature chicken eggs (they were weenie!). I thought I may as well try one, popped it in and … crunch, crunch, crunch! I later learnt they were quail eggs & I guess they needed peeling! How silly did I feel? lol I’ve always been one to try the local treats when travelling, when our Peruvian friends met us in Lima, Peru they told us that the Peruvians eat cuy ( guinea pig), although I had a pet when I was young, I said I’d give it a go. We started the meal with a glass of Inca cola ( a local soft drink that is a lot like creaming soda) and followed with a Pisco sour…a not so soft drink..when the little cuy came out roasted with a carrot hat it almost looked too cute to eat, but I was hungry…it tasted like chicken (doesn’t everything??) Later in our trip we visited the Monastery of Catalina in Arequipa, peeking into a room near the kitchen we found the floor covered in guinea pigs darting around, had we not know better we might have thought that the nuns had a collection of fury little pets! 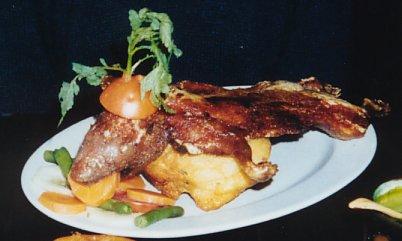 Well, this is more of a food street vendor story, never buy from one (I cringe thinking about it). London in the late sixties, a friend’s family who ran a business of hot dog vending machines, little trollies on four wheels, which had a big pan for boiling Frankfurters, another for boiling dehydrated onions and a box with the rolls in. We used to sell at all the London football clubs on weekends and set up on a street corner to catch the crowds as they left the stadiums. Once the crowds had gone we threw the barrows in the van and trundled home until the following weekend when we were out on the streets again. Rolls from the previous weeks were not ditched but warmed up to freshen them up a bit. Quite often rolls from several weeks previous would linger gathering mould patches but still we never threw them out! Just warmed them a bit, scraped off the mould and out they went, as did the older hot dogs. Our catch cry was “Walls hotdog ‘n onions, all fresh”   🙂 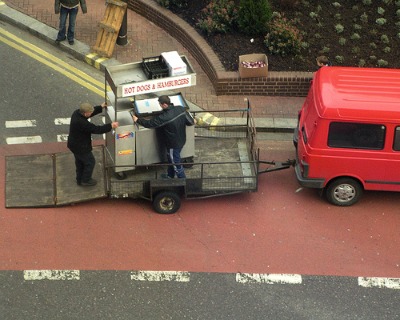 Back in about 1980, I was returning to the UK after a hitchhiking trip across Europe and ended up in the town of St Malo with about 8 hours to spare before the ferry back to Plymouth. I stumbled across a small restaurant in the back streets which was a “Routier” recommended eatery – in those days they were primarily for truckers. Tucked into a fantastic seven course set menu which took about 2-3 hours to consume. Everything you would expect of “plain” French cooking. Loads of it and it was all yummy!

When hitchhiking you often go without sleep and having consumed a bottle of the house wine with my meal, I was overcome with a feeling of drowsiness. About 4 hours later, I woke up, still sat at my table to find that I now had to move to get the ferry. I apologised profusely for using the hotel as a hotel and was told in no uncertain terms that it was perfectly OK with the owners and invited back again “any time”. Have never been back but have always remembered the great hospitality, great food and the extremely cheap feed.

On holiday in New Zealand I went out with my family to collect fresh mussels and pippies. We ate the mussels the same day and the pippies were left overnight in seawater to purge the sand. To help things along we fed them weetbix to work the sand through their system. This trip will stick in my memory as one of the first times I was able to demonstrate to my three year old the link between her food and its source. 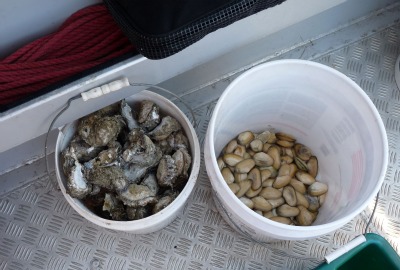 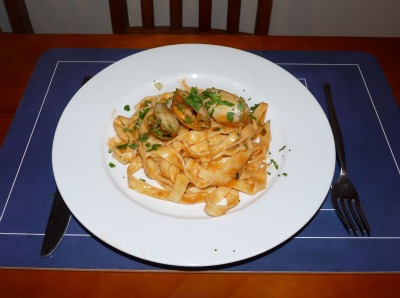 During my trip to Aichi Prefecture in Japan last July, my wish was to sample the freshest sushi available. In one particular restaurant, the specialty of the house was fish prepared “ikizukuri”-style. A chef used a special technique to remove all of the meaty parts from the fish, while leaving all of the organs intact. When my meal was brought out, the sashimi was presented on top of shredded daikon as usual. Not so common… the daikon was the only thing separating my meal from the fish that is still breathing on my plate! 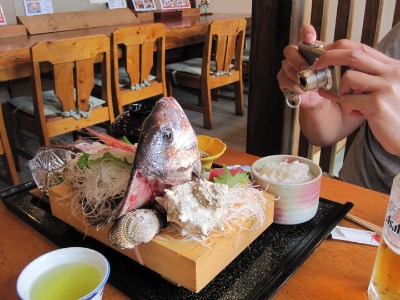 What FOOD tale do you have to tell?
Please share in the comments below 😉