What was your ‘Favourite Journey‘?

We had 20 fabulous responses, in these blog posts 😀

This month Genevieve suggested we recount tales about:

we’ve experienced or done whilst travelling ~

Helen Crozier
Staying in a wonderful palace in Florence…. I met and sort of fell for an English ‘boy’. After seeing the wonderful operatic performance of Aida in the Verona amphitheatre he asked me to join him and his sister to travel to Venice. I had experienced only one day in Venice but of course wanted to go back so i said yes. Once in Venice after being serenaded with buskers in St Marcos Square playing the theme to Blade Runner he asked me to accompany him to Hungary which was still under communist rule.
We went to Vienna to find a visa then caught the train to some small town in Hungary. Unfortunately I had to return to Italy to catch a connecting flight & the holiday ‘romance’ was cut short. We embraced at the train station and promised to reunite… but I was left on my own at the train station . A huge gun in my face was enough to force my tired brain to spit out enough German to persuade them that I was harmless & began the long journey to Rome. 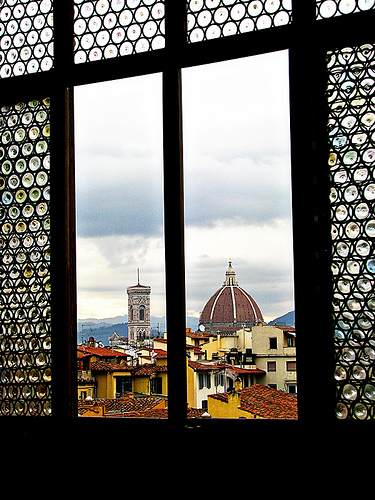 Genevieve Frew
In New York, in 1998, I got separated from my partner and his children whilst buying Lion King tickets. Walking downtown with my baby daughter (in a stroller) and 14 year old stepson, we saw three young men standing about a metre from us, arguing in a quiet manner. We stopped to cross the road when, all of a sudden a police car screamed into the intersection (Starsky and Hutch style) and armed police jumped out yelling the obligatory “Freeze; Police”. They pointed their guns at the young men but we were so close to them that the guns were aimed right at us. Whilst still waiting for the lights to favour us, about ten more police cars arrived on the scene with more men, all pointing guns at us – I counted about 20. Of course, time slowed down, but when the lights changed, my legs were rooted to the spot. I looked at my baby and stepson, then at the guns, and then at the children again.
As we gingerly left the scene, I knew I had a scary story to recount for the rest of my days. 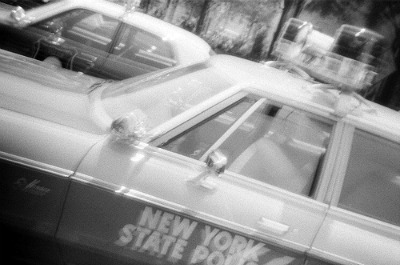 May King Tsang
I flew to Denver for work and a friend whom we’ll call ‘Dave’ kindly held a party in my honour. So after a 10hr flight with no sleep, I arrived, was having a great time, when he took us downtown. As we got there, the group split into two but I was with Dave’s friends. We popped into a bar thinking we’d join Dave later, I got talking to a girl and when I looked back, Dave’s friends had gone.
I told my story to a guy selling roses outside and he very kindly offered to help me find Dave. But after a while we gave up and Rose Guy (RG) offered his couch for the night. With no ID on me I had no choice. The next day he drove me to an internet café, I found Dave’s no. via a UK friend; he picked me up and we treated RG to lunch to thank him.
I have a memento as Dave bought me an Avalanches ice hockey jersey to say sorry. It’s one of those ‘what might’ve happened’ stories, but RG was definitely my angel as he took me under his wing to ensure my safety 😮 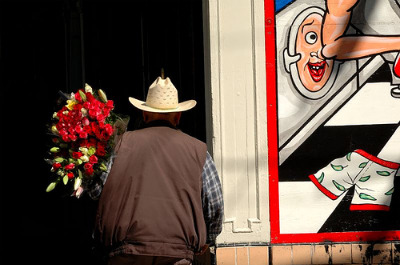 Genevieve Frew
New Years Eve 1986. I convinced my then fiancé to go to Scotland for Hogmanay despite not having booked any accommodation. We drove to Inverness, thinking we could find something there but, of course, everything was booked out and the only hotel available was the deluxe one which we couldn’t afford. We drove around and around searching for a room and went as far as Aviemore, a ski resort town. We found nothing. We ended up sleeping in the rental car by the side of the A9. We had to turn the car on every half an hour to get the heater going as the temperature was well below freezing. I went to pee in the frozen grass in the middle of the night and was so cold and sleepy that I dropped the car keys, which we had to rummage around for in the wet, cold and stiff grass. It was certainly a night to remember.

Claire Lane
Bought a combined ticket from KoPhangan, Thailand – Singapore via ferry, taxi and buses through Thailand & Malaysia. Survived overnight ferry trip, got dropped off at bus station by taxi. No sooner does it leave but we discover it’s the wrong bus station – a local one, in small Thai town, no-one speaks English, no buses going anywhere near SIN. Man comes up saying he’ll help – calls the head office number shown on our ticket. Tells us he’s sorted it, to get in a ‘taxi’ with a man. V scared but no other choice…Driven to rural Malay/Thai border, told to get out & wait. Hours later, 2 motorcyclists come and tell us to get on, me on one, my boyfriend on the other. V scared but again, no choice, we are in the middle of nowhere. Ride over border, get dropped at another bus station. Gesture us to get on a bus. By this time, no idea where we are or if we’re safe, but we hop on.Some hours later, we arrive in SIN-earlier than we were scheduled to! 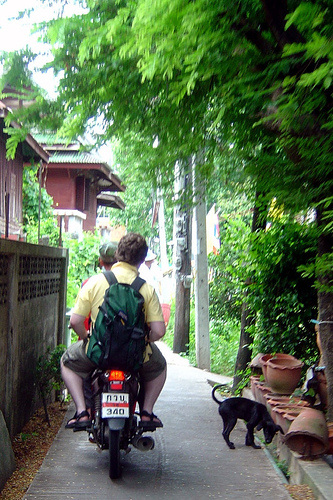 Frances Jones
I’ve got a local story. When I was at Sydney Uni, I had a friend Dominic Natale. One afternoon, we saw big thunderclouds, it was wild weather. What did we do? We went to Circular Quay and hopped on a ferry to Manly. Big waves, standing up we nearly got thrown overboard but it was so much fun. We caught the last ferry back, the rest were cancelled because the waves were so rough. We were drenched. Dom passed away not long after that, but I have really *fun* memories of him. 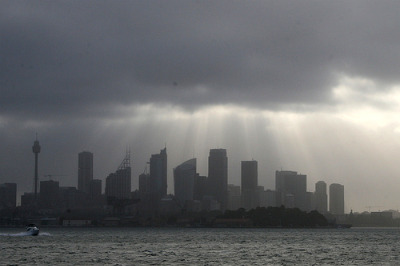 Debbie Ellis
Arriving late at night in Varanasi totally exhausted & disorientated from our travels, we were accosted by a drug crazed hotel touter who followed us screaming abuse. It was frightening, but we finally managed to lose him in the maze of dark alleyways.The next morning we rose before dawn to take a rowboat ride on the Ganges to watch the sunrise & view the Ghats.Passing the burning (funeral) Ghats we saw two dogs fighting over the remains of a dead baby, a shocking stomach churning sight. Babies are not cremated they are wrapped & thrown into the river. To top it off on the way back to our hotel I was nearly gorged by a bullock running out of control through the narrow streets!

Micky Stuivenberg
My scariest travel story? Being chased by a rhino! Holidaying in Nepal, my husband and I plus a German backpacker joined a local tour guide for an early morning walk through Royal Chitwan National Park. “Rhinos won’t attack, but if one should, just stand very still,” were our instructions. Suddenly, the guide bolted through the forest. What should we do? We heard & saw something coming towards us. Stand still? No way, we followed the guide, as fast as we could. After about a minute, the guide had stopped, the rhino had too. It was a mother with a newborn, very protective. Different rules. Right. Later, we heard that people actually get killed by rhinos in that national park every year! 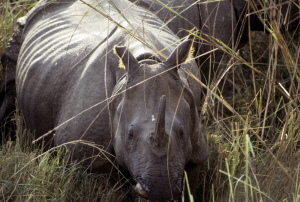 Sally Foley-Lewis
When living in Germany, I was asked to chaperon a young person on a trip to Prague. I agreed thinking, this’ll be cool, I get to go to Prague for 3 days! What I DIDN’T consider was the bus load of party animals that also were heading to Prague! I didn’t mind the drinking or the all-night singing, yelling (and possibly swearing – my German wasn’t that good at that stage)! What got me was the behaviour of 2 young guys at the Czech. boarder control; hungover (or probably still drunk) they decided to be a bit smart with the officials. Solution: threaten a full body cavity search! The bus was remarkably more quiet and sober from the boarder all the way into the gorgeous city of Prague! 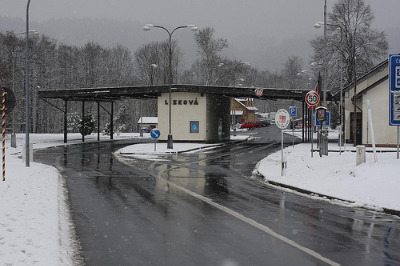 Suellen Hughes
Back in 1990/91 my husband was working abroad in Trieste, Italy and I was on a spouse visit. While he was at work, I decided to go exploring, what was then Yugoslavia. I had a lovely day but when it came time to head back, I got completely lost. I had a map which I was having trouble reading but no phone, no Yugoslav currency & it was now getting dark. I started to panic when I saw military tanks and men with guns by the roadside. I found a small inn and pulled in hoping to use the phone. When I opened the door, it was like the movie “An American Werewolf in London” – they all just stopped talking and stared at me. I indicated that I wanted to use the phone but then couldn’t work out how to call Italy. I jumped back in the car and started driving in what I hoped was the right direction & luckily for me it was. I finally made it home, late but safe. Not the best idea to head off into a country in the middle of a civil war so unprepared. Character building though and I learned to be better prepared when traveling alone! 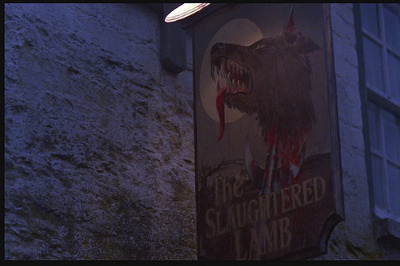 Still from movie "An American Werewolf in London" (1981)

One thought on “Crazy, Stupid and Scary Travel Tales – Part 2”