I’m a great believer in slow travel –
Both when on the road, and when at home!
I get a real thrill discovering what’s in my back yard and seeing it through travellers’ eyes –
So I’m always taken aback when meeting up with local folk, and the topic of recreation comes up and I can’t help myself from enthusing…

“Isn’t the rainforest up in the Lamington National Park and the Border Range (that separates Queensland from NSW) absolutely stunning!”

And you get a blank face in response –

“Rainforest?” they say, “here on our doorstep in south east Queensland? You mean do-able in a day from Brissie (colloquialism for Brisbane!)?”

Yes – and not only that – Its the most ancient remaining vegetation in Australia dating back to when Australia was part of Gondwanaland. 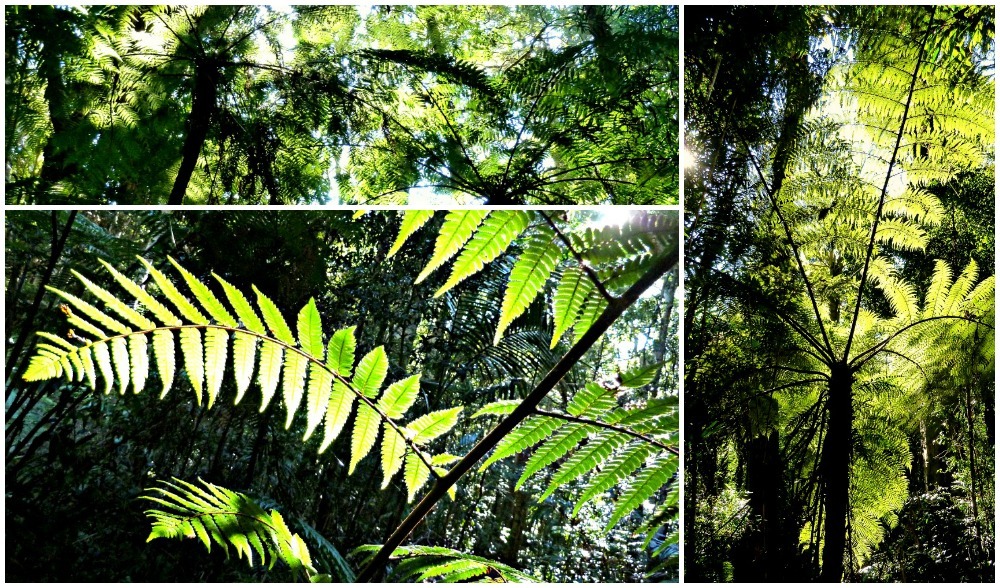 Daves Creek Circuit is a walk that starts out from the Binna Burra end of Lamington National Park (100 km south of Brisbane) is touted as having the most varied vegetation throughout its 13km (8mile) path out of the mixed bag of walks – long and short – at this end of the Park –
So, as a tree-hugger and lover of plants, a walker (not a hiker!) this was without a doubt the most obvious choice for a weekend outing.

It was also going to be a test –
Five years earlier my husband and I had done the Box Forest track – that starts at the other end of Lamington National Park at O’Reilleys – and as we headed down the home straight on the last couple of km of that 10.6 km bushwalk my husband’s limp and pained expression got progressively worse –

He finally succumbed to a hip replacement operation earlier this year – and hey presto here we were about to set out on our first 10 km+ bushwalk together since that poignant day! 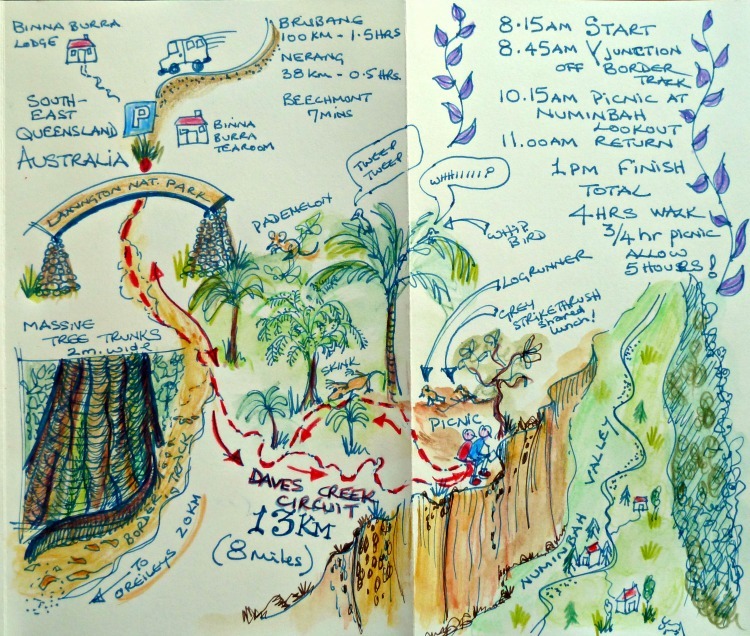 To get an early start, we stayed at an AirBnB just 7 minutes drive from Binna Burra in a small enclave of houses called Beechmont. So shortly after 8am our boots were laced, the picnic was packed and we were making our way under the stone archway declaring Lamington National Park (just beyond the Binna Burra Lodge and tearooms) and were soaking up the beauty of this rich sub-tropical rainforest.

The start of the Border Track at Binna Burra

The first 2 km (1.25 miles) follows the Border Track – a 20km (12.5 mile) hike that connects Binna Burra to O’Reilleys at the other end of the National Park –  Huge root structures at the bases of the trees and swirling vines twist their way anti-clockwise ever upward in search of the light and even corkscrewed across our trail (see photo above).

After about half an hour we left the Border Track, taking the left hand path at the signposted Y junction and started a gentle descent.

The path gently hugged the side of the wooded hill

As the path got closer to the edge of the escarpment that would finally give us views of the Numinbah valley the vegetation certainly did begin to change.

After passing a massive upturned tree, with seriously the most massive roots – 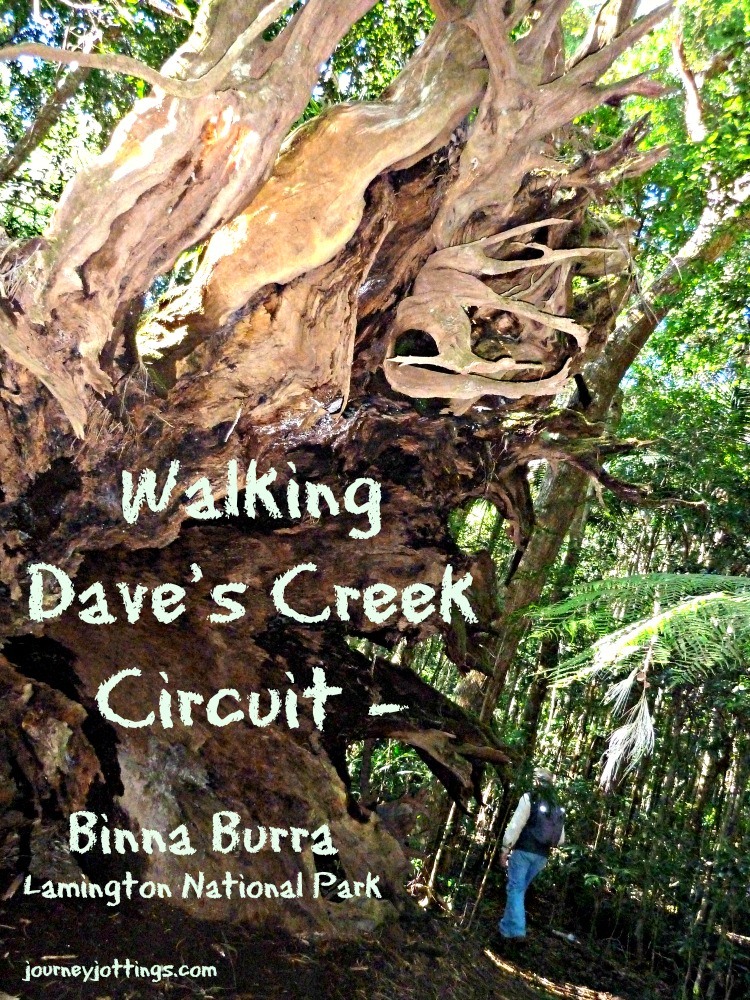 The woodland became more scraggly as mallee and heath took over until the path hugged the edge of the rocky cliff face adorned with grasses on one side and opened up to the cleared open farmland of the Numinbah valley below on the other.

The natural and varied vegetation seen on Daves Creek Circuit

As we approached Numinbah lookout – our halfway point, we stopped for a picnic lunch of sour dough spelt bread with cashew cheese and salad, followed by a piece of date and walnut loaf – Gosh food tastes soooooo delicious in the great outdoors, especially after a couple of hours on the move – and what a glorious view over the valley below.

We even had some company – A Grey Shrike-Thrush joined us and was game enough to take a few crumbs from our hands! 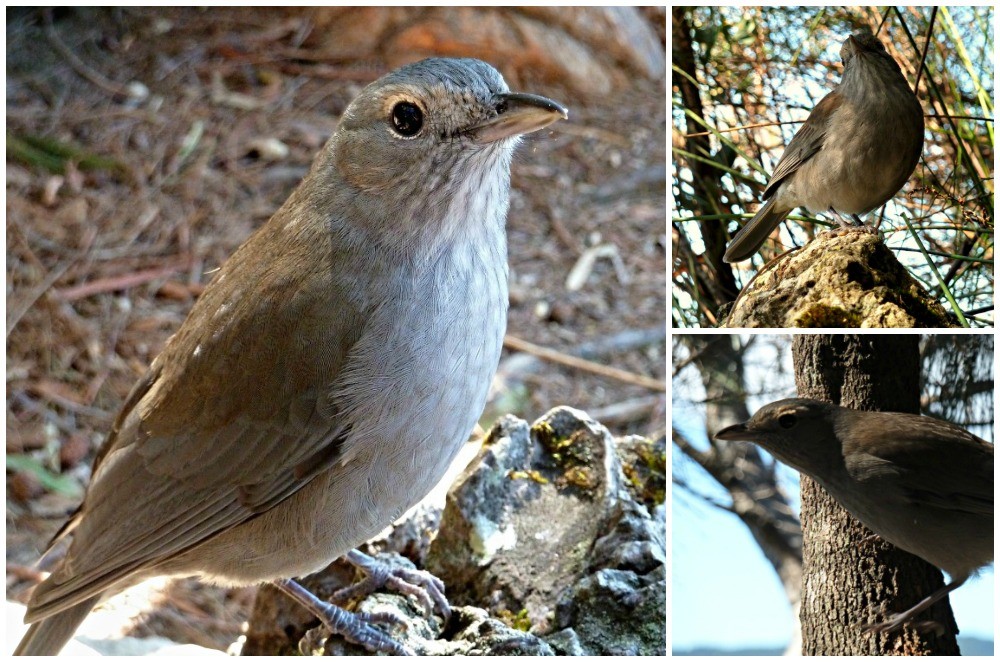 Grey Shrike-Thrush, who took some crumbs from our hand

Brush Box, Blackboys and Corkwoods along the trail

Both in the tree department – with brushbox, grass trees and the amazing bark of the corkwood –
And the wildflowers which included one of my favourites – Banksia.
And chomping away at the decaying fallen wood some magnificent fungi. 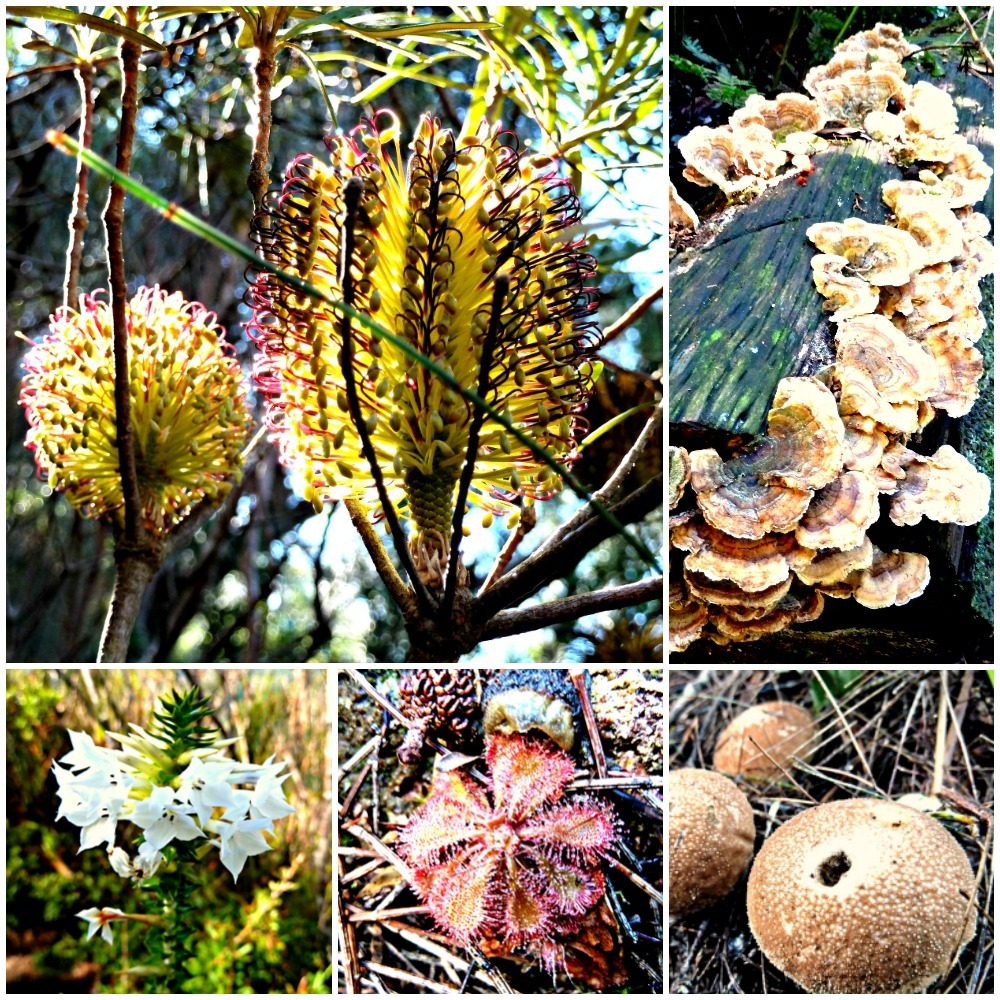 Oh, and did I mention the rainforest wildlife?
Brush turkeys and log runners scratching in the leaf litter, the grey strike thrush who joined us for lunch – and whose cousins flitted from tree to tree at times along the track and also in the she oaks at Surprise Rock.
The whip birds who are small and shy so tricky to see among the foliage, but whose distinctive rising crescendo of a whoooiiiiipppppp sound made by the male – responded immediately by the female if she is nearby with two shrill tweets pierce the air.
Skinks and land mullets are literally under foot –
And little pademelons – a miniature wallaby – nervously skip about in the undergrowth. 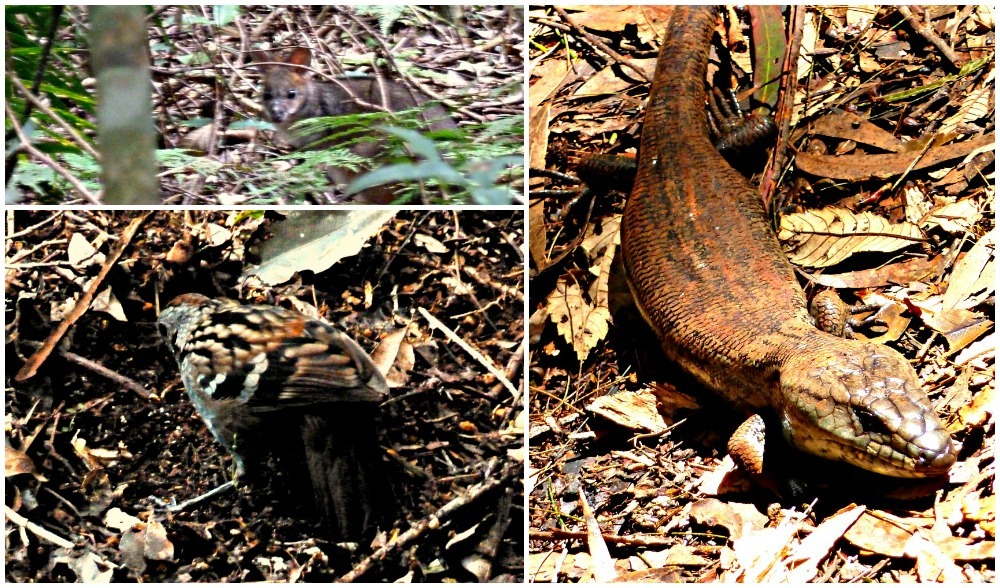 A skink, a little logrunner and a pademelon – before he took flight

We nearly trod on the skink he was lying so still – But the little Australian Logrunner was madly scratching and scrapping in the leafy compost looking for dinner and was quite unperturbed by us walking past – Not so the pademelon who barely stood still long enough to take the photo, before fleeing into the bush

And if the video above is not showing click here to see some Australian rainforest, a log runner and a pademelon.

So if you live in south east Queensland – or you are visiting Brisbane consider a day up in the rainforest –
In the hot summer the higher altitude is a perfect respite from the heat down on the coast –
And in the winter it is perfect for an invigorating walk –
Even if you’ve not long had a hip operation! 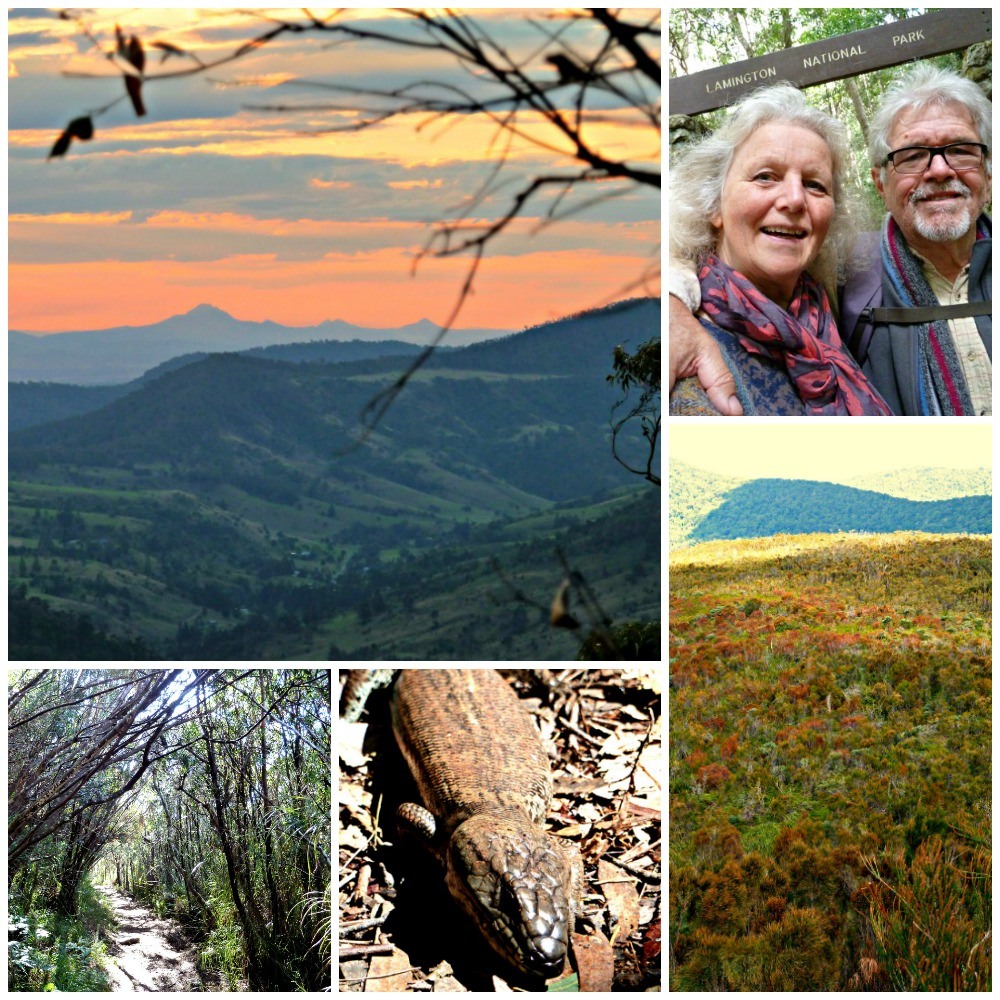 This 13 km (8 mile) Binna Burra walk called Daves Creek Circuit –
took us 4 hours of actual walking –
allowing (as you can see) for lots of photos and video stops!
Plus 45 mins for our picnic lunch break – So for a relaxing outing, allow 5 hours 🙂

The drive down from Brisbane (100km – 1.5hrs), or up from the Gold Coast (45km – 1hr) is along a very easy road with lovely views so can comfortably be achieved in a day.

Tell me – Have you been on a Binna Burra walk?
And if so – which trail(s) have you explored?