“Several squalls during the night & the rolling was awful. I was called according to an arrangement made last night at 3am & I immediately began paying Master Joey out for his game of the night before by rousting him out every quarter hour till 5 when he could not stand it any longer & was obliged to turn out. I saw the sun rise at 4.15 & helped haul up the pilot’s flag as well as the Union Jack of Old England. 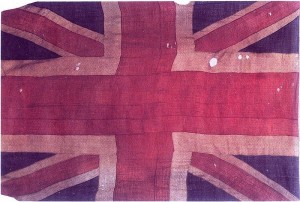 The pilot came on board at 6.10 am & being the first colonial to be seen he was well criticized I was not very much impressed by his appearance, his sandy beard & a squinting eye & a very red nose were enough to denote the boozer but when he opened his mouth to give orders, his voice was like a cracked harmonicon. He also had a dingy hat & coat on of many more acquaintances I should say. Perhaps he is a bad specimen so I will not disgust you by further description. We went as near the coast as was safely possible to signal our name which was then telegraphed up to Melbourne. We were then obliged to stand out to sea again to wait for the tide to serve us which was about 12. We had to wait all this time but I was not sorry for it enabled me to get a good birds eye view of the outside of the coast a sight which I may never see again. Queenscliff on the left with a couple of lighthouses is a beautiful little spot & we are quite taken up by it. On the right of the opening to the bay is Snapper Point & behind that again is Sorrento. We soon past in & were soon nailed by the Board of Health Officers who came on board to look at us & then we moved along at about 8 knots an hour up the Bay. I must tell you that the entrance is about 4 miles wide but only one is navigatable. The pilot brought us some papers on board & from them we learnt the death of the Princess Alice & the failure of the City of Glasgow Bank which must be a great calamity. During the afternoon we passed the homeward mail for which we were too late which I expected we would be.

We passed some beautiful scenery for the last of our trip & at last anchored off Williamstown (One of Melbourne’s harbours) & soon after 6.30pm we were accosted by our old friend Mr Tate who had been waiting for us for 3 hours & through his kindness we got a large bouquet of flowers & a large bag of fresh ripe fruit. Mr W then went on shore with him for the night & we were left once more to ourselves. They have been having very bad weather lately one day 110 degrees in the shade & the next it had changed to below 50. All the men are very tired tonight having been hard at work for 24 hours & I also feel tired too as I have been helping them a good bit today, so we turned in to roost by 9.30 and thus ended our journey to Melbourne on the 93rd day from London & looking all in all it has been most enjoyable & we all feel & look a good bit better for it. If there had only been more to do I should not have minded being out longer but as it is, time hung rather heavy on our hands towards the last & we must all be thankful for arriving safely here ~ “

Extract from A.Whelen’s Australia travel journal aboard the iron clipper “Hesperides” sailing from England to Melbourne in 1878