Prepared our luggage for landing.

Mr Tate & the Guv’nor arrived at 10.30 & soon we had all our cabin stock on board a small sailing yacht & landed at Sandridge Pier at 12 where we were soon spotted by a buggyman, who seemed very sharp fellows & anxious for a job (no growlers mind.) We engaged both one for the luggage & the other for ourselves & then took to the road through Richmond to our little cottage which was already for us thanks to our kind friend Mr Tate.

& with the exception of a few yarns here & there (easily to be detected) you may believe all to be the strict truth & I hope that those kind friends who have read this far may not be tired of it, as it was written solely to show that I had not forgotten any of my old friends in England. The following is an account of our arrival copied from the Melbourne paper ‘The Argos'” 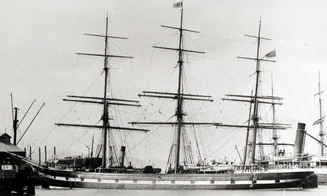 of the modern school and is now only on her fourth voyage her first two ventures having been to Adelaide and the third to India. She is commanded by Captain Upton who was last in the China service in the clipper Pak Wan and of the voyage he reports leaving London on the September 28th and passing Start Point on October 4th Strong southerly winds and south westerly gales with very tempestuous weather beset the ship as far as Cape Finisterrre, whence light airs and variables followed to latitude 25 N. The northeast trades were also light and the equator was not crossed until the 6th November at Longitude 29W. The southeast trades proved light also and Tristan d’Acunha was passed 23rd November two days after in Latitude 42 10”S and Longitude 3 19”W.

The ship was in the vicinity of a huge iceberg. It is a rare circumstance for ice to be met with in such low latitudes and it is to be hoped that no disaster will occur on its presence there.  The meridian of the Cape of Good Hope was crossed 29th November in Latitude 44S and that of Cape Leewin on December 21st.  The easting was also run down in the parallel of 44 with moderate winds chiefly north and a great deal of wet disagreeable weather.

The Hesperides entered Port Philip Head on Saturday morning 90 days from London or 84 from Start Point.” 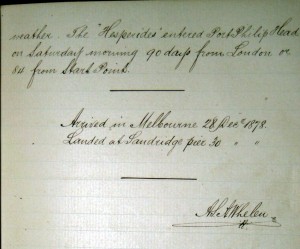 Final extract from A.Whelen’s antique hand written travel journal aboard the iron clipper “Hesperides” when he sailed from England to Melbourne in 1878