For several hours we’d been winding our way up through ancient woodland when we broached the top of a hill and the largest and oldest of Meteora’s monasteries – The Great Meteoron – came into view.
Perched on the top of its sandstone pillar it appeared to float in the sky against a backdrop of snow capped mountains. 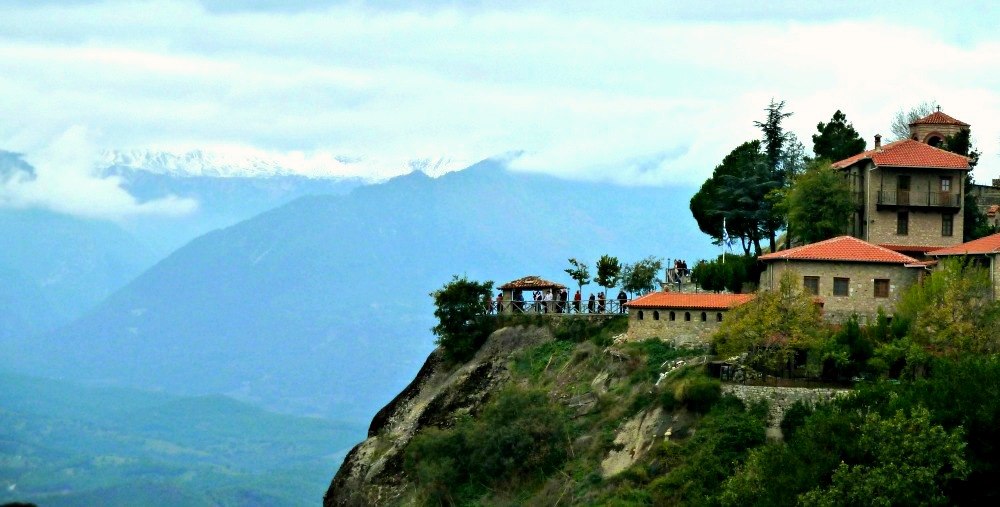 You only have to have seen an image of any one of the monasteries at Meteora in northern central Greece, either perched atop a sandstone pillar… 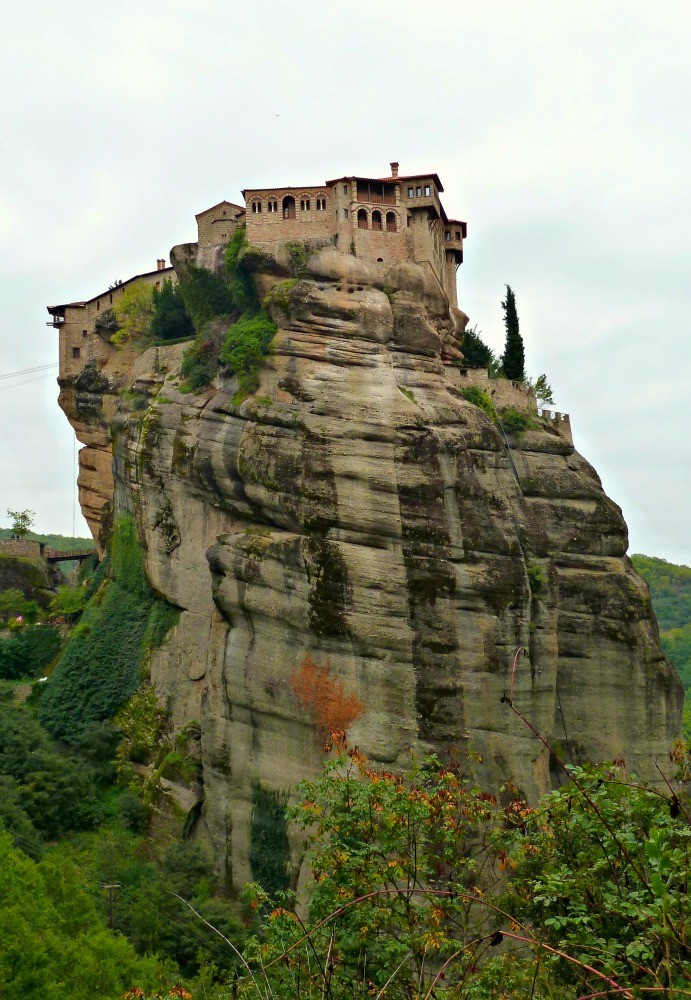 or clinging to the side of a precipice… 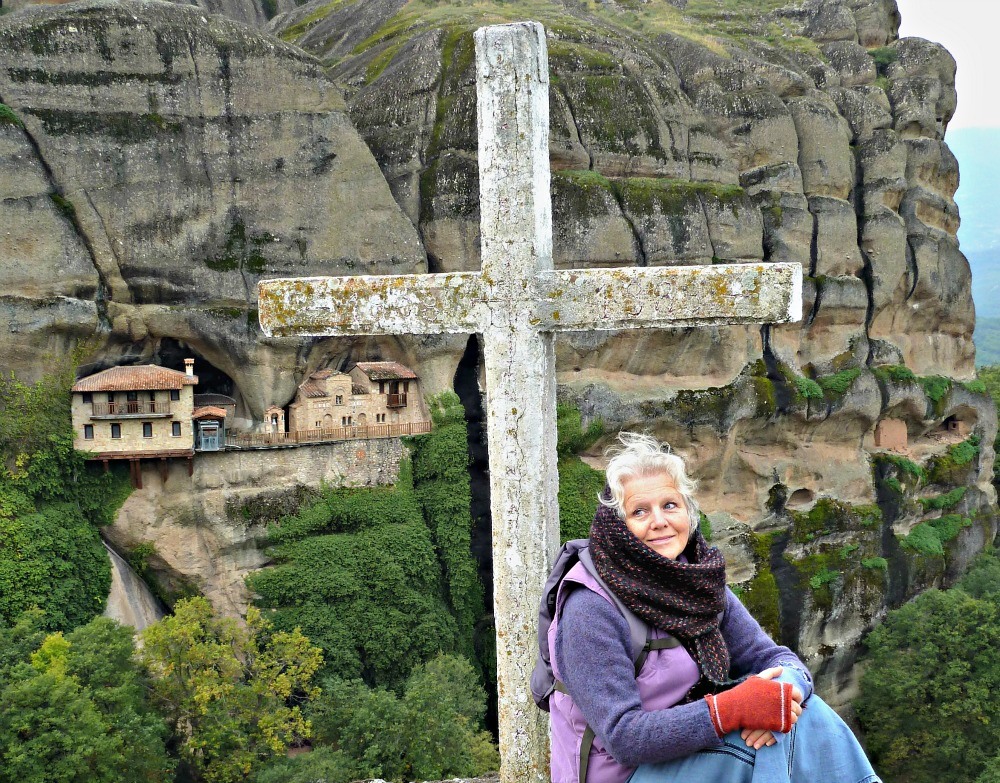 …to be captivated by both the magical landscape and the mystical stories of the monasteries’ creation 700 years ago, when monks hauled building materials up via pulley net systems to build these remarkable religious refuges on top of and in the sides of these unique landforms.

The 8km woodland walk up to a Meteora Monastery

While you can of course drive the circuit that circumnavigates the 6 remaining monasteries that are open to the public (there were 24 originally built in the region), I liked the feeling of making my first approach on foot, giving myself the opportunity to immerse myself in the landscape and experience a sense of connection with those who had walked this way before – a mini pilgrimage of sorts!

The sandstone pillars form a labyrinth of paths in between their bases, so I joined a comfortable 8km walking/hiking tour run by the local Visit Meteora office, whose guide led us through the beautiful wooded landscape along a maze of zigzagging paths otherwise only used by shepherds and their dogs. 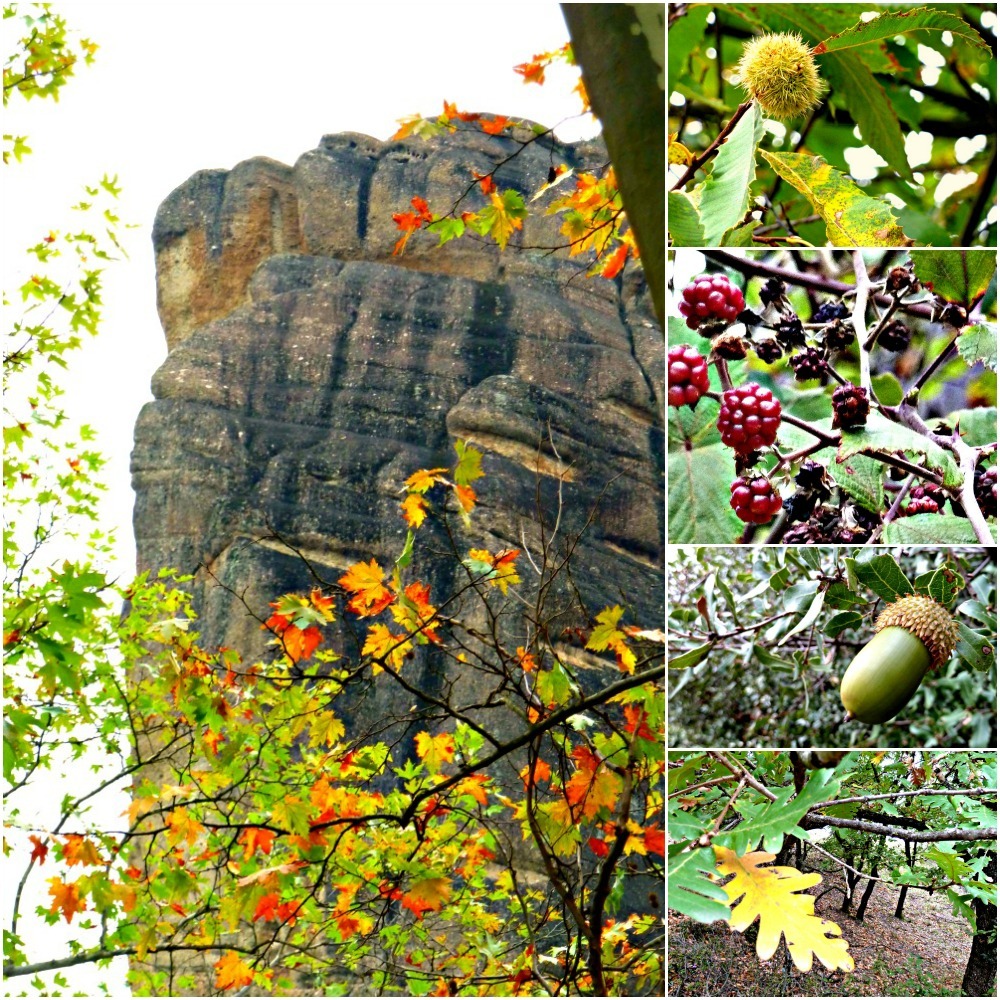 A bus picked us up before 9 taking us out to the other side of the neighbouring village of Kastraki, where we were dropped off beneath a canopy of trees showing their first signs of autumn. 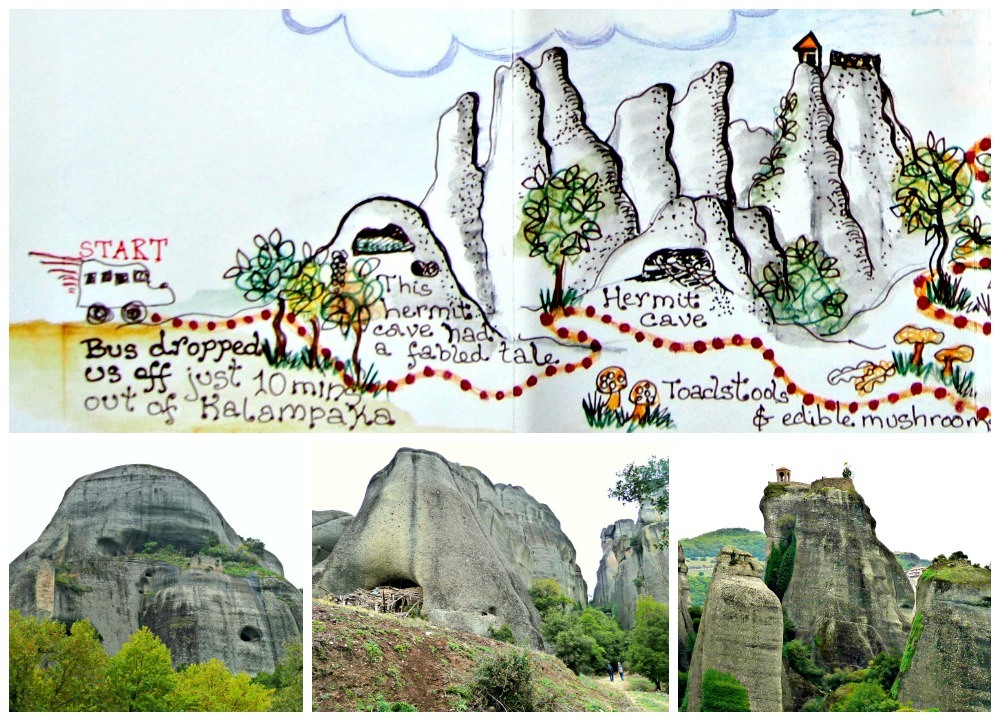 We had barely begun when Lazarus pointed up to a cave in the dome shaped rock above us where the remains of a hermit’s dwelling could be seen – While telling us a fabled tale of its early day occupant (left photo above) I squirmed at the thought of the rock climbing skills required to gain access!

Rounding a few more bends, our path wound around and below another hermit cave, this time ‘boarded’ up with sticks and logs (centre photo), before being lead between Meteora’s characteristic tall steep sided sandstone pillars.

The ground was bursting with toadstools and edible mushrooms, which our guide promptly picked for dinner. 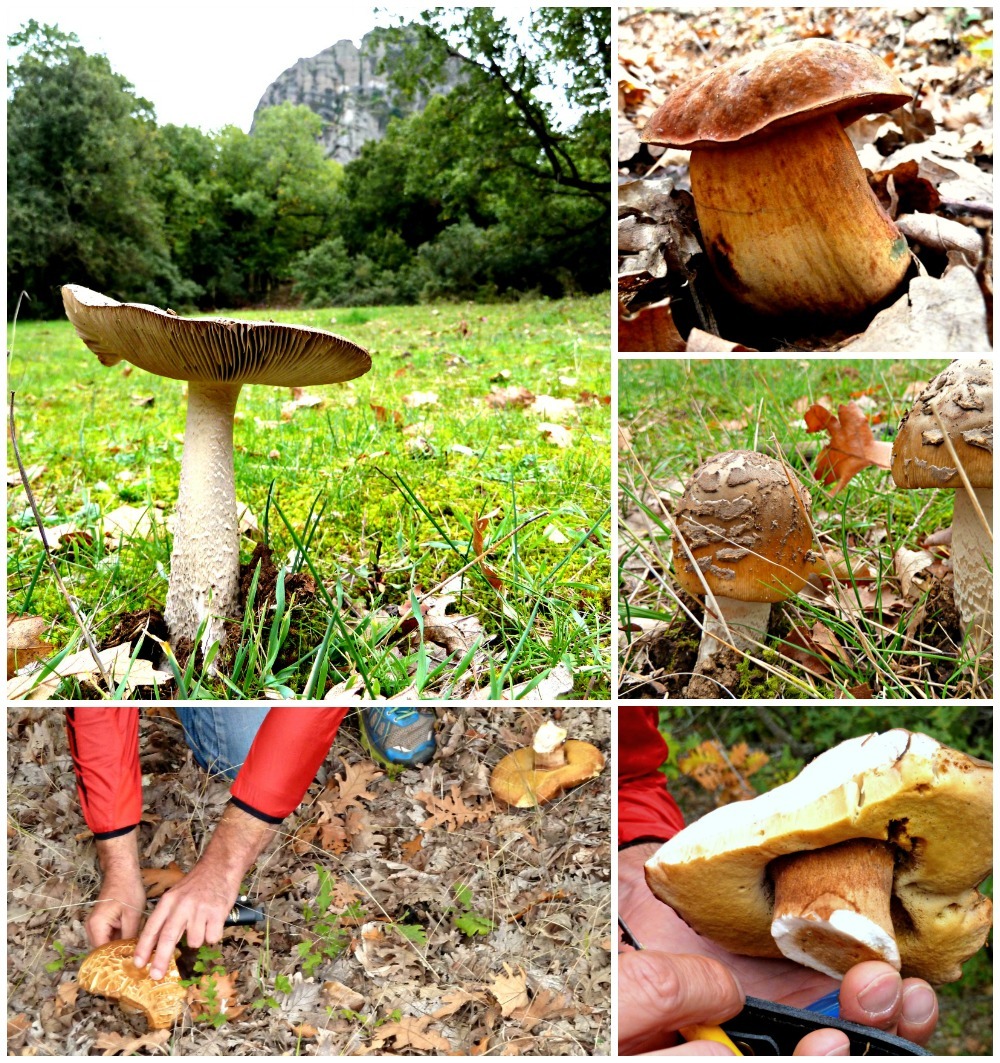 Toadstools are left standing, while the edible mushrooms are gathered for dinner

One of the greatest joys of approaching the more well known monasteries on foot is the hidden gems you find along the way that are only viewable by taking this less travelled walking track – ie they’re tucked away off the main tourist route.

Our first sight of the Monastery of Ypapanti was from below –
Looking up the sheer cliff face we could see the struts supporting the hermitage’s overhang out from the ledge it was perched on (top left photo below).

The path then meandered up and around to reach a plateau, which gave us a wonderful eye-level view directly across the chasm below to the hermitage on the opposite cliff face.
What a sight!

…that contrasted with the soft leafy woodland, which was a biophilac’s delight! 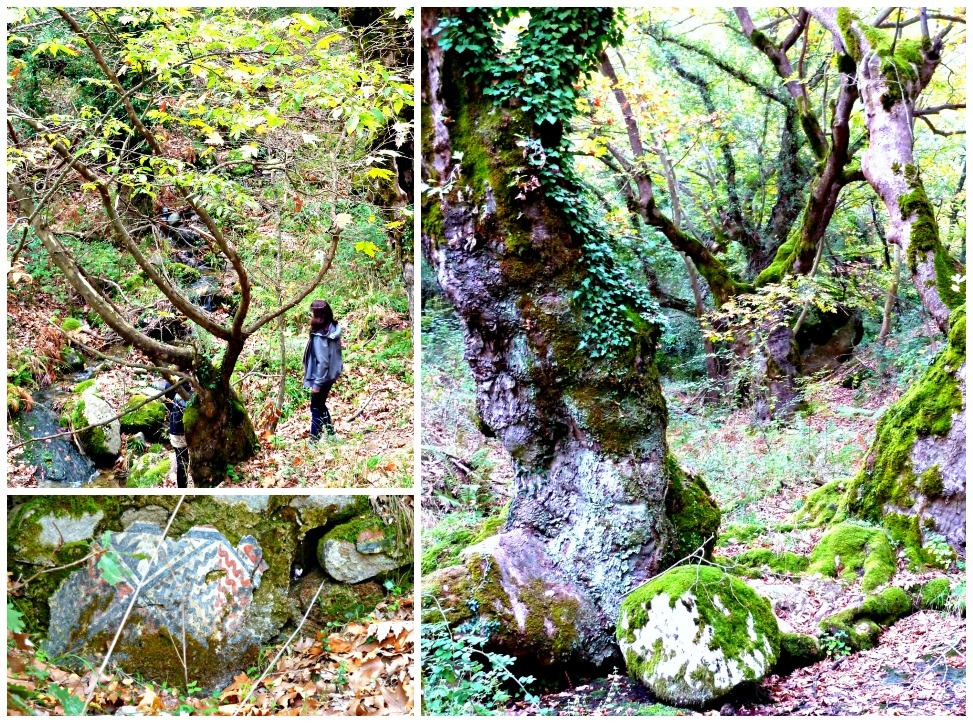 The ancient woodland was a biophiliac’s dream

…with splashes of pink cyclamen and lilac crocuses – the source of saffron – popping out from the leafy forest floor. 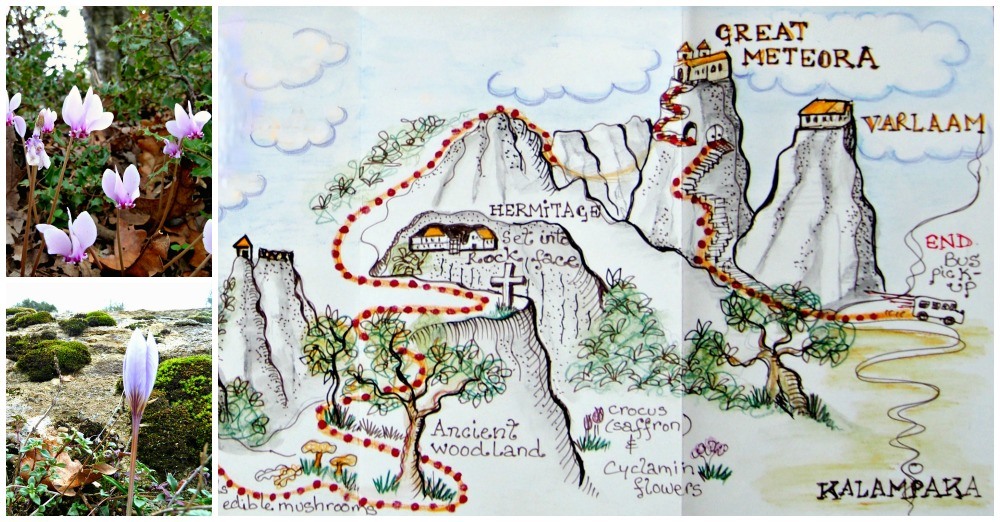 Cyclamen and crocuses popped up on the woodland’s leafy floor 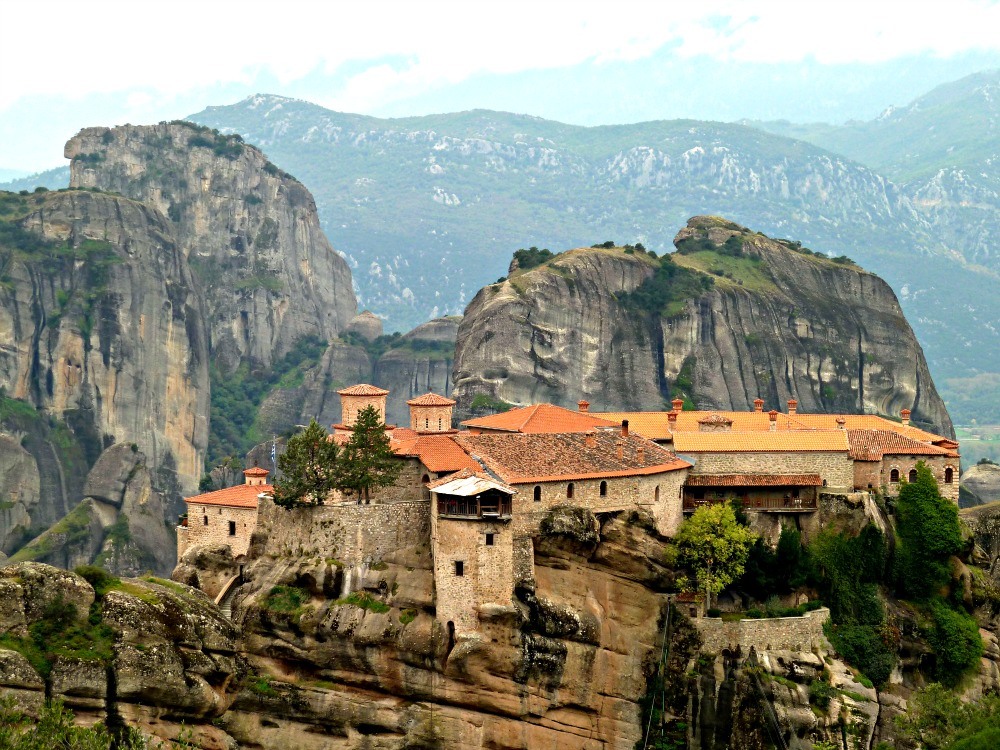 When the final ascent brought us out over the top brow of a hill to reveal below the largest and oldest monastery in the region – The Great Meteron – I felt quietly awe struck. 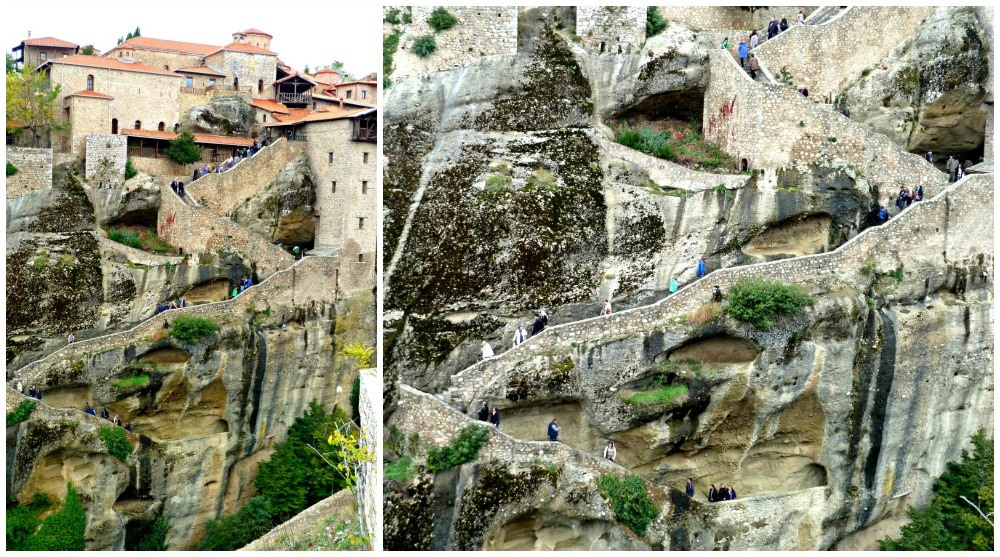 It was not until the 1920’s that stairs were added to the monasteries to allow easier access – So rather than have to winch ourselves up in a net, we went down to a small bridge that precariously crossed the chasm across to its isolated sandstone pillar and clambered up the steps that clung to the cliff face, having gained access through a tunnel hewn out of the rock – (You can see the tunnel entrance in the bottom right of the above photo.) 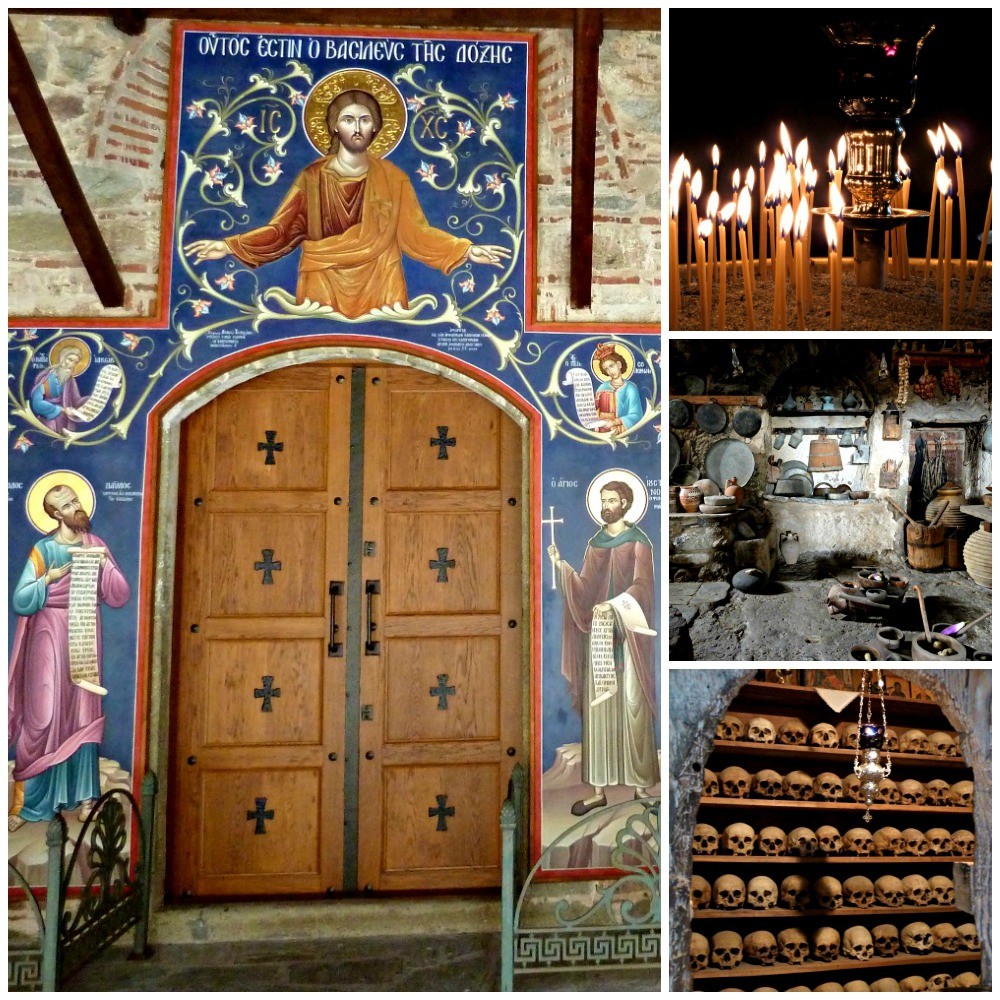 We now joined the masses who had arrived by car and coach –
You can understand why the monks are not open 7 days a week! (The monasteries operate on a rotating schedule to ensure they’re not all closed on the same day, yet giving the monks solitary time to fulfil their life’s work)

Inside was a glimpse into the monks’ sacred world.
The simple fundamentals required to nourish the body with the original ancient kitchen left as it must have been for 100’s of years prior for providing sustenance to the religious occupants; there was exquisite ornate decoration expected in a place of contemplation and worship, candles, and a remarkable room of homage to the monastery’s forebears – a room of skulls. 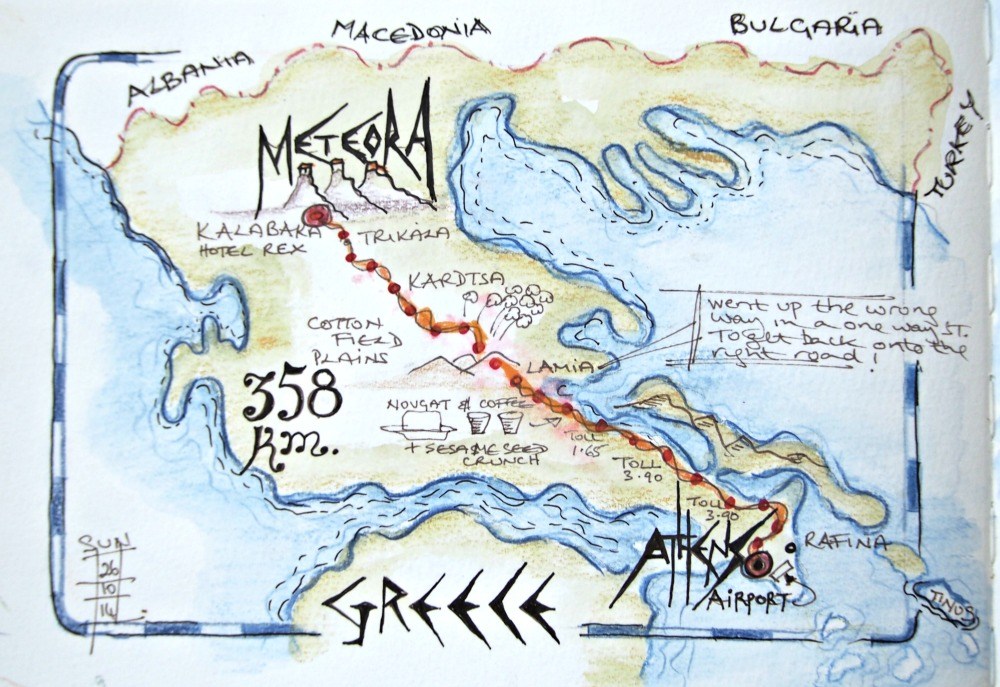 The unique landscape rises above the small township of Kalampaka (pop 22,000)… 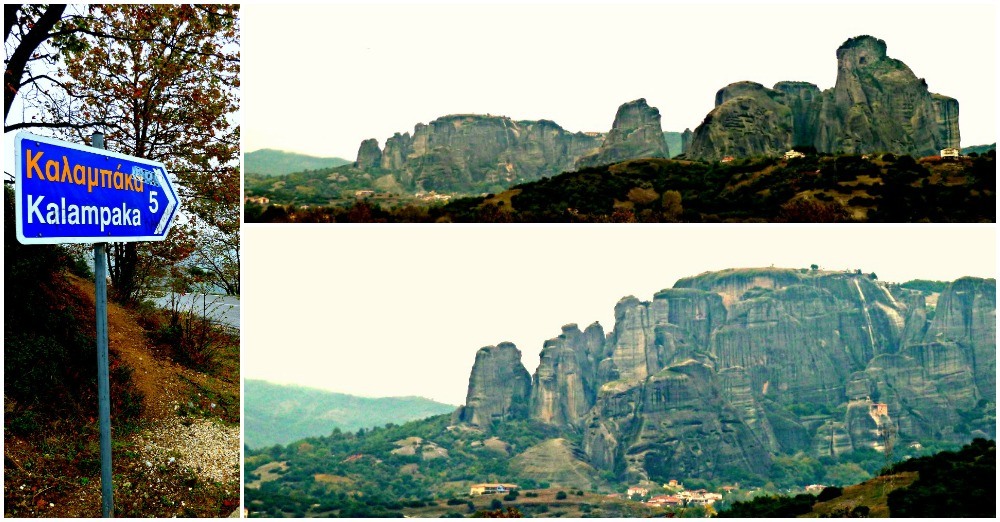 where even the chimney pots atop of the houses in the main street are in the shape of a monastery. 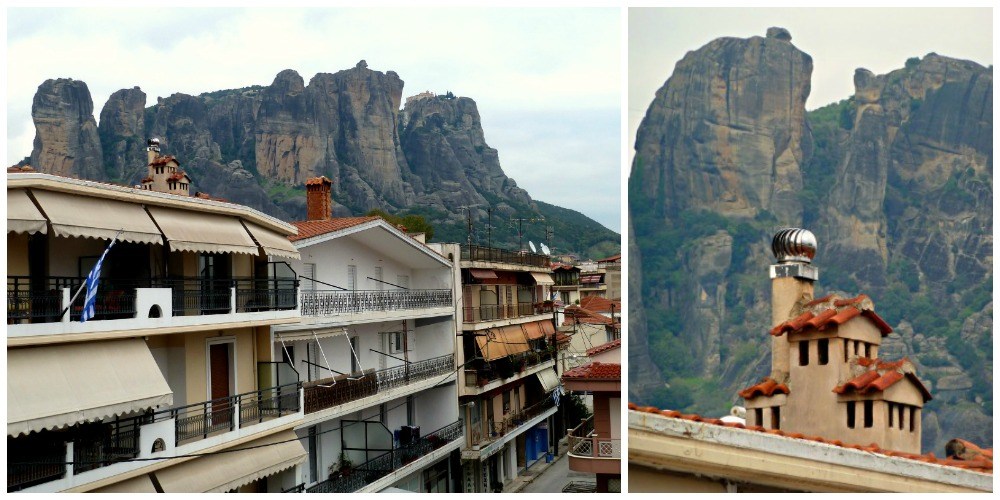 Meteora is an UNESCO site that is listed under 5 of a possible 6 Cultural Criteria, the first of which is that it “represents a masterpiece of human creative genius and cultural significance”.

To appreciate the essence of the region I loved this leisurely walk through the sandstone pillars up to Meteora’s Monasteries in the sky, while seeing hidden hermit caves and hermitages along the way. This hiking tour was with Visit Meteora and cost 35 Euro per person or 60 Euros for a couple –

We were out for 4 or 5 hours, which included time in the Great Meteoron Monastery (3 Euro entry), followed by a gentle walk back down along a stone paved path through the woods to be picked up by the bus, beneath the adjacent Varlaam Monastery.

Have you seen photos of Meteora and been entranced?
(and thought like me – I have to go!)
Or more exciting – have you already been?

Do share your experience, or hopes and dreams in the comments below 🙂