It should have been a simple trip –

I was going to spend a week in Nelson, taking a return flight to Castlegar (mid way between Calgary and Vancouver); then return to Vancouver where the Whistler Shuttle (who guarantee that from Vancouver Airport you’ll be on your way within the hour of landing), would not only take me to Whistler, but would drop me off at my accommodation door.

But… let’s not get ahead of ourselves…

1. In the Beginning – There was an Airplane 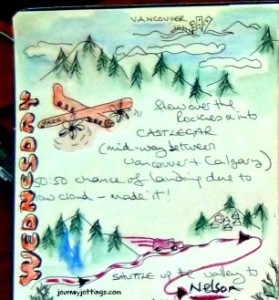 My travel journal entry for my flight to Castlegar

“Calling all passengers on flight AC8248 to Castlegar.

We are now boarding through Gate 4.
However, please be aware there is a 50:50 chance that due to poor visibility we will not be able to land, in which case we will be returning here to Vancouver.”

It’s not often you hear a flight called where the destination is potentially the same as its departure.

But I love a sprinkling of serendipity when travelling so embarked the plane with an air of anticipation. 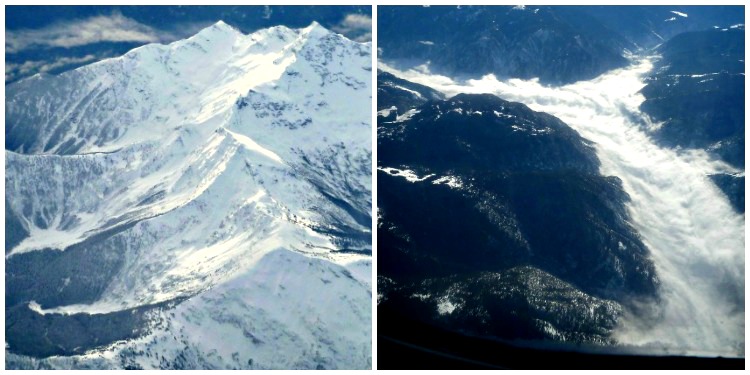 As it developed, the flight was smooth, beautiful, and fruitful.

We floated over snow capped mountains and deep deep valleys where those rogue clouds looked like sticky candy floss.

Our destination – Castlegar – is considered to have one of the most challenging approaches of any North American commercial airport with ‘no possibility of a straight-in approach’ due to the surrounding mountains.
So it was a relief, as we started our approach that the candy floss clouds dissolved and our final descent down the narrow valley (where you could virtually touch the passing tree tops on either side) brought us in so as to turn on cue to miss the mountain range that lay perpendicularly ahead of us.

2. In the Middle – There was a Greyhound

After a superb week in Nelson (blog posts of fat tire biking and snow-shoeing at Whitewater to follow) I was ready to leave Castlegar, which I had discovered during my stay was colloquially referred to as ‘CANCELgar’.
I arrived at the small airport at 9am to the announcement that not only was my flight cancelled, but flights from the previous two days had also been cancelled due to poor visibility; while there was another flight due at 1pm, with the previous two days’ record, I had to ask myself – was it really that promising?

The alternative(s?) were limited –
There was a single daily Greyhound bus that (miraculously?) left in less than an hour but would take 12 hours, compared to the flip of a coin possibility that the lunchtime plane, scheduled to take just an hour may (or may not) jet in.

I vied for the “certainty” of the Greyhound – at least that way (so I thought)…  I’d be at my destination by nightfall.

A cab was called, and I raced to the Greyhound office to purchase my one-way ticket.

Moments later the bus from Calgary pulled in, bags were loaded into its undercarriage and I clambered aboard eyeing either side of the aisle for a place to sit -The bus was packed except at the very back (by the toilet) there was a girl spread across two seats dozing –
“Excuse me… Sorry.. but…” 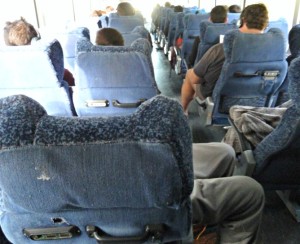 And two hours into the 12-hour trip to Vancouver it lived up to its appearance.

Making our way up a mountainous pass the bus ground to a halt on a steep single lane incline.

After a few intermittent bunny hop efforts of cranking her up, and letting her cool down, we reached a safer spot to pull off the Highway and assess the situation – Which was that we weren’t going to be going anywhere soon – And… we were out of cell phone range.

Broken down on the side of the Highway

The driver donned his regulation fluoro yellow safety vest and disembarked to flag down a vehicle to take our carrier pigeon message back to the previous base where, a short while before, standing in the queue for the only loo at the small office, the driver had hassled us to abandon our mission with:
“All aboard – We’ll be at the next stop in no time”

A while later a reconnaissance party from the last base appeared through the fog to do a first hand reconnoiter. 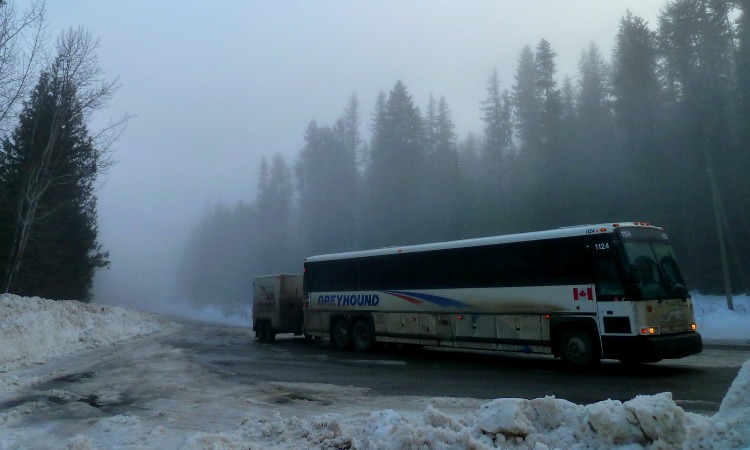 The driver repeated the message given to our carrier pigeon that
“We’ve broken down and require a replacement coach to take the stranded passengers to the next stop.”

“Oh.”
The reconnaissance team got back into their cosy 4WD and returned to base with the update.

It was beginning to feel like an episode from “Lost”

A group of unconnected people suddenly finding themselves connected by a common event.

A man who related how his wife was on her death bed so was desperate to get to her side, managed to muster another three passengers (prepared to fork out the additional $125 each to share a taxi) and so passed ‘Go’ and moved on to the next stop. 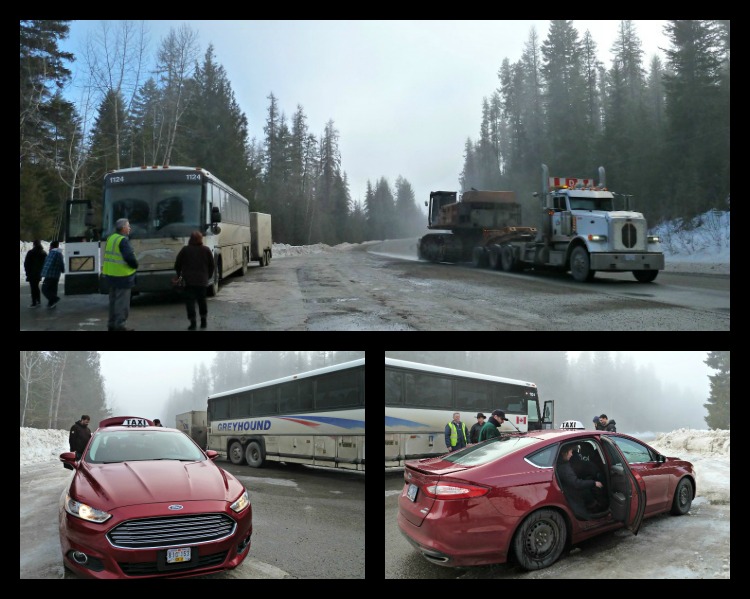 A loud mouth from the middle section of the bus who repeatedly shouted profanities at the driver for the inconvenience and refused to shut it despite repeated requests from fellow passengers that there were children on board was cajoled out by (it evolved) an ex SAS man – He enticed the ‘sh*t head’ to go with him to hitch a lift, escorting the disturbance out of the bus and up the highway, where when a car stopped, he said:
“You take it – I’ll follow in the next one”.

He returned to the bus alone.

A mother with two children, rugged them up against the cold and got off for some playtime in the snow.

A couple of young women asked the driver how long we’d be here?
On the assumption the replacement bus would come from a base further up the track (after the reconnaissance team relayed the request from the base further down the track) he estimated “at least a few hours”.
They descended the steps and headed off into the woodland to explore the snowy forest footpaths. 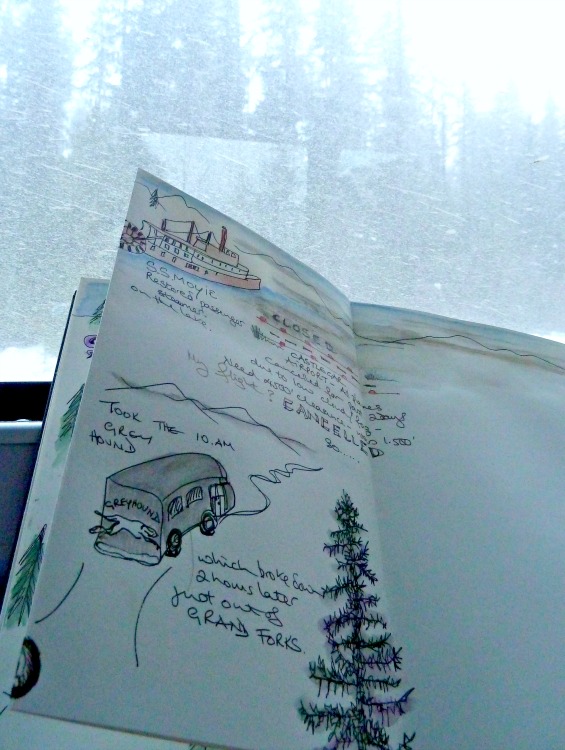 I updated my travel journal.

An unplanned exploration of Canadian forests

Then, rather than stay cooped up, I too took to the woods following the snowy footprints of other destitute passengers who had gone before.
It was otherwise a silent, uninhabited landscape.
It felt a little ominous.
There was a low lying murky mist – the sticky candy floss clouds seen from a different perspective – wafting through the dark conifers blocking the sun from fully penetrating.
But as the path rose higher, I emerged out into a sparkling fresh white landscape a world away from the gloomy reality sealed in below. 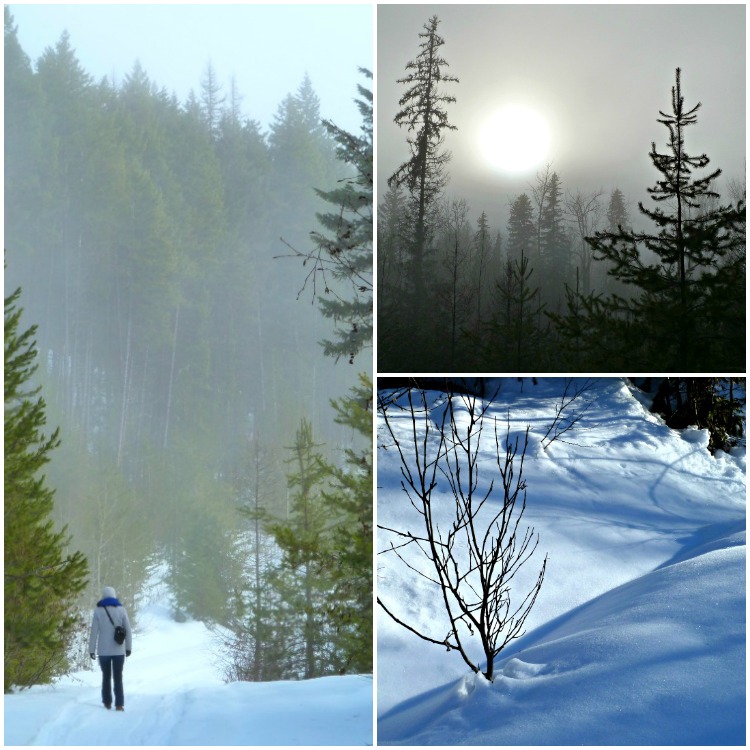 Three hours later, the summoned replacement vehicle appeared over the horizon, and after five hours marooned on the side of the highway, the journey continued on to Kelowna.

Where, as a consolation for the endured inconvenience Greyhound offered us all a plate of the greasiest noodles flecked with khaki coloured tinned peas and ochre coloured corn kernels, with a bottle of water. 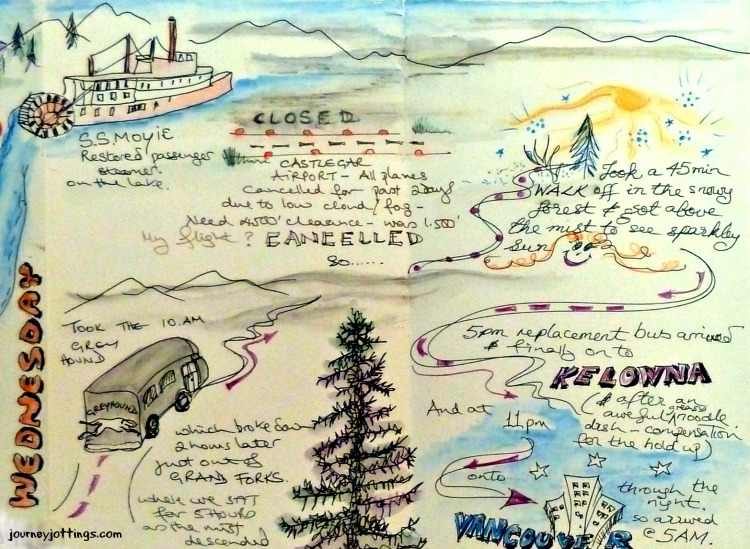 At 10 pm – the time we were supposed to be arriving at our destination, we were instead boarding our ‘connecting’ bus to take us through the night to Vancouver.

But half an hour hour into this segment there was…

Yet another hold up –

A man who had decided to use the toilet as his seat, with the door open, was reported to the driver –
The driver stopped, and came back to inspect the problem.
The man agreed to move himself further up the bus, but then took to sitting in the middle of the aisle.

The driver donned his regulation fluoro yellow safety vest and called the Police.
We waited (and waited) for them to respond.

Still protesting his innocence, the Police cordially escorted the perpetrator off the bus. 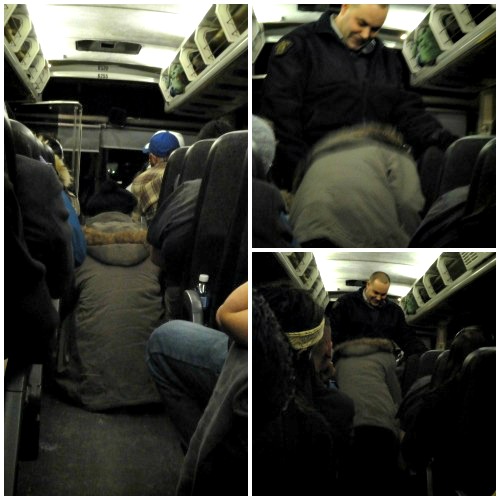 The motor once again droned.
Fleeting glimpses of lit up settlements flashed past.
I whiled away the wee hours of the night with occasional head nodding and much leg twitching as my feet ferreted around under the seat in front trying to find an illusive horizontal position that all diurnal creatures crave when forced to sit bolt upright past midnight.

3. In the End – There was a Shining Shuttle Bus

It was still dark when we finally pulled into the Greyhound station at Vancouver. 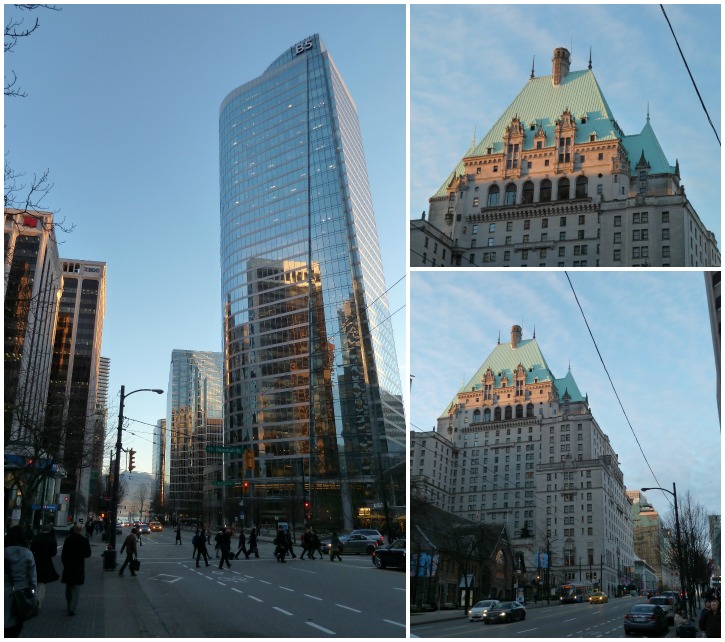 As the dawn began to break I hailed a yellow taxi cab and headed down town to a newly appointed shuttle-bus pick up point (as I wasn’t going to be at the airport as I’d said). In the hotel foyer, a Starbucks was serving aromatic cups of coffee to the early morning city slickers; some rushing to their office, some holding breakfast meetings and some donned in tight fitting running gear with white ear plugs draped around their necks grabbing a caffeine boost as part of their latest health kick.

I sunk into a plush low level sofa and relished the comfort of a delicious drink and a palatable plate of food.

My Whistler Shuttle Bus pulled in on cue – appearing like a knight in shining armour the driver rescued me from my 24 hour ordeal. 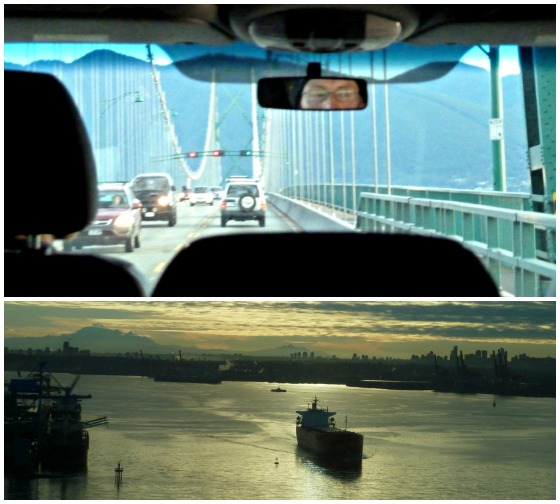 Skipping the early morning rush hour traffic we were out and over the bridge in a flash and heading up the Sea to Sky Highway 99.

Sweeping up the Sound past superb scenery

The scenery of Howe Sound was positively dreamy – With tantalizing views across the water to distant snowy mountain tops – my destination.

Photos of views taken from the shuttle bus (while on the move!)

We glided into Whistler and I was taken to my door… 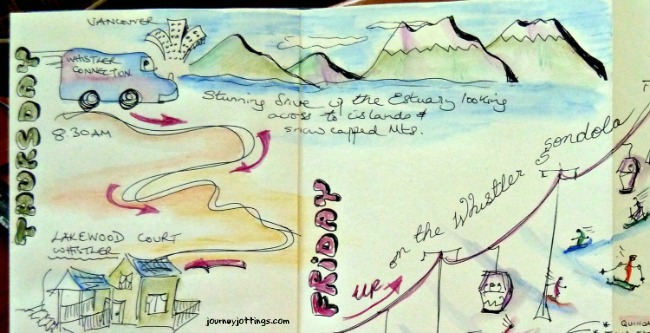 The Whistler Shuttle took me to my door

Where… I collapsed into a soft cosy bed for a catch-up nap, ready for my wonderful week in Whistler 🙂

Click here, if you want to know What to do in Whistler if you Don’t Ski

Have you had a simple journey turn into a convoluted adventure?

I’d love to hear about it in the comments below!

43 thoughts on “A Travelling Tale… or, How I Finally Got to Whistler”