“All the buckets had been taken except for one” John recounted.

“‘Lucky Last’ I called it” and his eyes crinkled up and his cheeks reddened as he chuckled to himself.

Having paid the princely sum of $8 for a bucket of wash, (many places here in the gemfields of central outback Queensland sell pre-dug wash to the visitors) he’d been shown the technique of fossicking with a sieve and then dunking in a willoughby, which jiggles the heavy stones to the bottom and when he turned his sieve over – there, among the gravel was…

And he roared with laughter 😉 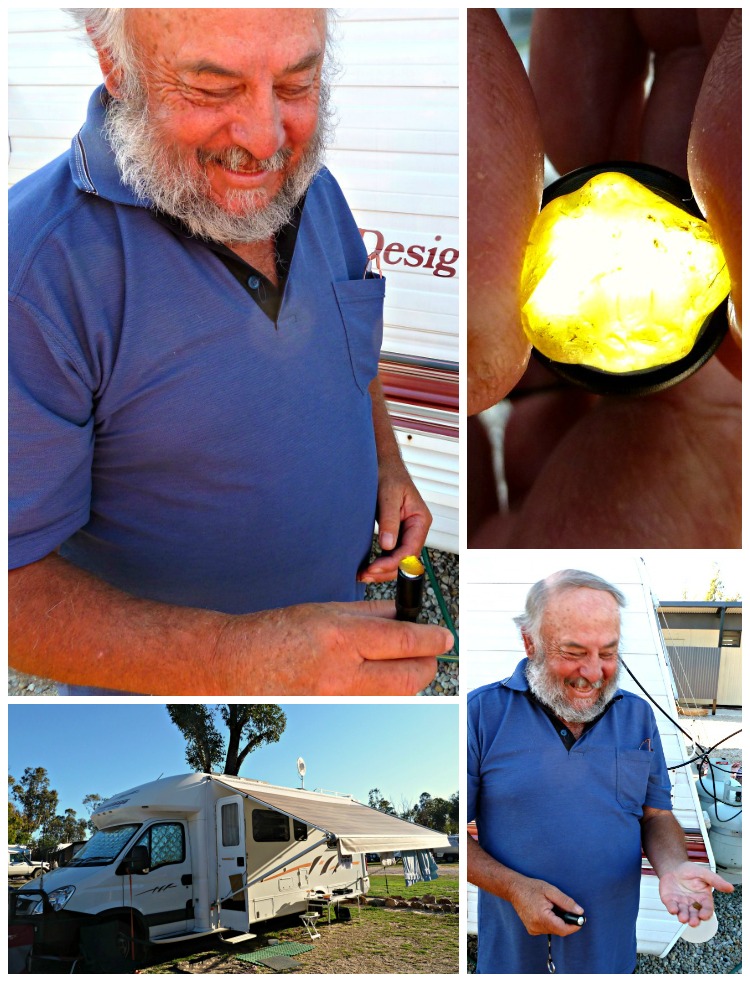 Made all the more amazing by the fact this wasn’t some distant hand-me-down story of hearsay.
I was standing in Anakie Caravan Park, in the Gemfields of central Queensland, not only hearing it from the horse’s mouth, but I was seeing the proof of the pudding with my very own eyes right on the site where he’d bought his fabled bucket of wash just a few days prior, and where he was currently camping on his RV trip in outback Australia. 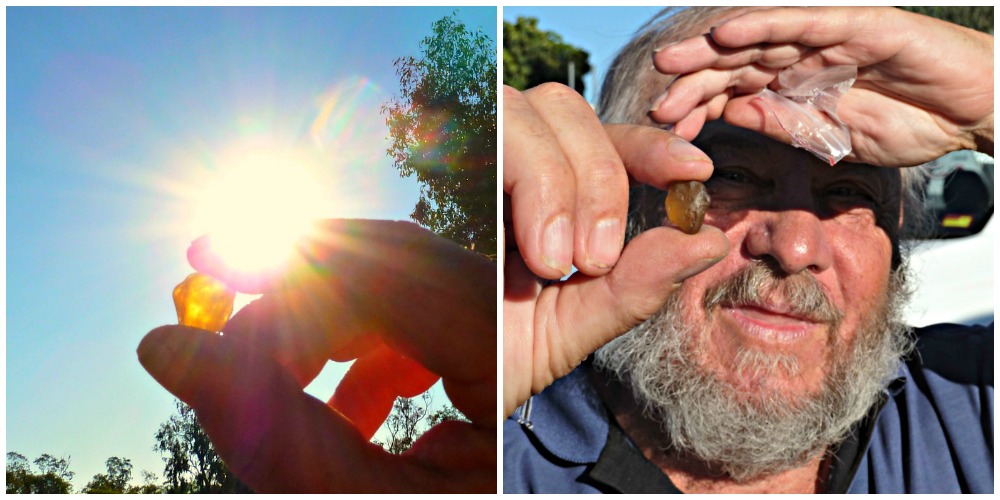 Enthused by his luck, and with a glint of gem-fever in my eyes, I had to give it a go!

Not having a clue what buckets of wash were, where to find them or what to do with them I teamed up with the Little House of Gems in Rubyvale and headed bush with Michael to show me and our group the ropes.

[Editor’s Note: Little House of Gems has sadly, for us wannabe fossickers, closed to pursue other ventures – Ask at the Emerald Visitor Centre for tag-a-long fossicking tours]

He made it look as clear as clear as he explained how the story started at Mt Hoy – a big volcano that erupted millions of years ago (there are over 70 volcanic plugs not 50km apart in this region) and it was from these extensive lava flows of basalt that formed the nucleolus for the sapphires and zircons that are now to be found in a layer of wash below the earth’s surface, but above the granite. 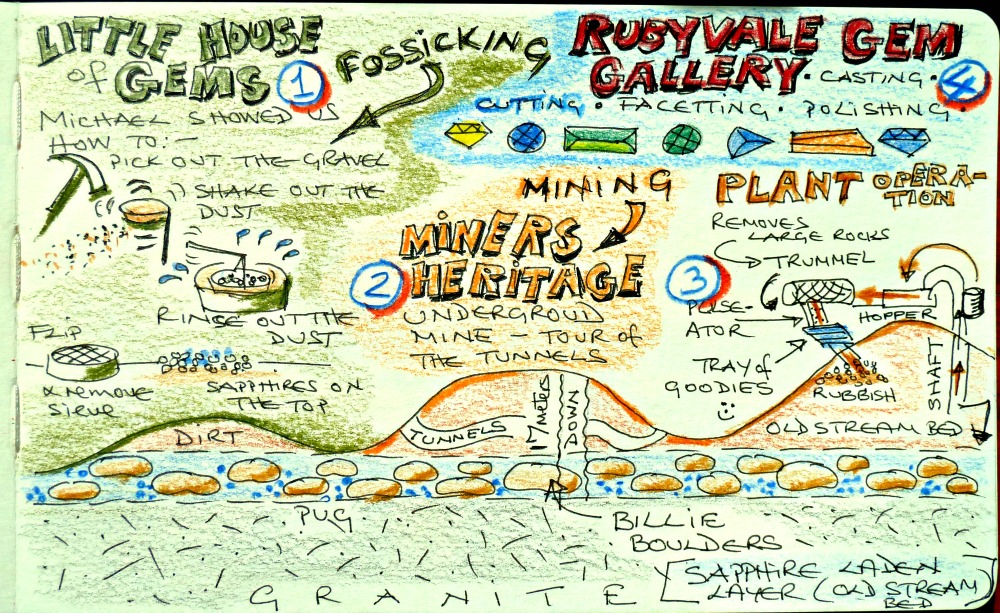 Summary of my day in the Gemfields where I Fossicked for sapphires, visited an underground mine at Miners Heritage, watched a commercial plant in operation and finally saw a jeweller cut some gems.

With picks, and buckets and sieves we set to work extracting (as technically as our beginners eye would allow) the whitish talc like wash from (as instructed) below the surface dirt, but above the redder looking pug clay.

We then sieved it to remove the dust, jiggled it in the willoughby – a very simple but nifty device that bounces the remaining wash up and down in water allowing the heavier rocks to wiggle their way to the bottom so when we swung and flipped our sieves out upside-down on the table – technically – our ‘finds’ would be near the top… or maybe around the edges where as the sieve is removed they could potentially roll down the sides… or maybe just in case you hadn’t quite jiggled it sufficiently and it was lurking just below the surface and you fear you may have missed it entirely, you pick and sift your way through the entire heap…
And if you’re lucky…

You find a little treasure 🙂 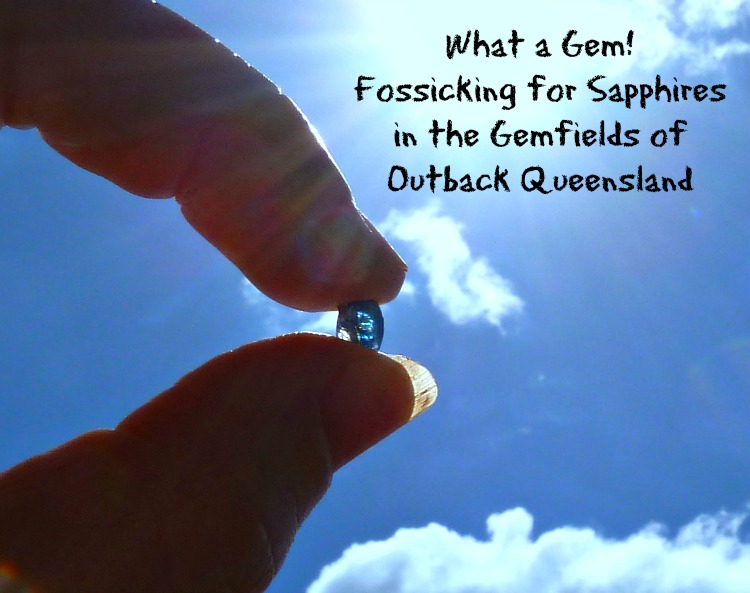 My little find in outback Queensland

Not quite as impressive as John’s yellow sapphire –
But it was my very own little gem find from my day out in the sapphire fields of Central Queensland –
I’ve been told it’s big enough to cut a single stud earring from it, so it looks as though I’ll have to go back to find another, so I can make a pair 😉

Have you ever tried gem fossicking?
How was your luck… and if good, do you care to tell us exactly where?

30 thoughts on “What a Gem! The Fun of Fossicking”