This post is part of my series How to Travel Journal Like a Mapmaker…
Here, I illustrate my hand drawn sheets of pictogram symbols.

Seeing the World in Symbols

Pictograms are the type of symbol we see frequently on our travels and without even thinking what their meaning is, we comprehend them no matter what language we speak. Along with the International Code of Signage, pictograms (or pictographs) achieve another layer of meaning –
Pictograms inserted on a triangular shaped sign warns us that there’s a hazard ahead; whereas circular signs are instructional, and tell us something is prohibited. 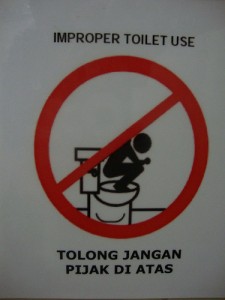 Your regular topographic map is awash with symbols –

Some symbols require a key to decode (such as sub-classes of churches with or without a spire) but where space permits, pictograms are preferred for their ease of comprehension.

And from the story-mappers point of view – pictograms are magnificent as being minimalistically simple… they require minimalistic artistic skills to produce!

Pictogram Symbols for the Landscape 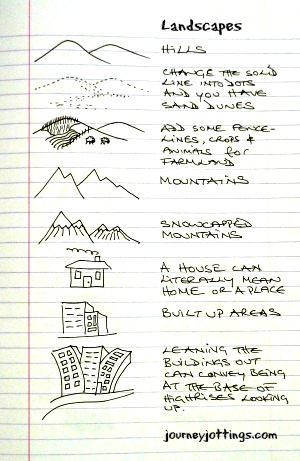 Add a few hills to your story-map and you’re immediately in a landscape!

Add a fence and a couple of fluffy clouds on 4 pins and you have sheep in the fields.

Pointy hills with a zigzag line below the summits adds a snow line.

The house symbol can specifically mean someone’s house – But often I use it as a symbol for a place I’ve come from, or am going to.

Urban landscapes are easy rectangles and with a few lines or squares across their front, they appear to have windows. 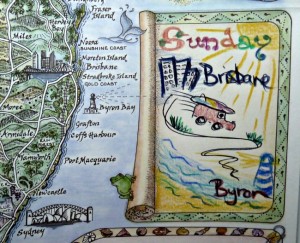 The bottom example gives more a sense of being right in the heart of a city as by curving the sides of the buildings out the impression is you’re standing right at their base looking up!

I used that technique in this little story map of going from Brisbane to Byron. 😉

Putting the pictogram principals illustrated above into practice –

Below is a portion of a story-map from central Australia showing a desert landscape – I added the notation about the ‘wind whistles through the desert oaks’ as anyone who’s heard that sound whistling through their spiny branches would close their eyes and sigh remembering the wondrous feeling of being out in the desert, miles from anywhere 🙂

Pictogram Symbols to Represent Vegetation on Your Story-Map 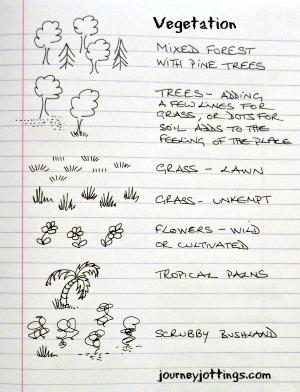 Intersperse them with spiky stick trees if it’s a woodland that also has some coniferous pines.

Add some horizontal dots if it’s stoney and gravelly.

It’s sometime quite surprising how evocative a few squiggles can be to convey scrubby vegetation. Particularly when you don’t really know or remember exactly how it goes… other than it being scrubby and scribbley!

The trick to creating symbols that work visually is to observe and notate the definitive characteristic of the object, or in this case the vegetation you wish to represent –

For example – Pandanus tree leaves grow upwards and then flop over into a fold so their profile is quite spiky.
That would be their defining feature –
By focusing the illustration on that feature means the symbol becomes unmistakable. 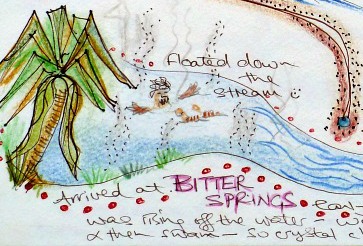 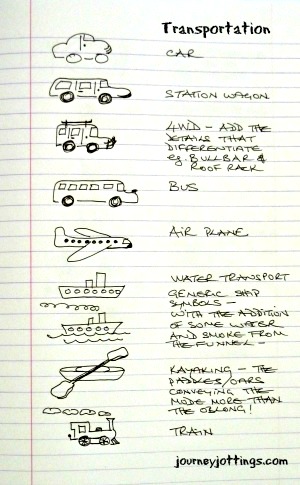 No matter what make or model of car I travel in I always use this little symbolic rendition to mean I went by road.

Elongate it and it’s a station wagon/estate

For a 4WD – add a roof rack and a bull bar as these (to me) are a 4WD’s definitive features.

Bus or coach – For some reason those old yellow American school buses always come to mind.
What type comes to mind when you think of a bus?
That’s the sort you should be pictogramming!

When it comes to canoeing – What one feature screams kayaking?
To me it’s paddles –
So by exaggerating that feature (over the otherwise nondescript rectangular/oval I’ve plonked underneath it) will totally tell the story of what we did. 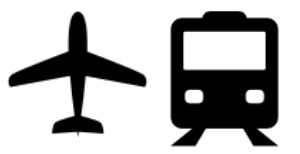 You may now be surprised how often you notice and see pictogram symbols in your everyday world!

Below, are two little sections from a story-map I created –
On the left was us whooshing up the Stuart Highway in the Northern Territory of Australia (notice the speed lines coming off the top of the back of the station-wagon roof – longer at the top, shorter at the bottom).
Huge road trains with two and three trailers rolling along behind the cab would come hurtling down towards us –
The image below right is my impression of this apparition – There never felt as though there was the time to count the trailers as they flashed past so I simply left the back of the truck fading off into the distance –

You don’t have to draw things exactly as they are to convey what you want to say! 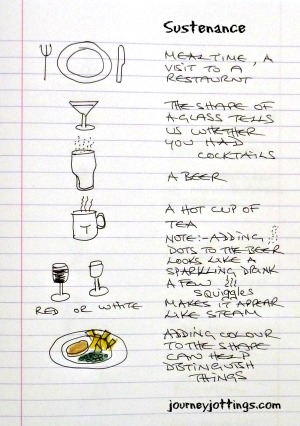 Show the shape of the glass and you’ll be telling the tale of not just that you had a drink, but that you had a cocktail, or a beer, or a glass of wine – even down to whether it was red or white.

Adding sparkles in the form of dotted lines above a tall glass insinuates bubbles from a beer, or wiggly lines infers steam rising off a hot cup of tea or coffee.

I haven’t talked of colour yet – but as can be seen from the plate at the bottom of my pictogram sheet, adding a little brown, yellow and green turns undistinguishable shapes into a pie with chips and peas!

My little symbolic gesture of coffee and cake, which is an excerpt from a story map when we were at Uluru brings back the memory of the moment far more strongly than the photos I insisted upon taking before devouring it – because guess where those photos are?
Yes, they’re still languishing in the dark of an SD card 🙁

Stick Figures to Convey People on your Story-Map

Pictograms are extensively used each year at the Olympic games since at such a multi-lingual event it’s critical that everyone can understand and interpret what events are being held where –
And they’re a great example of just what can be conveyed by a simple stick man! 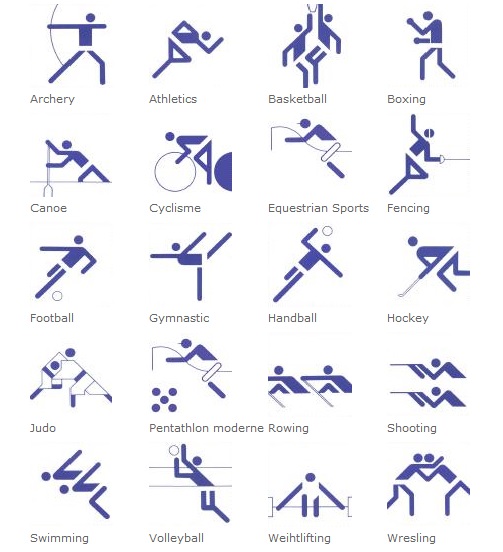 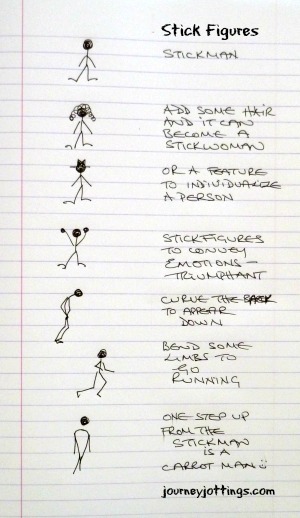 While my stickmen aren’t quite as stylish as the Munich 1972 Olympic Games pictograms above, by adding a little expression of some long curly locks or an accoutrement, such as a hat, can make stick figures quite personable!

Curving the back like a Lowry figure can insinuate a person is feeling a bit down.

Bend a few limbs and you have your person running

Or if you want a bit more body, start off by drawing a carrot – then add the arms, legs and a blob for the head.

It illustrates a few of the points I’ve been talking about here – Such as:
Adding a mop of curly hair to differentiate me from my husband, who you’ll notice I scribbled a little black beard on –
By putting flute shaped glasses at the end of our arms (look, no hands!), with the addition of a few dots above for sparkles clarifies the celebrational drink –
The tent is another example of accommodation – The guide ropes and the pegs being exaggerated as their differentiating feature – Plus a few dots on the ground makes you visualize some good camping dirt. 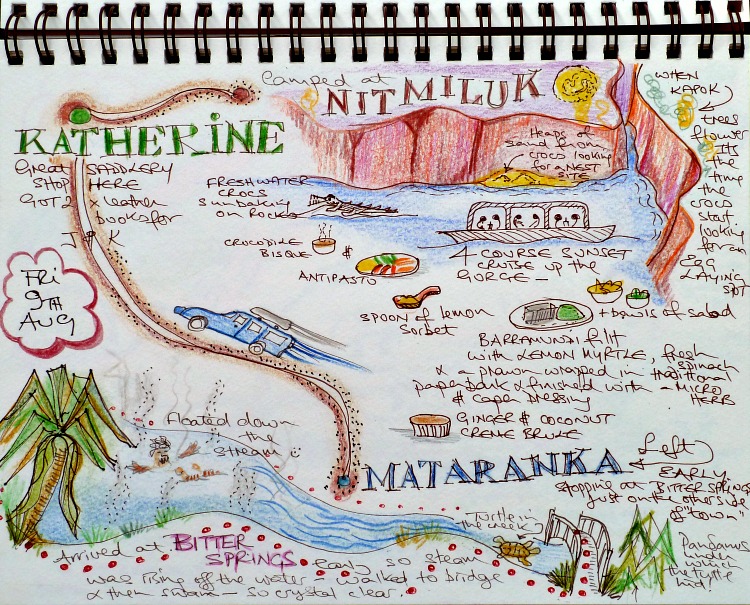 On the boat that took us up the gorge, the main feature I was aware of were the big open windows so I wanted my symbol to highlight that aspect, so I drew the boat side on (also of course, that seemed the easiest!) and I then put stick men heads in each window with relaxed, laid back, curved bodies.
I particularly wanted to savour the menu so drew a little symbol for each course.
Note: They are not artistic renditions – They are very simplistic pictorial symbols that will jog my memory when I see them and bring the whole experience back to life.

Did you realize how much we rely on pictograms
for even simple tasks like finding the loo?
Or getting to the airport?
Or even attending the right sport at the Olympic Games?

In the next post we’ll pull all these elements – lines, arrows and symbols – together and talk about Layout –
Where exactly do you start on the page?
The Laid Back Travel Journal Layout 🙂

Want to be sure you don’t miss it?
Pop your email in the box below and I’ll give you a cooeee when it’s published

26 thoughts on “Do You Realize How Often You Already Use Pictogram Symbols?”