The view was tantalizing. 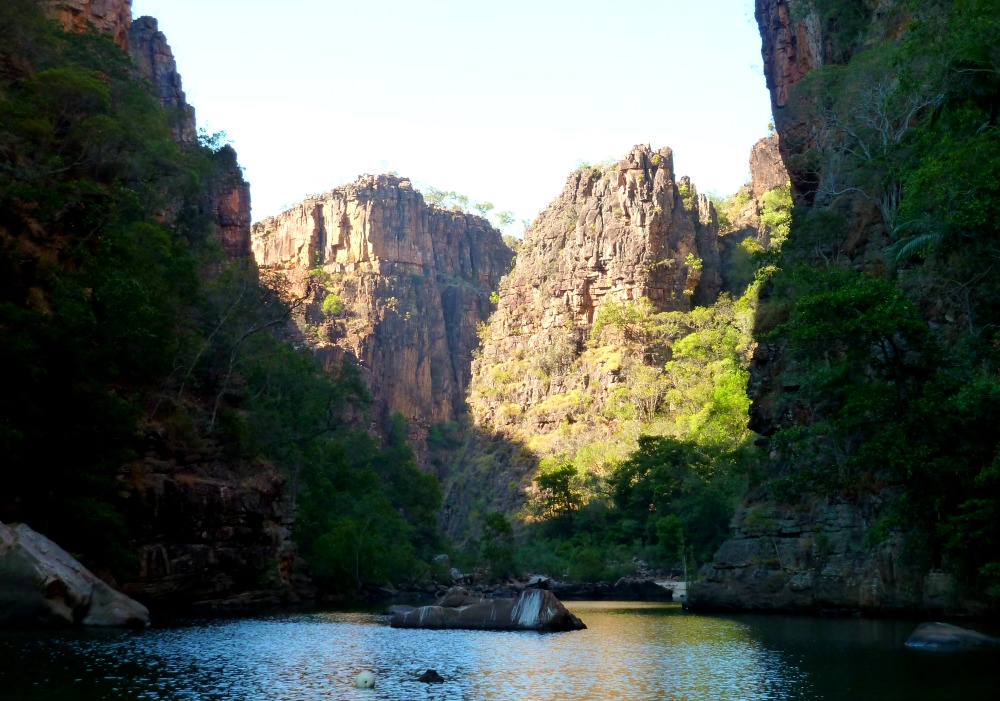 We were finally in a shuttle boat gliding gently up the creek between two sheer walls of stone country that rose either side to touch the sky, framing the distant escarpment and our destination Gungkurdul (Twin Falls). 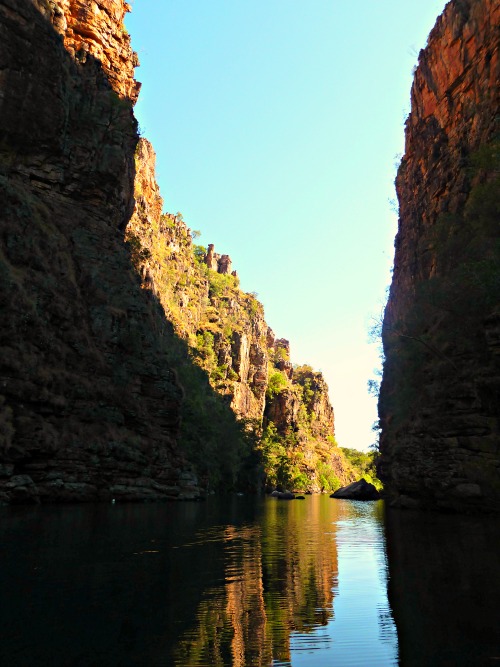 Peering down this narrow chasm was like looking into a lost world – ancient and untouched. 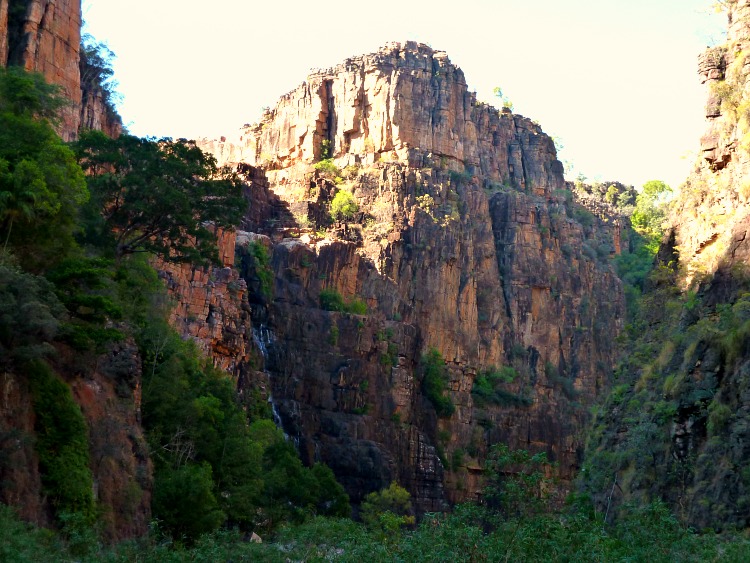 To get here, to the entrance into Twin Falls, we’d driven: 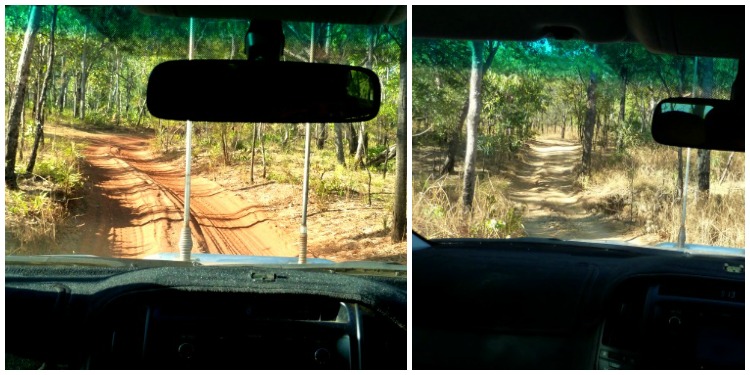 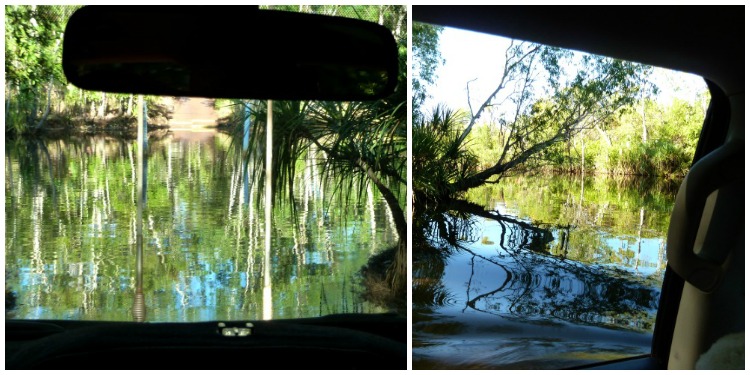 Approaching Jim Jim Creek in a 4WD, and looking out of the vehicle window at the wash 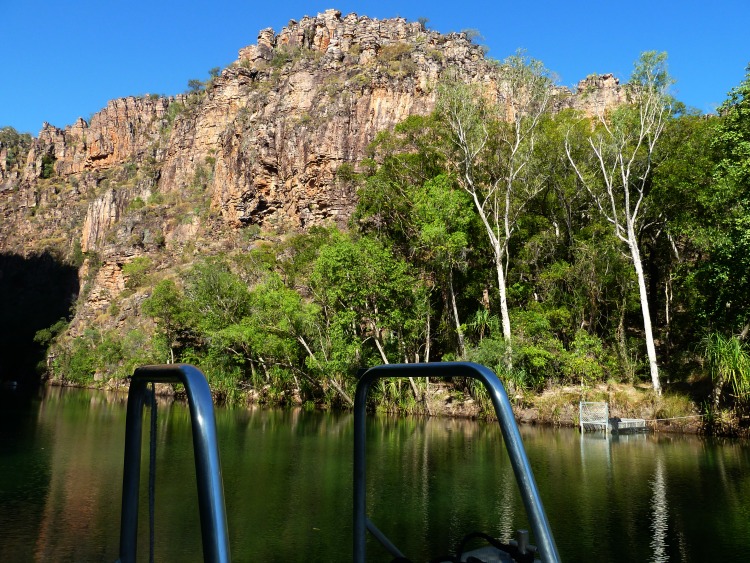 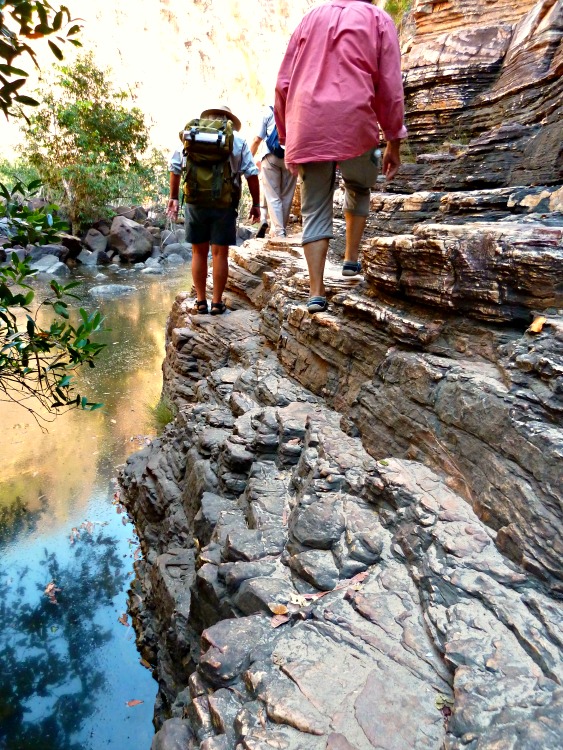 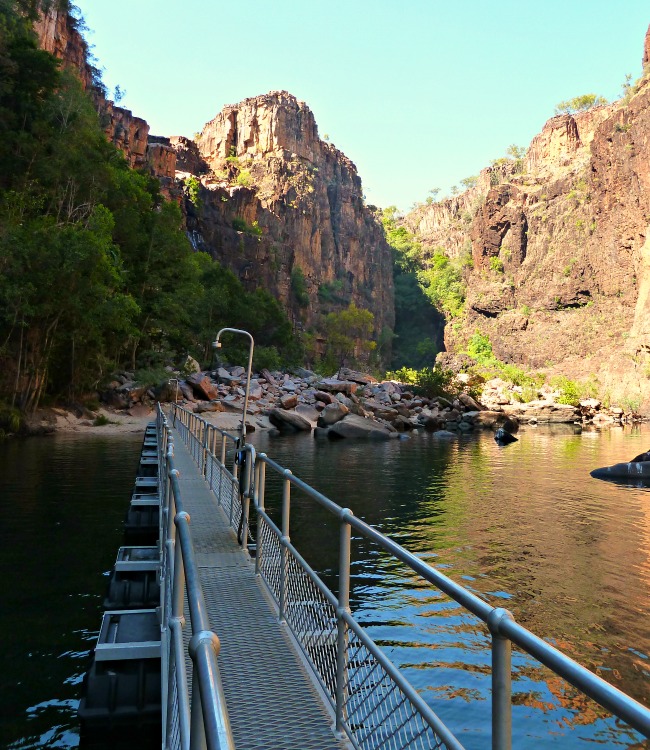 Despite our intrusion, there’s an untamed wildness here –

And for 6 months of the year it is totally wild –
Between December and May torrents of wet season flood waters cascade down from the plateau above, leaving Twin Falls free to rumbustiously wash away man’s marks left from the dry season invasion. 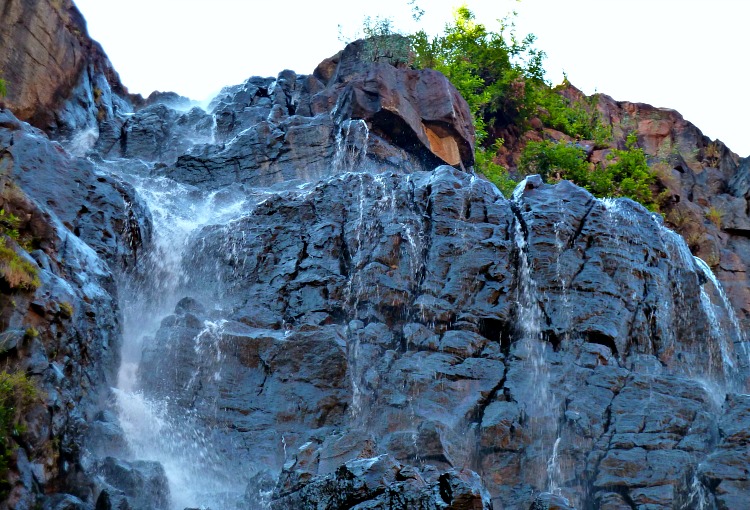 Preparing Twin Falls for our Visit by the Kakadu Park Rangers

Parks and Wildlife do an amazing pre-season job each year to prepare this area of the World Heritage Kakadu National Park so visitors to the region who yearn to see this treasure can gain access.

The behind the scenes work done by the Kakadu Rangers has been documented in a one year project to film and record a year in the life of Kakadu broadcast on ABC (Australian Broadcasting Corporation).

I can highly recommend watching, if you get the opportunity – Here is a trailer.

The Park Rangers have only weeks after the waters start to recede at the end of the wet season, and the creeks lower sufficiently to gain access, to get their critical work underway checking for salt water crocodiles that infiltrate the area via the waterlogged floodplains. 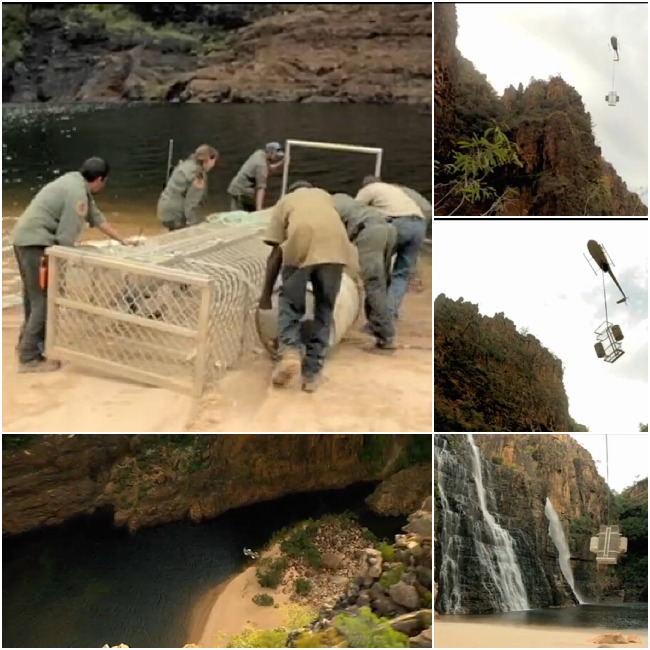 Crocodile traps are flown in by helicopter and baited, while ground and aerial surveys are carried out to hunt down and remove any crocodiles in the near vicinity that could cause a threat to tourists.

However, as a precaution there’s still no swimming allowed at Twin Falls, and when we were there the crocodile trap was still in place at the bottom of the beach. 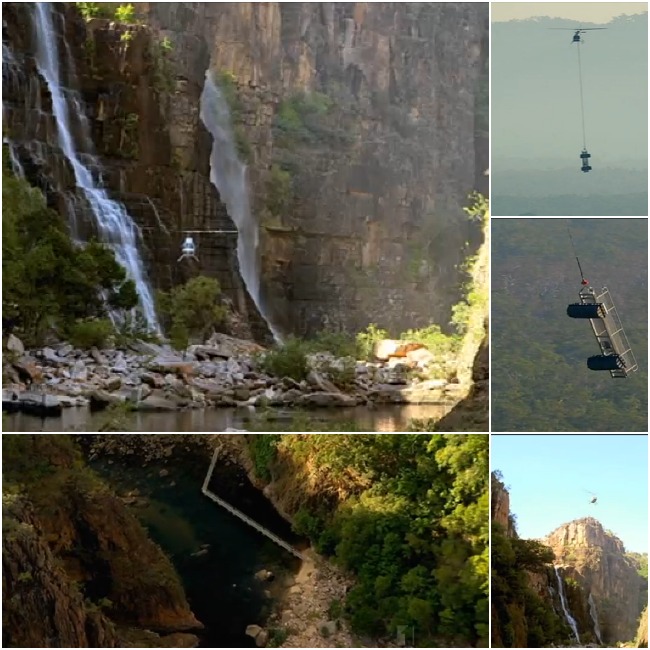 The metal boardwalks are then flown in by helicopter, in sections, before any visitors can get up to the Falls . (They’re dismantled and flown back out at the end of the season to avoid damage by the rampaging river that flows down the gorge during the wet season) 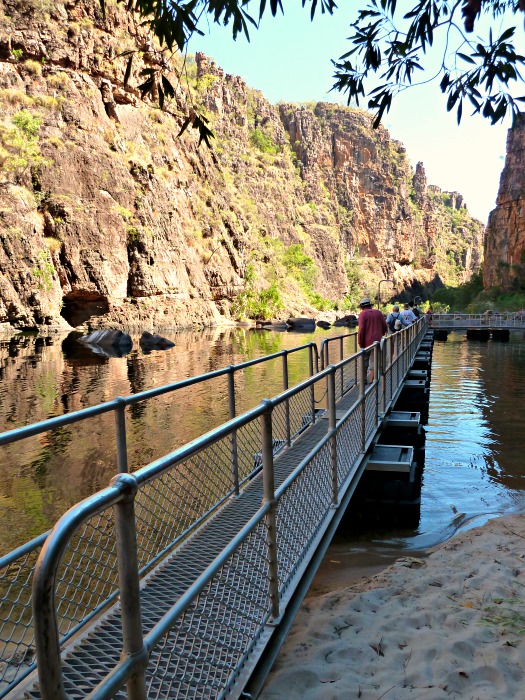 The floating pontoon to Twin Falls is the final stepping stone to the white sandy beach that leads up to the Falls at the very end of the gorge.

A monumental sandstone escarpment encircles the waterhole that lies at the base of the falls, flanked by a white sandy beach – 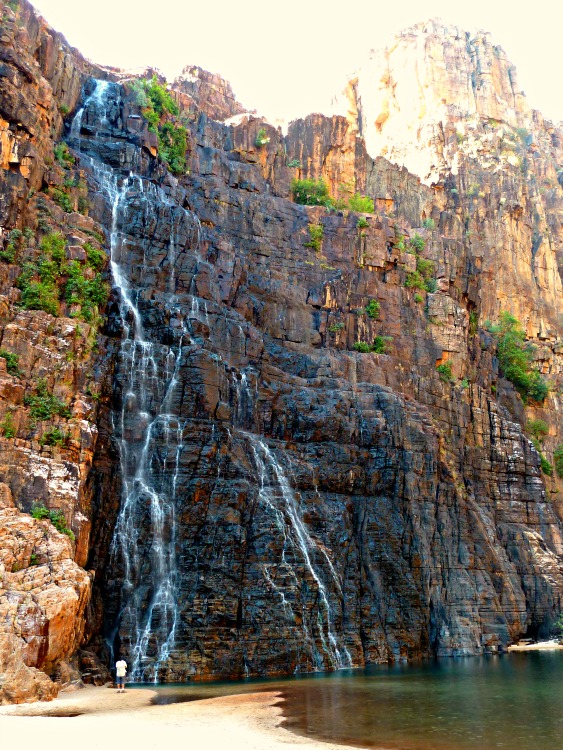 Photo taken on our wonderful trip to Twin Falls

It’s an ancient landscape that has remained unchanged for eons – other than the one metre height that’s eroded away every 100,000 years!

But, the forces of nature dictates when the season will end as the temperature and humidity rises and the cloud formations build up ready to deluge the country once again during the Wet Season November – May. 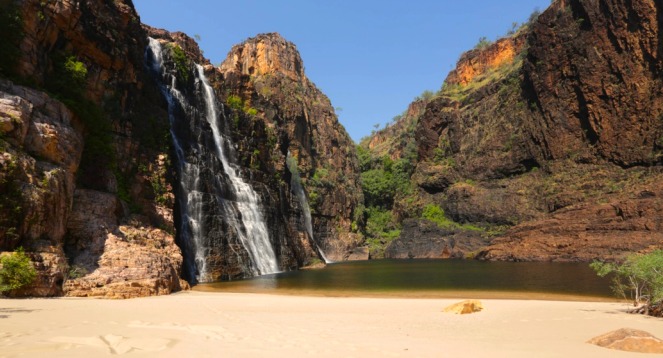 Twin Falls – A piece of paradise

The power of the Northern Territory is its mystery –
Unlike most places that can be trampled over on demand, the Territory keeps much of its magic under wraps, only allowing glimpses of her many tucked away precious places that we’re privy to enjoy.

Twin Falls – A piece of paradise. 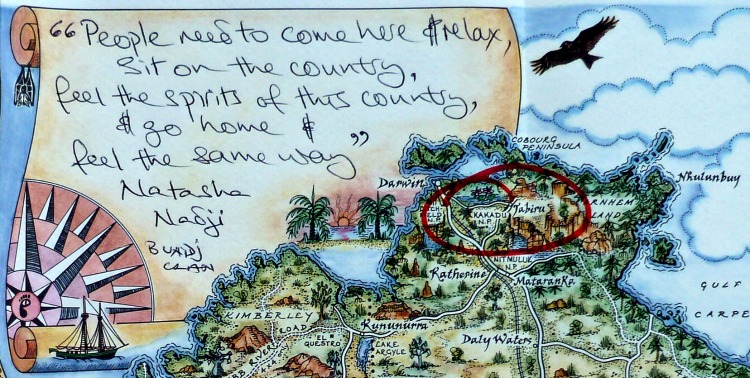 “People need to come here and relax,
sit on the country,
feel the spirits of this country,
and go home and feel the same way.”