One of our fabulous readers Red Nomad Oz, travels Australia and records her discoveries on her entertaining website Amazing Australian Adventures.

So where did Red get to in 2012… and did she manage to spot any Journal Maps on her travels? Read on to find out! 🙂 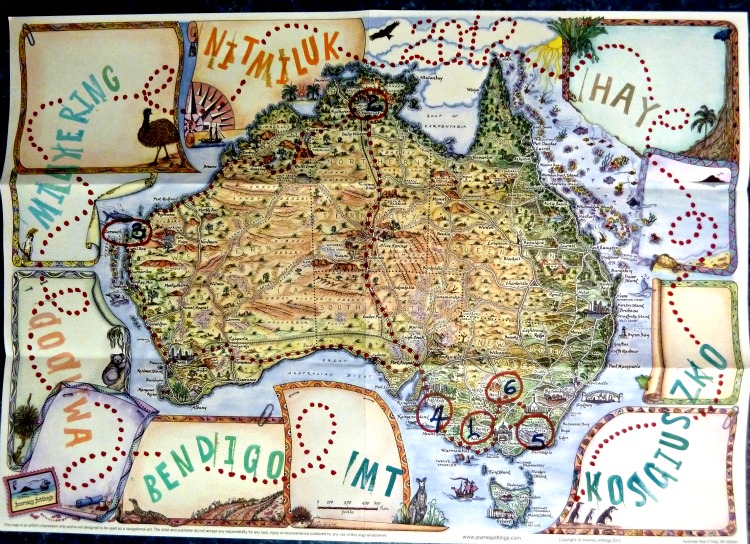 Joining the Dots in pursuit of better Travel Memories

“Just how many Journey Jottings products can a traveller zig-zagging through 5 Australian states and territories in 12 months spot?

WAAAAY too many to count!

Playing the tourist on a 3 day Bendigo bender in May 2012 reacquainted us with the fascinating gold-mining heritage of this sophisticated and attractive regional Victorian city – especially by sunset from the Poppet head lookout in the middle of town.

But don’t make the mistake of thinking gold-mining is a thing of the past!
The ‘Welcome Stranger’ – at 71+ kg (3123 oz) the world’s largest alluvial gold nugget – was found nearby, and looking for its twin is a national sport. 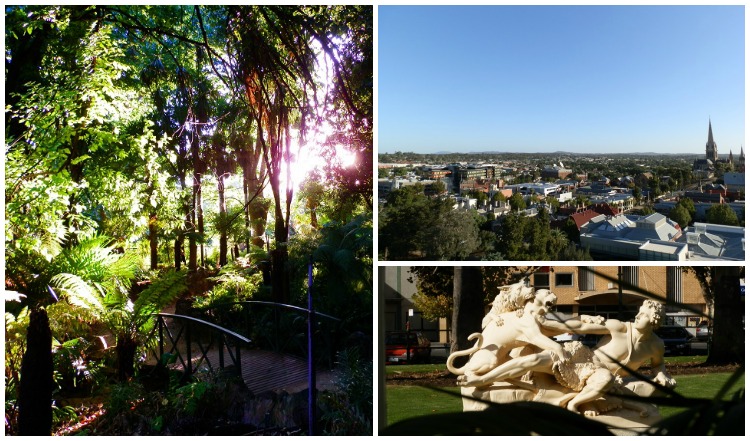 But don’t despair. This melodramatic marble statue contrasting superbly with the striking architecture and superb gardens surrounding it, was donated by a previous mayor to ‘reward’ the citizens of Bendigo and makes a fine consolation prize!

If you’d rather reward yourself more practically, take a tour of Central Deborah Gold Mine and stock up on Journey Jottings products in the gift shop!

In June 2012, I was sneaking a photo of the Journey Jottings display in the Nitmiluk Visitor Centre when I was sprung by a ranger (not nearly as painful as it sounds). Clearly expecting an explanation, I told him I knew the Journey Jottings designer! It was only a small white lie – although I’ve never met Linda face to face, she’s a blog buddy! How much closer could we be?? 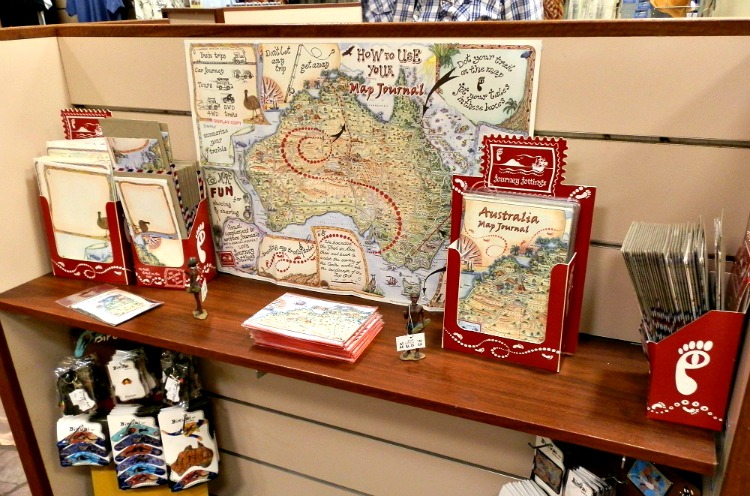 ‘Well, tell her from me to get an on-line share version,’ he stated. ‘Then people can plot where they are so their friends can see, and print the map out at the end of their trip.’ I quickly handed him a business card and we vowed to split the proceeds after I shared his fine idea with Linda …

… then promptly forgot about it as I lost myself in the grandeur of Katherine Gorge. 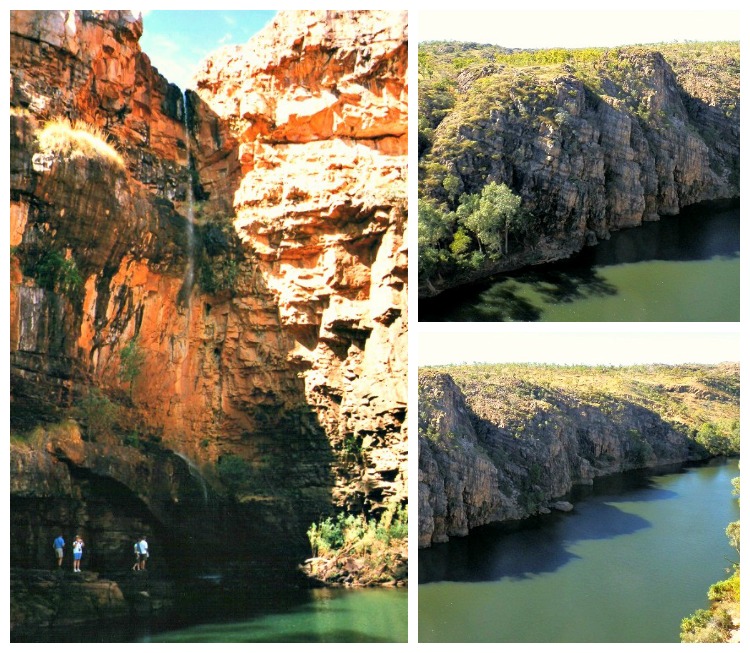 Nitmiluk Gorge from the famed Lookout, and getting up close and personal

The trio of young, cool guys rude enough to suggest we weren’t up for the tough gorge wall climb to the the lookout point overlooking the magnificent Katherine River also thought we couldn’t read the ‘Lookout Climb’ sign.
Wrong on both counts, boys!

SO … I notched up another experience for my map journal, to add to the Gorge cruise from our last visit! 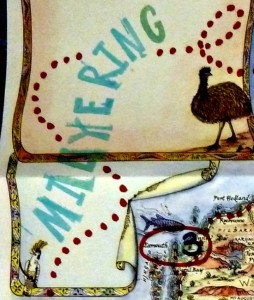 Yes, the photo below could’ve been taken anywhere … so you’ll just have to trust me when I tell you it was snapped during August 2012 in the shop and kiosk at the Milyering Visitor Information Centre, gateway to the extraordinary Cape Range National Park. 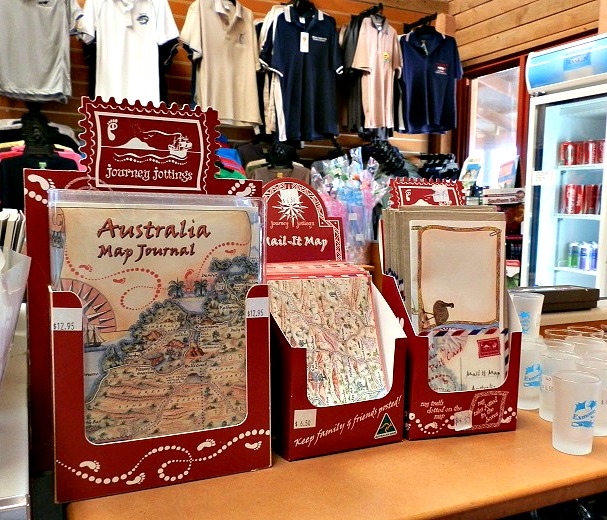 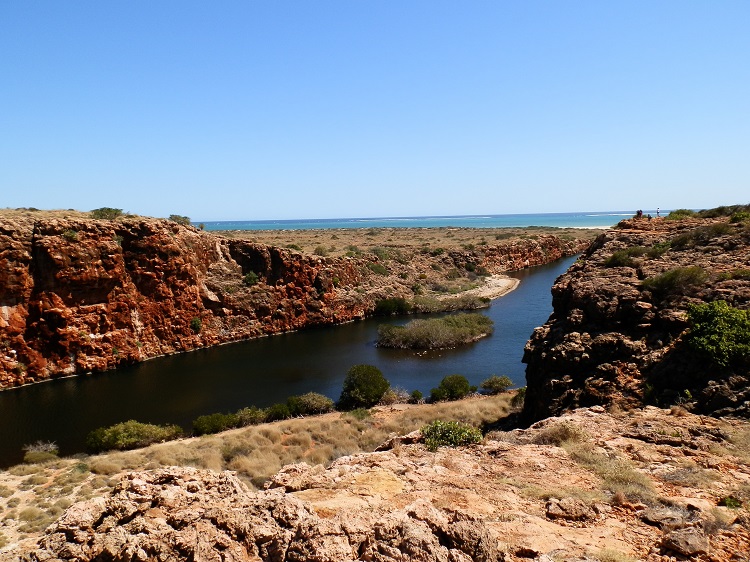 Of course I can’t guarantee that the Frenchman we met who kindly shared the secret of what he wore under his sarong will still be there for YOUR visit. But trust me! There are enough other attractions at Cape Range to make the visit worthwhile!!

Spectacular coastal scenery awash with glorious natural attractions marks the end of the Murray River’s journey from its headwaters in Mt Kosciuszko National Park. Australia’s longest river, and 16th longest in the world, the Murray supports millions along its 2520 km (depending on who’s measuring) length, and merges with the Darling to form the most significant catchment basin in the country.

Although the notorious 1956 floods are still remembered with impossibly high flood markers way above the current river level, the natural flow is more commonly affected by drought, upstream water allocation and irrigation. 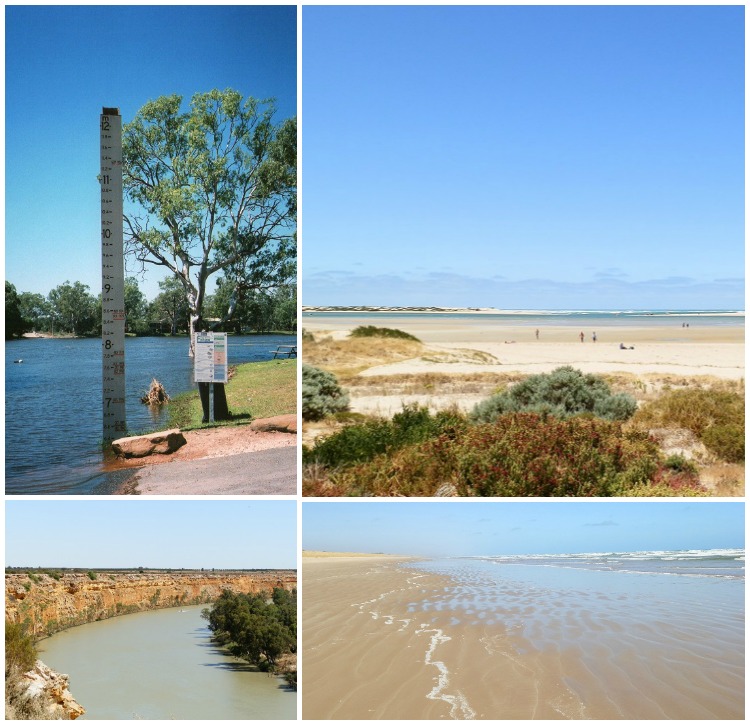 Goolwa where the mighty Murray meets the sea

So it was with a great sense of occasion we approached the mouth, free-flowing for once after a couple of good years, on a perfect South Australian summer day in January 2013.

Nestled amidst the Sir Richard Peninsula, Hindmarsh Island with its infamous bridge, the Coorong National Park, Younghusband Peninsula and the vast and windswept expanse of Goolwa Beach, the Murray River bar at journey’s end is a superbly scenic tourist attraction.

And just right to record on a Journey Jottings map journal you can pick up at the Goolwa Visitor Information Centre!

‘My mate was more worried than I was when the snake bit me,’ casually asserted the Jindabyne sales assistant. ‘Probably because it kept striking. I’m more bothered by spiders,’ he continued before telling us about the snake’s demise.

What kind of mad fools were these water wader-wearing Alpine fly-fishermen, anyway??

I’d have also thought twice about staying on the shores of stunningly beautiful Lake Jindabyne in March 2013 if I’d known that East Jindabyne, a few kilometres further round the bay, had the highest concentration of brown snakes in the country. Reportedly. So much for my theory that it’d be too cold for them in the shadow of Australia’s highest point, Mt Kosciuszko! 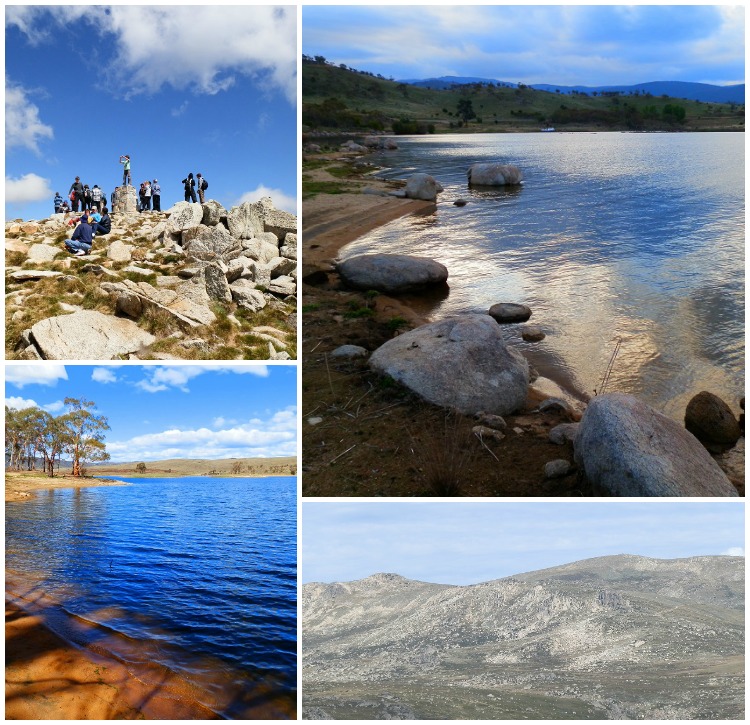 Jindabyne Lake and the peak of Mt Kosciuszko

Gateway to the extensive and spectacular Mt Kosciuszko National Park, Jindabyne was rebuilt on the shores of the lake after the original town was flooded during the construction of the Snowy Mountains Scheme, one of the engineering marvels of the modern world.

Inspired by the lofty surroundings and tales of big dreams come true, I couldn’t let a few deadly snakes stand between me and bagging the first peak in my Seven Summit challenge! So we climbed Mt Kosciuszko!! 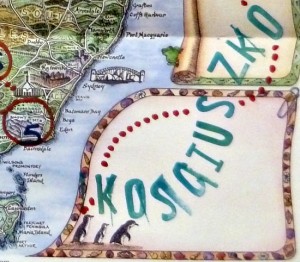 But not before spotting a clutch of Journey Jottings products at the Jindabyne Visitor Information Centre!

OK, I lied. But you get 6 superb sighting locations for the bargain price of 5!!!

Breaking our March 2013 journey while crossing the vast, flat expanse of the Hay Plain, known to many as one of the more featureless attractions – or attractionless features – of Central New South Wales, we called in to the excellent Hay Bakery for lunch.

And spotted this FINE display at the Hay Visitor Information Centre!! 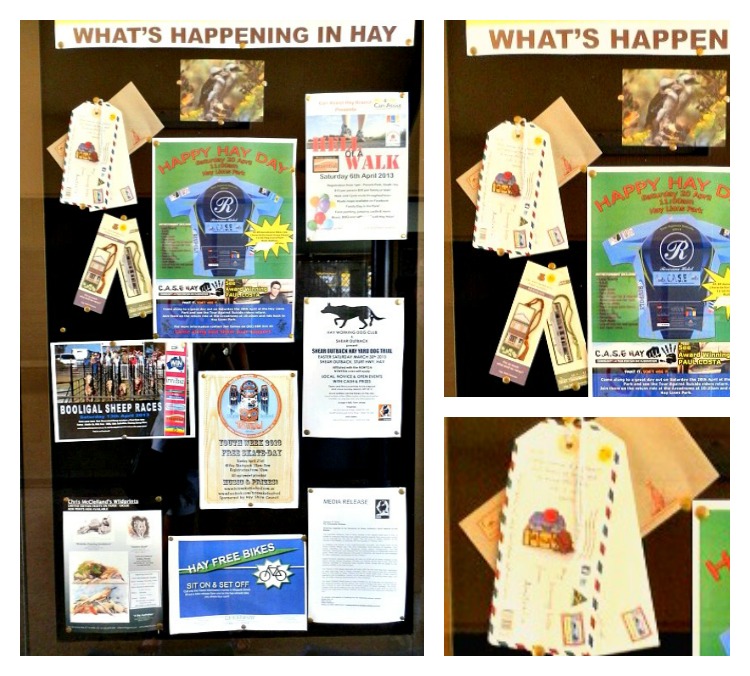 But a lack of features is a feature in itself, right? So you’d do well to remember that the Hay Plain is one of the few places where one can actually observe the curve of the earth … 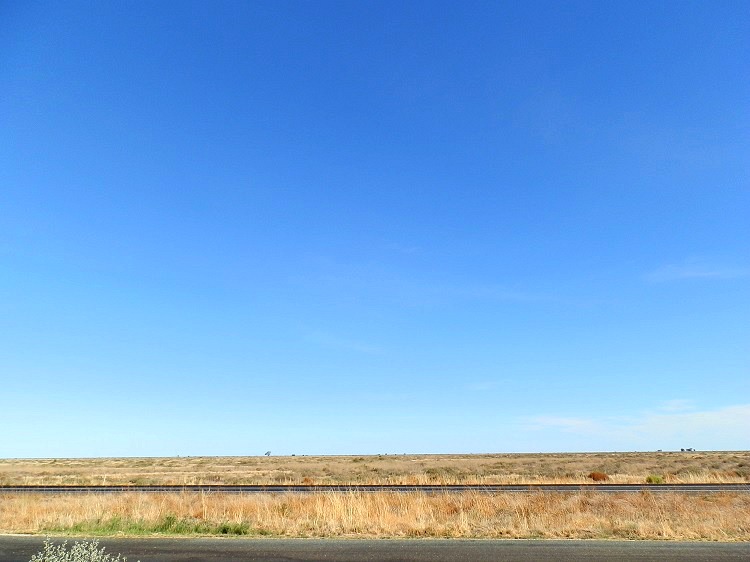 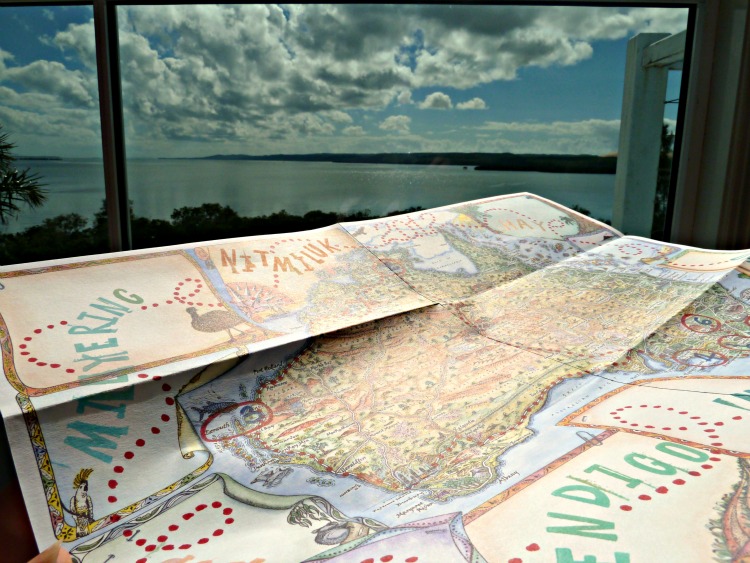 Have you spotted some Journey Jottings products on your travels?

Take a photo and email or post to our Facebook page (whichever is easiest) and I’ll post you a product of your choice – Just tell me which product you’d like to stake your claim! 🙂 9 thoughts on “Joining the Dots to Create Better Travel Memories”