How do you remember your travel and holiday adventures?

Or do you engage alternative ways and means to ensure as the ‘ole grey matter turns a whiter shade of pale you’ll have the fun of recounting and recalling travelling tales from times past?

Whilst photographs are one of the most commonly used mediums for their simplicity (point, shoot and the image is captured for posterity in a single click); as words are our predominant means of communication, verbal descriptions in travel journals are also heavily relied upon for encapsulating the spirit of holiday adventures.

But memories are triggered by what has been experienced by all of our senses – and even if you are a competent photographer, or have the oral capabilities of an eminent upcoming travel writer, there are other ways and means to record your trip that may even more suit your style.

We take in our surroundings through all five of our senses, so it’s not just what we see, it’s what we hear, what we smell, what we taste and what we feel through touch ~ Whilst taking photographs covers what we see, there’s a world of experience beyond vision alone.

One of the easiest additions to pointing and shooting a camera is recording sounds.

When about to start this series of posts on ways and means to record your trip, I asked on Twitter 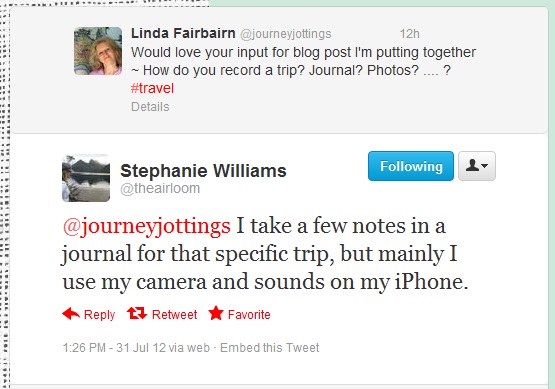 “I take a few notes in a journal for that specific trip, but mainly I use my camera and sounds on my iPhone.  I did it in the Middle East recently… listening to the street sounds really takes me back there.”

I can’t think of anything more evocative or transposing than hearing the language and street sounds of a distant land recently visited!

It’s not only language differentiations – wildlife in every region of the world is so variable. While we have the raucous sounds of sulphur crested cockatoos on our deck in Queensland… 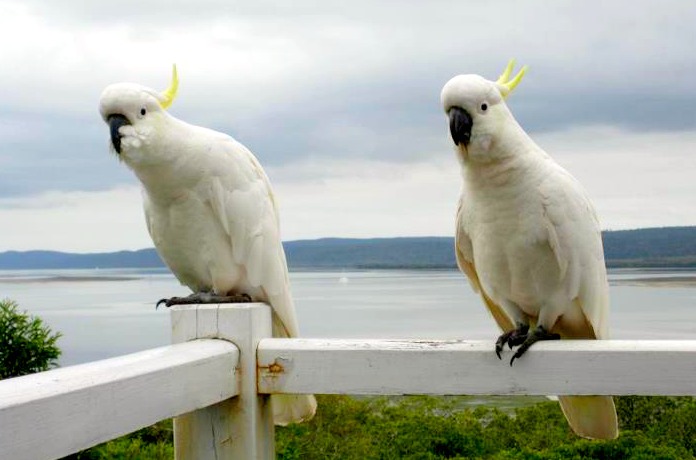 In Scotland you have the delicate songs of thrushes and wrens.

Then there’s the sounds of weather ~ The monsoonal tropical storms of the Northern territory in the wet season, with the cracking thunder, lightening and torrential water lashing the roof, windows and ground.

To the balmy breezes on golden beaches with gentle waves lapping the shore line.

When I first travelled to Australia, International telephone calls cost a fortune, so my family on the other side of the world and I would mail audio cassettes to each other. Apart from recounting events, I loved it when my mother would take the cassette player (whilst recording) down to feed the horses and the chickens – I could hear the gravel under her feet, the wind whistling past her face, the eager clucking of the hens as the corn was cast and the familiar whinny of ponies as a bowl of warm nourishing feed was put down inside the stable door and the snuffling began.

Recorders are incorporated in many mobile devices such as mobile phones and laptops, but if you’re not travelling with either of those there’s always the option of investing in a little hand held recorder.

I mention video recorders here only lightly, as while they do record sound, good video recording does require practice and some things are better kept simple!

I’m also tempted to say that what you hear – on its own – is more effective than a poorly produced mass of movement deflecting your attention from the clarity of pure sounds that genuinely reflect a region – One only has to think back to the days of radio plays and comedy radio programmes such as the Goon Show where mental images were left to run rampant, to make one appreciate the power of isolating our sense of hearing.

Focussing on just one sense can possibly offer a richer experience?

A while ago we ran monthly themed ‘share your travel stories’ on our Journey Jottings Facebook Page.

One month we featured ‘Music’ stories as the theme –

We called for both evocative sounds that transpose you back to where they originate, and/or music you’d never leave home without as they were perfect for truck’in along to!

Most contributors recalled traditional sounds from the region they were visiting, such as the Balinese Gamelan orchestra at gatherings, Irish folk music heard in pubs, and Peruvian pipe music, which Kaylene bought a CD of to take home.

But there was also the cultural pop music such as Kirsty heard in every “bus, taxi, cafe, restaurant and pension” when visiting Turkey and who purchased a copy of Turkish pop hero, Mustafa Sandal’s CD saying:

“I just had to return with his CD, for I knew in the future, listening to it would recapture those solo backpacking days, sitting on crowded, smoke filled buses in Turkey. Music styles are so evocative of a region, reflective of the country.”

4. Music transposed from your Culture

On the other hand some people enjoy to travel listening to music from their own culture and it’s upon re-hearing those favourite tracks and albums that memories of far flung countries come spilling back.

Such as Genevieve who having lstened to Peter Gabriel’s ‘So’ album as she travelled across Greece says:

“Now, almost a quarter of a century later, that album still has a profound effect upon me, and transports me back in time and place.  When I hear ‘In Your Eyes’ I can feel the volcanic sand of Santorini’s Parissa Beach burning the soles of my feet.”

Are you as aware of sounds as you are of images?

Have you considered recording them like you record photographs?

Do share in the comments below how you record your trip.