The Devils Marbles (Karlu Karlu) are located on the Stuart Highway, 400km north of Alice Springs and 100 km south of Tennant Creek, in the Northern Territory.

The first known reference to the name ‘Devils Marbles’ was by John Lewis in 1872 during the construction of the overland Telegraph line – His account reads:

“We passed through extraordinary shaped stones in the Davenport Range. The country was of granite formation and many of these stones were round like marbles. In fact they were called ‘Devils Marbles'”

The reserve covers over 1,800 hectares (just under 4,500 acres) across a wide shallow valley, which is strewn with spherical rocks of iron tinged granite. 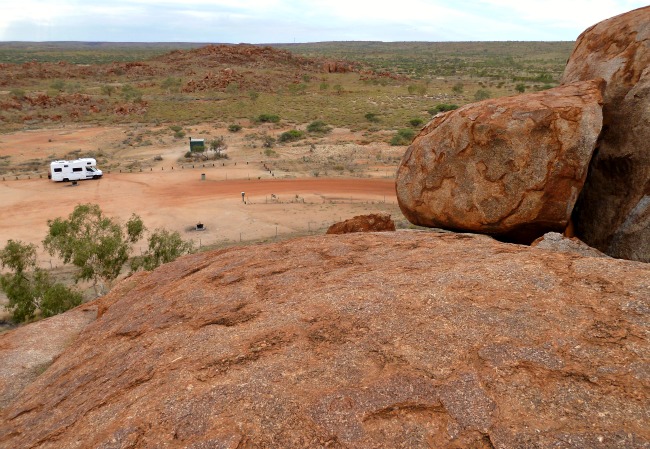 Camping at the Devils Marbles Reserve is permitted for a small fee ($3.30 per person when we were there November 2011), but it is basic! While there are fire places  provided you’ll need to bring in your own wood, and there’s also no water supplied – Just pit toilets.

The nearest accommodation is otherwise 8km south of the Devils Marbles at the Wauchope Hotel. 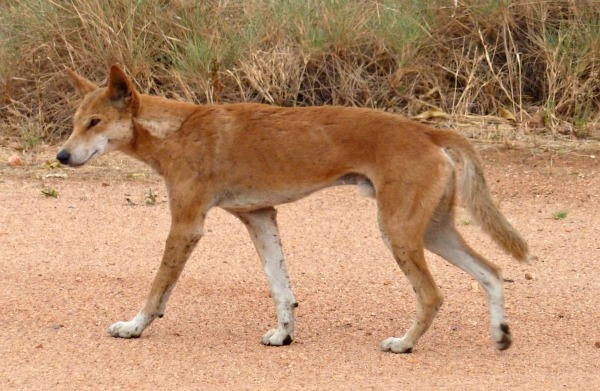 This dingo patrolled the deserted (apart from us) camp ground in the hope of scavenging some scraps – He was left disappointed. 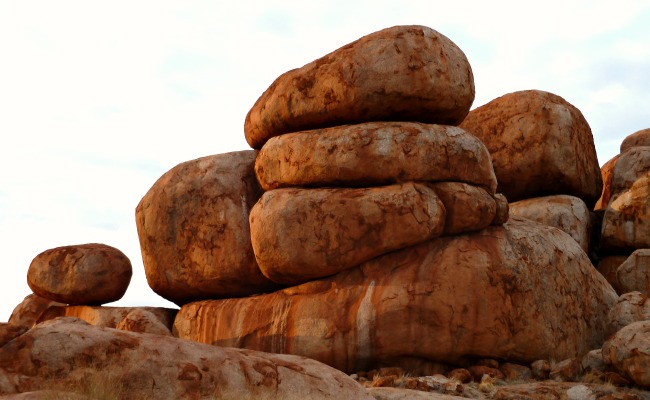 The arrangements of boulders, known by geomorphologists by such names as ‘cheeserings’ (due to their resemblance of flattish rounds of cheese); and ‘cottage loaves’ (for the pairs of boulders perched one on top of the other) have formed from the breaking down of a solid mass of granite, which still lies beneath them, leaving these spectacular arrangements of boulders on the surface for us to admire. 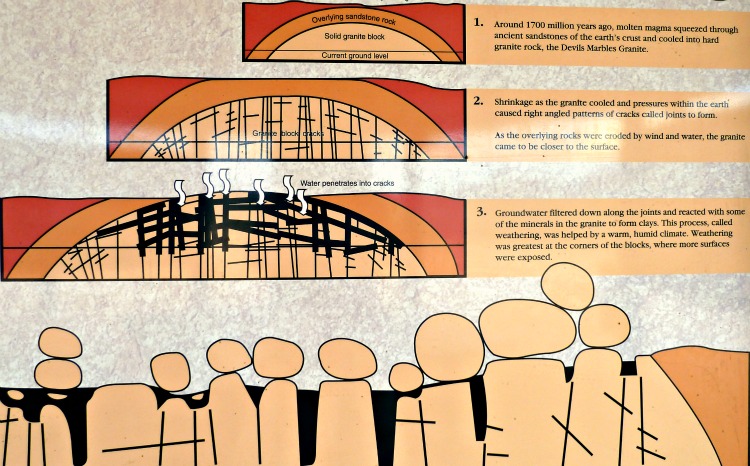 The process started about 1,700 million years ago when the Devils Marbles granite was formed from molten magma below a layer of sandstone. As the sandstone was eroded by wind and rain the granite came closer to the surface, which aided by weathering leaves exposed what we see today. 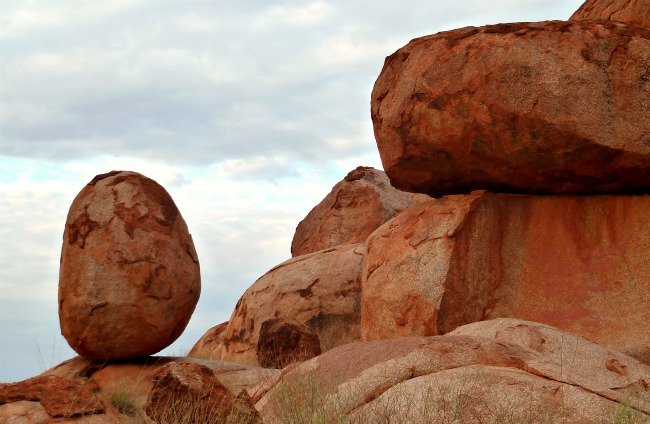 Granite is naturally a grey colour, but the iron minerals in the boulder when exposed to an atmosphere with water changes the surface colour to the rusty red we associate with the red centre. Whenever a rock splits the native grey colour at the rock’s core is exposed, as can just be seen in the photograph below. 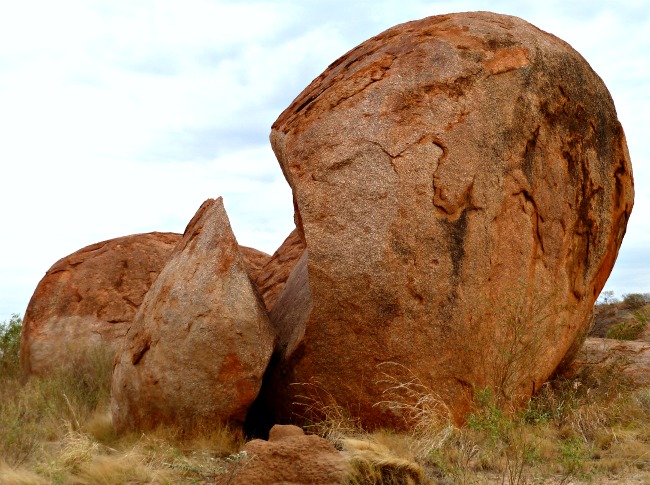 The cracking of rocks as illustrated above is called solarisation. Due to the extreme temperature differences between night and day the rocks are constantly expanding and shrinking resulting in some dramatic clean splits.

The four local groups of aboriginals that inhabited this area, the Kaytetye, Warumungu, Anmatyarr and Alyawarr, would gather in the area to drink as during the rains water collects in the rock holes high up on the rocks. 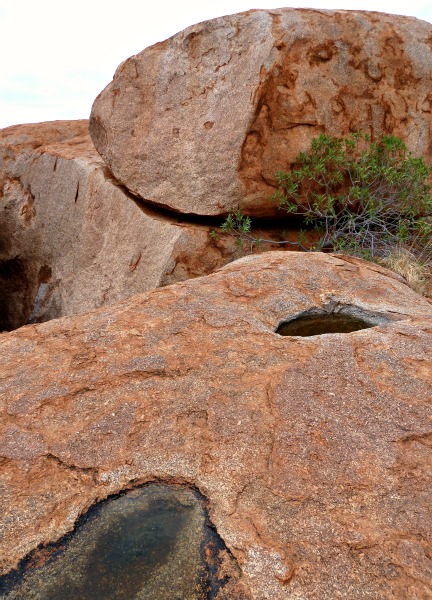 For these local Aboriginal people, the Devils Marbles are an important meeting place and rich in dreaming sites. 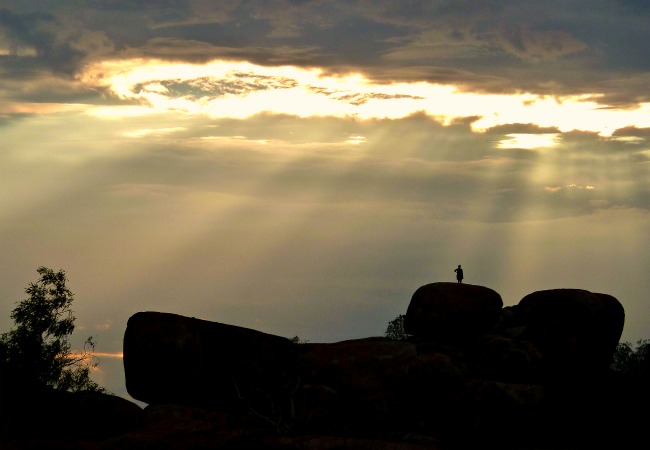 The expansiveness of the Australian bush is a wondrous environment to explore – Wide open plains scattered with gems such as the Devils Marbles.

We camped overnight at the reserve so were able to enjoy the sun setting shortly after our arrival in the evening, and after a quiet night (under not quite a full moon) 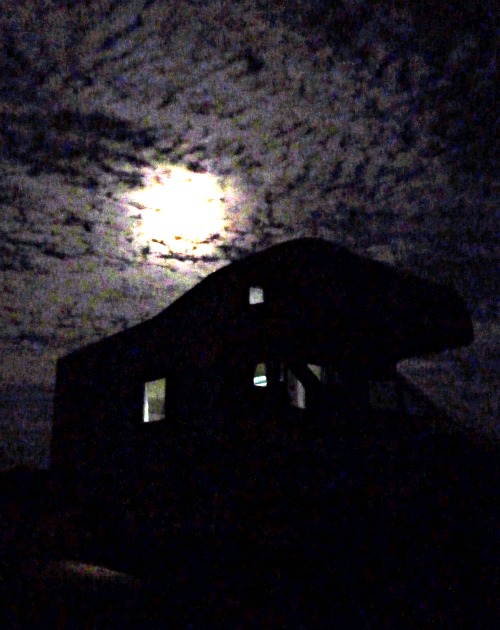 …at first light we stepped out into the cool still dawn air to breath in the outback atmosphere … and see the sun rise.

Have you been to the Devils Marbles? 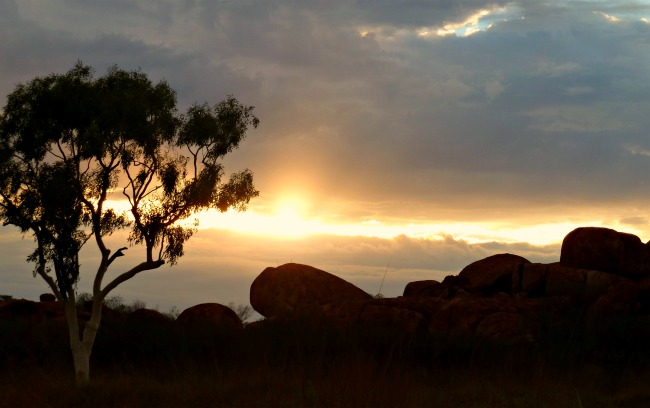