Having watched a stunning sunset when I first laid eyes on Uluru, followed by a superb sunrise viewed from the south side; experienced my first up-close encounter on the Kuniya Walk (where I discovered there are waterholes at Uluru), we made our way back around to the north side where we joined an Uluru Park Ranger taking a (free) guided walk along the Mala track to Kantju Gorge.

“The Mala people came from the north and could see Uluru. It looked like a good place to stay a while and make inma (ceremony). Men raised Ngaltawata (ceremonial pole) – the inma had begun.” 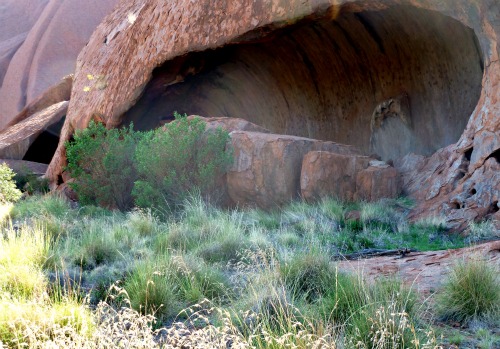 Cultural Sites Around the Base of Uluru

The Mala path is rich in traditional cultural sites, including a select few areas where no photography is permitted. The reason for this is that where rock details and features are equivalent to a sacred scripture describing culturally important information, they must be viewed only in their original location – It being inappropriate for their images to be viewed anywhere else other than at that site.

The walk passes overhangs and cave like rock formations that offered shelter to the Mala people, ancestors to the Anangu (prounounced arn-ung-oo) people, traditional owners of the area. 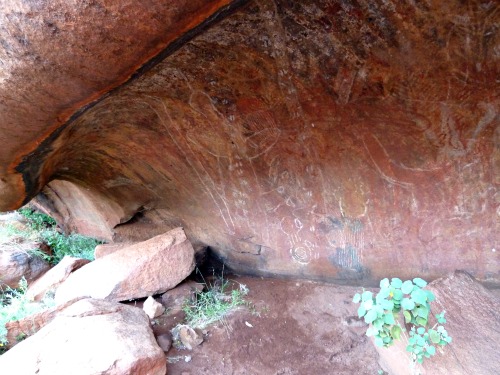 The Ranger had examples with her of a piti (wooden gathering bowl) and a manguri (head ring) for balancing and carrying the bowl on one’s head. She described the Mala people’s cultural way of life, how they made tools with malu pulku (kangaroo sinew) and kiti (spinifex resin), and she explained the rock art imagery represented on the cave walls.

Close to the ground of this cave wall one can see a circle with concentric rings. This represents a permanent water site (Uluru). 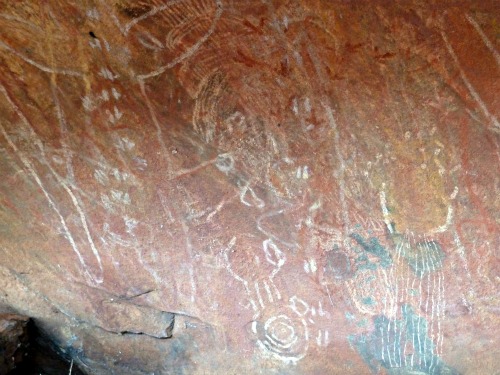 The circle above it with no inner circles is an area of no permanent water supply and in this case represents Kata Tjuta. Whilst when we visited Kata Tjuta (later in the day) there was water present, it is not a supply that can be relied upon during drought.

How the Mala Community Lived

Members of the Mala community performed their respective tasks in groups defined by gender and age. 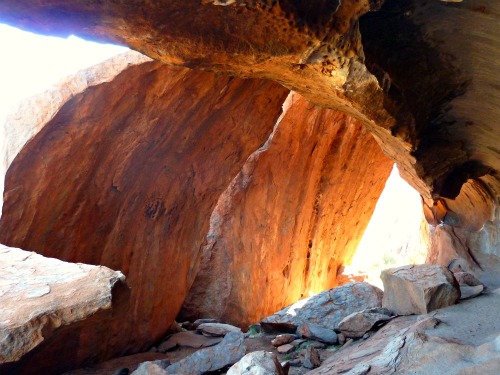 We saw the Kitchen Cave where minymas (women), kungkas (girls) and small children would have camped.

“The minymas (women) would go out into the bush to collect mai (bush foods) and return to the cave to process them.”

Here you could see rocks smoothed from grinding seeds into a flour, which when mixed with water and cooked on hot coals produced a nyuma (flat bread).

Food was brought to this area to share. Men hunted for the kuka (meat) and women gathered nyuma, fruit, seeds and roots. Collectively prepared it was then distributed to family camps, the old people’s cave and to the nyiinka (bush boys) camp 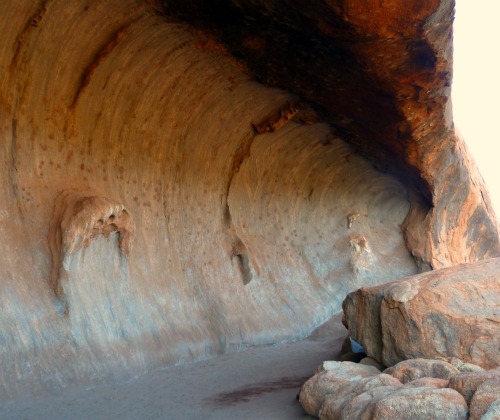 The Mala Story Set in Stone

In the senior Mala men’s cave they camped and preparerd for inma (ceremony).

“In the middle of preparations. Two Wintalka men from the west approached and invited the Mala people to join their inma in their country. The Mala people said no, explaining their ceremony had begun and could not be stopped.

The disappointed Wintalka men went back and told their people. They summoned up an evil spirit, a huge devil-dog called Kurpany, to destroy the Mala inma. As Kurpany travelled towards Uluru he changed into many forms, from mikara (bark), to tjulpu (bird) and different grasses. He was a mamu ghost.

Luurnpa (kingfisher woman) was the first to spot him. She warned the Mala people but they didn’t listen. Kurpany arrived and attacked the men in this cave. Some were killed and they turned to stone. The remaining Mala people fled to the south with Kurpany chasing them.”

The faces of those men can still be seen with their white hair and beards on the back wall of this cave ~ The Mala story is set in stone here. 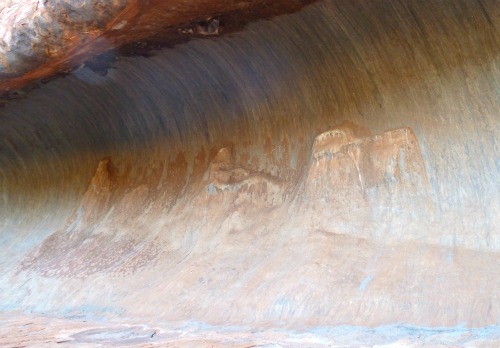 The Anangu people have successfully hunted and gathered in this land for generations passing down their stories and celebrating their ceremonies.

The route of the climb on Uluru is associated with important Mala ceremonies. Aboriginal belief is that during the creation period of Tjukurpa (pronounced: chook-orr-pa) Mala men took that route when they arrived at Uluru, so it is a traditional route of spiritual significance.

Through education the hope is all will understand and respect their law and culture by not climbing. 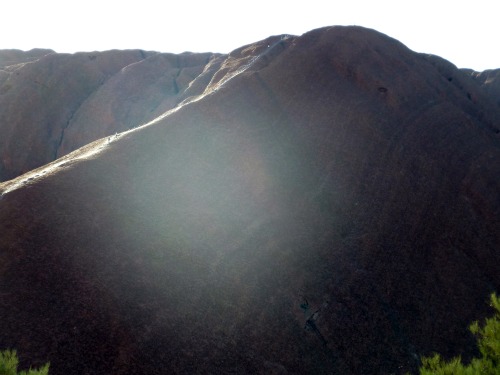 I took 100’s of photographs of Uluru in a bid to capture its monolithic magnificence in the multitude of hues it turns throughout the day – hazy lilac, plum purple, rusty orange through to its classic redolent Uluru red…

But only one photo of Uluru came out black ~ The Climb.

There is so much beauty to be experienced at Uluru,

is there a need to trample on it? 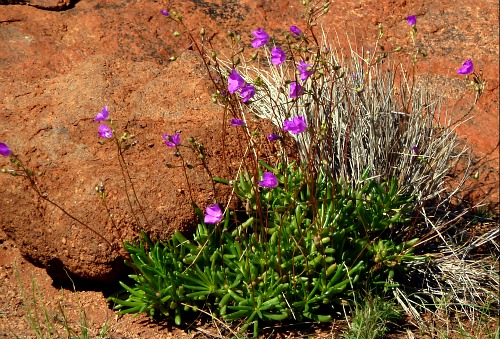 Rising to 348 metres above the plain, it is thought Uluru could reach down to 5 or 6 km below the surface ~ What we see is like the tip of an iceberg 😉 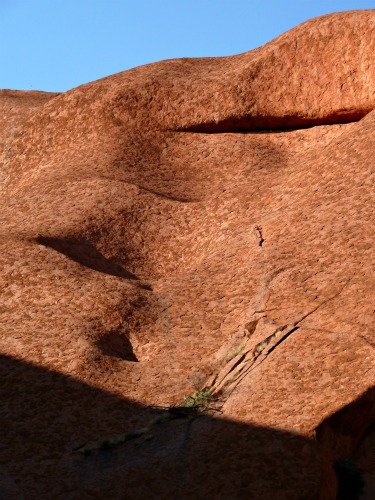 Uluru’s red colour comes from the iron minerals in the rock, which when weathered by water and oxygen, rusts like iron. 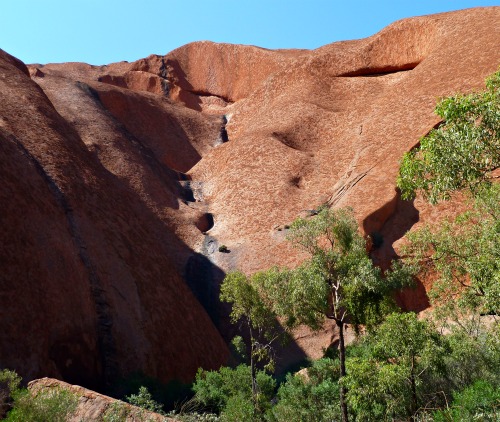 Uluru is made from a sedimentary rock called arkose sandstone, its apparent soft folds having been smoothed by wind and rain over aeons.

But, here at the end of the Mala Walk… 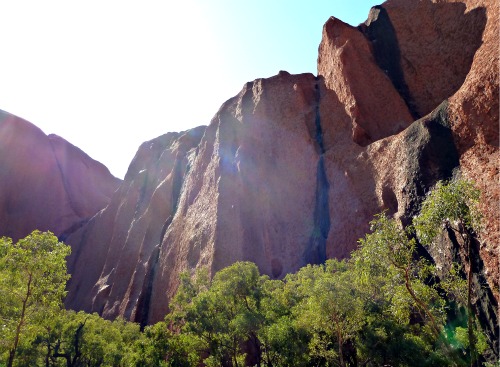 are the sheer sides of Kantju Gorge 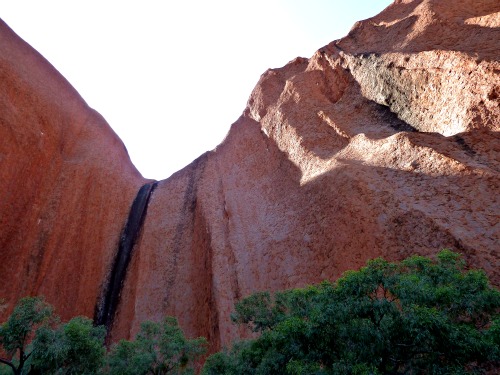 And at the base of the dark algae stain, where rain gathers and tumbles

is another precious waterhole. 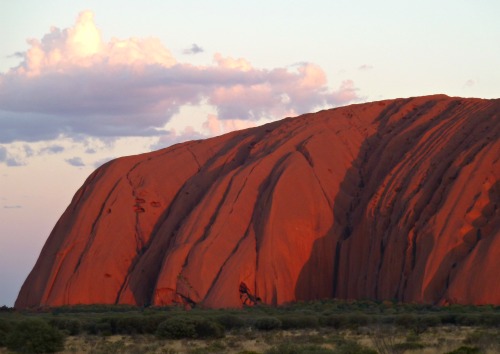 …from soft folds and crevices, to sheer brazen walls.

…from rusty red to a purple haze

Its an experience not to be missed 🙂

Have you been? Or is that trip still on the ‘bucket list’?

Do tell in the comments below!

28 thoughts on “Another Side of Uluru”