I’ve only ever seen a koala in the wild twice.

Once in a beautiful piece of eucalyptus forest in northern NSW where tucked high up in the fork of a tree between trunk and branch the koala was perched, or was it wedged? 😉 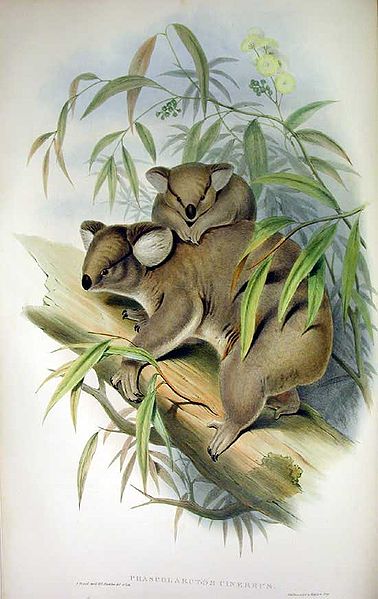 Koalas are not mammals (nor are they koala bears!) but rather they are a marsupial meaning their young crawl into a front facing pouch when only a centimeter in length, where they attach themselves to a teat to spend the next 6 months suckling milk and growing ~ When they emerge from their mother’s pouch they spend a further 6 months with her either riding on her back or clinging to her abdomen returning to the pouch for milk (in between the odd eucalyptus leaf) until it is too big to fit. The joey will finally leave its mother at between 1 and 3 years old, depending on when the mother has her next young. 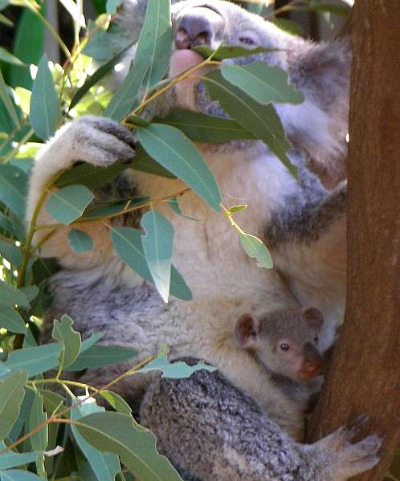 Koala with young in pouch

Koalas are not found in either WA or Tasmania ~ Their habitat covers an area roughly from Adelaide, South Australia to the southern part of Cape York in Queensland, around the coastal regions and inland as far as there is sufficient moisture to support their preferred woodlands. While there are over 600 differing types of eucalypts in Australia, koalas are quite selective only browsing on a select few species within their area.

They are essentially nocturnal, although there is a fair degree of overlap here as they sleep up to 18 -20 hours! Conserving energy is a necessity whilst digesting their gum-leaf diet, which is fibrous, low in nutrition as well as being toxic. 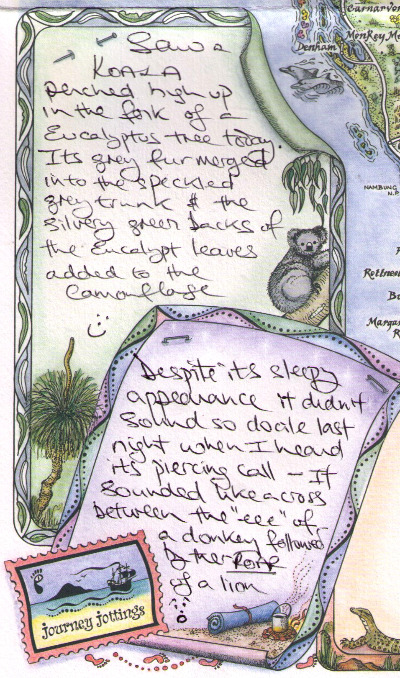 A koala’s docile appearance dozing in a tree by day belies the noise they are able to make when fully awake at night!

It was like the start of a donkey’s ‘eeyore’ but having gathered breath on the ‘ee’ expelled it not with a mere ‘yore’ but a roar like a lion! I have since heard their ‘call’ referred to as a bellow.

Have you seen a koala in the wild?

Editor’s Note: I’ve since found this interesting post by Michela who volunteered at Australia Zoo caring for some koalas