“This morning we had a change in the way of the Scotch mist, which was far from agreeable. However we have done a better pace today varying from 4 – 10 knots an hour. We saw a shoal of porpoises this morning. 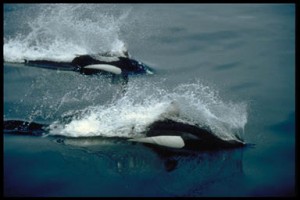 There were 1000’s of them and many dozens were so near the ship that if we had only had a harpoon on board we could have caught plenty, but of course such a thing was not to be had. During the night some penguins passed us; they must have been driven off from the coast as they do not venture far so the 1st mate tells me. Today the men have been making a shioke net, to catch the drunken sailors in if they fall, when getting on board while in dock. One of the sheep were killed this afternoon but I’m afraid we shall not taste much of it. By the kindness of the 3rd mate who gave us a tin extra of preserved meat & of the cook who collared some vegetables we had a grand dinner today. Bed at 9pm”

Extract from A.Whelen’s Australia travel journal sailing aboard the Hesperides from England in 1878