“Fishing all the morning for Joey.

Salt junk for dinner; the cook says eating this is very much like kissing one’s sister, very tame work & not much flavour.

Today they had the donkey-engine alight to make some fresh water, as that which was remaining was very rusty. One poor fellow last voyage came out all over in iron-moulds so they say but I did not see it so can scarcely credit it.

I will now give you my experience of crossing the line. 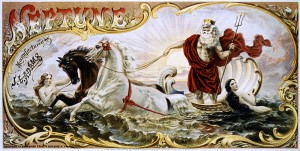 Last night Father Neptune appeared over the bows of the ship carrying a blue light & after hailing the ship & asking if we should be ready to receive him today & the answer being given in the affirmative he went away.

At 12 to day we received a severe shock as we had run against the line & directly after Father Neptune appeared carrying a trident with a red herring on the top. He was accompanied by his officers & wife.

First they unshipped the cannon & drew him around the ship, then they went & shook hands with the captain, after which he seated himself on the throne which was the carpenters bench elevated about 10ft above the deck & elaborately decorated with bunting & etc.

He then got a list of the names of all on board & said he perceived that Mr Brown had not crossed the line before & must therefore be initiated into the mysteries thereof. First they lathered his face with a solution of dirty water, the contents of the pigsty etc & then they asked him where he came from & as soon as he opened his mouth to answer, in went the brush of lather; then he was shaved with a piece of rusty iron, from one of the casks (about 4ft long). After this he had to take a pill composed of pepper, mustard, salt etc & then gave him a gentle push into a large sail full of salt water (abt 4ft deep) where some of Neptune’s officers were ready to duck him.

This finished the first victim & they were about to do the rest of us, when I awoke & the above must only have been a dream as we crossed the line soon after dinner & there was no spree at all as the Captain would not allow it there having nearly been blood shed last voyage as one of the men would not be scraped & took out his knife to prevent them but all was useless he was ducked worse than ever.

In the evening Joey & I paid a visit to the apprentices & had some bottled ale to celebrate the event & went to bed at 12.30am”

When A.Whelen’s sailed from England to Australia in 1878 he kept a travel journal recounting his adventures – such as crossing the equator