“Up at 7.30 after a better night as there was less rolling. It is a beautiful day & as warm in the sun as any summer day. A dead calm has been on all this morning & we have actually been going backwards at times. The men have been busy to-day moving a spare spar which was no joke for it took all the men to move it at first. (Our main cross-spar weighs 8 tons & this one they have been moving is a similar one. We are now in lat 43 & long 21E. We did 121 miles yesterday & during the last 10 days we have done on an average 230 miles a day which is first class. If we want to get to Melbourne now before Xmas we must do at least 9 knots an hour uninterruptedly. 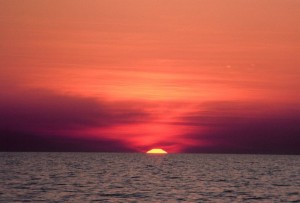 Extract from A.Whelen’s travel journal aboard the Hesperides sailing from England to Australia in 1878