“Up at 8 after a good night & the sea is now fine & quiet but at 1pm more wind and rain came on. As it is likely to prove a soaker for the rest of the day I will endeavour to give you a few particulars concerning the ship…

The Hesperides was built in March 1875 & is now chartered by Messrs Taylor, Bethell & Roberts. She is 1338 tons register A1 at Lloyds cost 23,000 pounds & thus far they have written 3,000 pounds off. Last voyage on the road home from China she met with a hurricane off Zanzibar & had every mast & all her rigging carried overboard which cost the company 7,000 pounds for repairs. At this time she had 630 coolies on board for Demerara & abt 50 sailors making in all nearly 700 souls. The former had a fine time of it as they were battened down for 4 days.

She is now in fine condition & is on her fourth voyage. 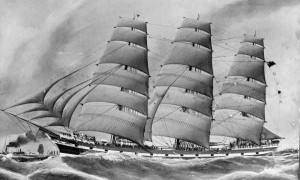 Besides the Captain we have 3 mates, 3 apprentices, carpenter, engineer, cook, steward and boy, sailmaker and boatswain. We have 13 sailors and a 1 shilling a month man who only is working his way out, an ex- captain of the company who has lost 2 vessels for them and the stowaway named Elvin who was found in the hold soon after the tug leaving us. He is an engineer by trade but finding business so bad determined to return here where he had been for 4 or 5 years before. Our captain’s name is Upton and seems to be very decent fellow and a thorough Englishman I should think as he has 432 bottles of beer on board for his own private use and seems as if he enjoyed his pipe.

The cook is a very jolly old fellow & has made us all as comfortable as it is possible for anybody to be on board. 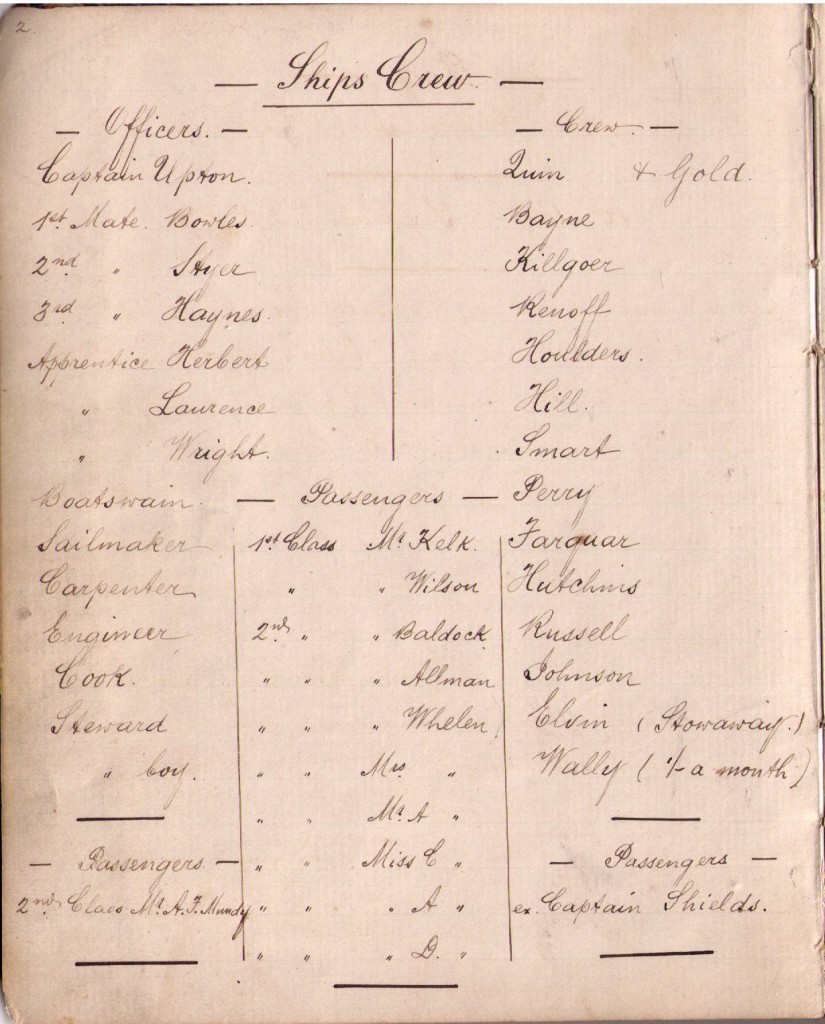 Our 2 first class companions are named Wilson & Kelk. Wilson has done very little work during his lifetime from what he says. He has studied some little in the medical line but is rather gone in the upper part of his head. Kelk is called by the sailors the walking corpse. He is very delicate & will not last very long I am afraid. Both of these gentlemen are suffering from nervous debility.

Our 2nd class confederates are 2 young fellows by names Allman & Baldcock (known amongst us as Smith & Brown.) Both have broken blood vessels & have come out here for health’s sake principally. Then there is my old schoolfellow Arthur F. Mundy (known as Joe on board after Pickwick, having grown so fat) who is the life of us all being always with us, having meals altogether; he says he is in a consumption but if you were to see the consumption of food by him it would be quite sufficient. Besides these there is our own little circle of 6*. (*Mr Whelen the Guv’nor, Mrs Whelen, Mr A. Whelen, the writer of the journal & 3 girls Miss C., Miss A & Miss D.Whelen ~ Clara, Ada & Daisy, known as little Dux)

Sailing Ship Farm Animals (for food along the way)

This now finishes our two legged friends & we will now turn to the four-footed. We have 3 cats Peter, Sonit & Carrots which belongs to the cook. The poultry does not come to our lot as it is destined for the 1st class. Then there are 2 sheep & 3 pigs and with the exception of a few cockroaches this closes the chapter.

As we go along I notice that we lose on average 10 minutes a day which we shall continue to do till we are in abt lat 40 S.

Today is Clara’s birthday but not all of them being well it will be postponed a day or so.

This is from an antique hand written journal by A.Whelen while aboard the Hesperides sailing from England to Australia in 1878